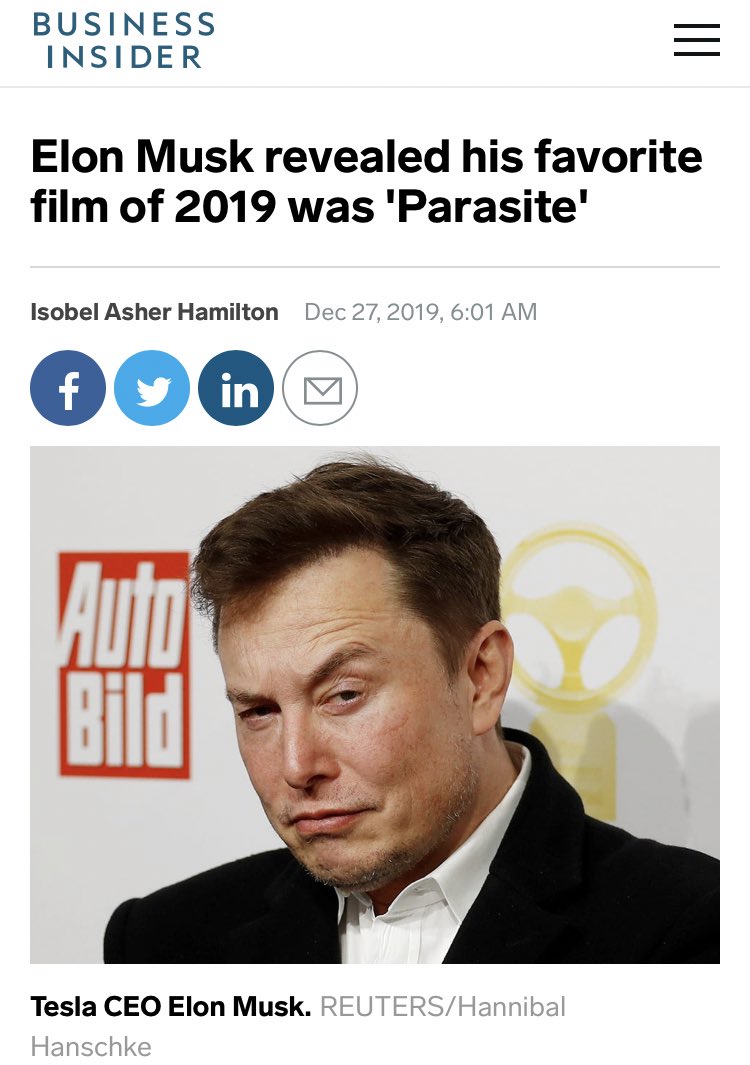 In the recent Palm d’Or-winning movie Parasite, by Bong Joon-Ho, class issues play a central role. The crushing social inequality between two families – the Parks on top, the Kims inhabiting the dirty underworld of the metropolis – is an easy blueprint of our times. On one side, a luxurious villa provided with space, fancy food and well-mannered interactions. On the other, a reality of intermittent jobs, beers for dinner, and no Wi-Fi. One family is the dark doppelganger of the other.

Yet, we don’t see the Kims paralyzed by their life conditions. They live in precariousness, but they are not overwhelmed by it. A strong will to ‘make it’ orients their actions, while they try to suck up everything they can to make ends meet. Contrary to the immobility of the rich Parks, it’s the fluid entrepreneurial spirit of the poor that gives the movie its fast narrative pace. To bring their family out of misery, the two siblings, Ki-woo and Choi, set up a cardboard empire of previous work experiences and fake professional identities. They make up their curricula and pretend to have fictitious job skills. We discover soon in the movie that they use their inventiveness as a bump key to secure a place in the Parks’ home. By pretending to be someone else, they verge between the aspiration for a better life, precarious conditions and the constant threat of being unmasked.

To deconstruct the ambiguities of this condition, the author provides a brief genealogy of the ‘entrepreneur’, that moves its steps in the wake of the Californian ideology. He shows how moguls like Elon Musk, Jack Ma or Steve Jobs transcend the narrow realm of work ethics’ heroes, and project their shadows onto the world. Entrepreneurship is today a “mindset” that does not consist (only) in “doing business” or managing a company, but has turned into a lifestyle. The discursive production of entrepreneurialism has so well invaded the communicative sphere that it has become a “matter of common sense” to think of individuals as natural-born entrepreneurs. Subjects orient their actions according to techniques of good management, as they would do with a start-up company.

This “entrepreneurial naturalism” that shrouds society at large, manifests first and foremost as a system of “core values”. Lorusso echoes Mark Fisher’s capitalist realism2, stating that these values occupy all the horizon of the possible, so much so that they stand firmly unquestionable. They resonate with the necessity to always think positive, be enthusiastic, proactive and to “work hard and be nice to people” – as suggested by a famous motivational poster. All of this presumes a “magical voluntarism”, where achievements and results are the natural consequences of passion, effort, and commitment to the cause.

Truth is, that being a shark in the sharks’ pool is no easy task. The right attitude is what is needed to perform well and to survive the increasingly competitive social environment. Those who don’t have it, can only “fake it till they make it”.

Faking does not necessarily mean lying. It has a subtler nuance, as something that will happen if we choose to deeply commit to it and make it our own goal. This is why, as Lorusso argues, entrepreneurialism lies essentially in the “hacking” of one’s own mind. We can train our mindset to be resilient to change, to seek innovation and – funny enough – to exploit precarious and flexible life conditions. To always think positive is key to act positive. Yet, by stressing the importance of one own’s free will, the entrepreneurial narrative conceals structural imbalances of power, filling the void caused by the dismantling of social security systems and individualizing signs of success, as well as negative outcomes. A society of isolated and competitive individuals, as praised by neoliberalism, comes to the fore.

Instead, what workers constantly face is a ‘real’ reality of increasing everyday life difficulties, such as low incomes, burn-outs and emotionally unstable conditions. This situation strikes with the expectations linked to a blurred, yet very strong, idea of social and professional success, that permeates all social strata.

That’s where the entreprecarious condition unfolds. The other side of the entrepreneurial coin shows messy working schedules, over hours, endless networking aperitivi and the ceaseless effort of self-valorization.

Entreprecariat marks the coexistence of these two dimensions in a sort of schizophrenia; the distance between the reality of precarity, within and outside the world of work, and the entrepreneurial mantra that orients our actions, can only produce a “cognitive dissonance”. The psychological dimension of entreprecarity is frequently remarked. Lorusso’s entreprecarious subjects – including him – belong to a (mostly) western highly-educated class whose job is to ‘think for a living’: they are artists, educators, researchers, knowledge workers. Their mind is both a means and a site of production. As such, it’s the place where entreprecarity occurs and reveals its logic.

The entreprecarious individual is the puppet of the neoliberal rationality. As a technology of the self, as Michel Foucault would have it, entrepreneurialism penetrates the individual and underpins personal behaviors, choices, or simply the “project of one’s own life”. As a power that emanates from inside, subjects lose the capacity to indicate the source of their own misery. The same that is actually condemning them to a continuous emotional roller coaster between precarious satisfactions and toxic feelings of powerlessness. “Nobody is safe”, because everybody is at once the exploited and the exploiter of one’s own self.

This state seems to be almost impossible to fully grasp, let alone starting to think of ways to struggle against it. What is difficult to discern on a subjective level, hardly informs the collective consciousness of an amorphous group of individuals. In other words, the question is if the entreprecariat can express a “psycho-class consciousness”, as the one advocated by Geert Lovink in the introduction to the book. Also, if it can produce the conditions to act for its own emancipation. The heterogeneity of professional profiles and individual paths, shaped by social and educational structures that harness workers to “think rich and live poor”, prevents the full disclosure of practices of subjectivation that can act towards liberation. The very same that would allow for an “entrepreneurship of the multitude”, as the one envisioned by Toni Negri and advocated by Lorusso as a possible “exit strategy”. The experiences of the entreprecariat are impossible to trace back to a common denominator, as they overlap in countless differences that seem to be tied together only by the overwhelming reality of entreprecarity itself.

Lorusso’s interest is equally concerned with the way entreprecarity is immanent in the world we live in, and how it is reproduced by the endless universe of memes and motivational posters that inhabit the web, that constitute the graphical counterpart of the book.

Yet, his is not a social theory essay. He also has no claims of drawing a general theory: entreprecariat “defines the reality that surrounds me (and therefore represents me)”. Nevertheless, his take suggests that the condition is the one of an ever-increasing number of people, not just among the cognitariat lines. As Guy Standing argues in The Precariat 3, ‘precarisation’ is a process – the one leading individuals to precarity. The same happens for entreprecarity. Its doors are always open, and everybody is at risk of falling in the trap.

The Kim family of Parasite lives in existentially precarious conditions that middle-class members will rarely encounter in a lifetime. They dwell in a cockroach-infested semi-basement where they can barely walk erected. Their only way out takes the form of a witty yet desperate form of self-entrepreneurialism. The same that is demanded to the mass of underpaid workers operating in the grey-spaces of gig economy, sharing economy, or digital labor. If we look at the ‘jobs’ offered by sites like Amazon Mechanical Turk, where a huge number of low-skill tasks are to be performed for a few coins, we confront the entrepreneurial logic of the platform itself. Lorusso sharply addresses the functioning mechanism of three of these platforms: Fiverr, where creative works are outsourced to a potentially infinite community of employees for the price of a McDonald’s burger; LinkedIn, the curriculum-obsessed social media, where the profile pic and the size of your network plays a bigger role than any (real or claimed) professional skill; and GoFundMe!, a crowd-funding platform built upon the need to finance personal projects, be it a tiny-bit-too-expensive university master, or a kidney transplant for a relative in need. Ultimately, these systems produce and reproduce the ‘uberisation’ of work, and they aliment the logics of competition, the perverse dynamics of toxic self-valorisation and the precarity of self-employement. Entreprecarity does not concern only a West cosmopolitan youth that constantly feels under threat of being declassed from its middle-class position and of losing its economic, social and positional benefits. It extends way beyond, showing another face of the totalitarian logic of neoliberalism.

Play and Reality: the Secret Tapes