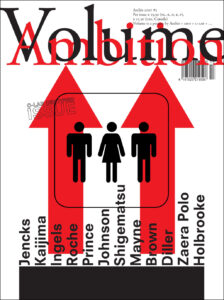 Our field, and perhaps every field, is defined by ambition. To know ourselves we have to know ambition. But ambition is far from simple. It is never straightforward, never the singular drive it appears to be. Rather, it is a set of interacting forces in which often the means are mistaken for ends. This issue of Volume on Ambition offers a preliminary map of what has become a landscape of misguided purpose.

Ambition is not the drive for personal gain. Elizabeth Diller reminds us in her contribution, Mediagenics, that it is reductive to think of ambition as the raw determination to achieve power or fame. To have ambition is to have also a particular goal. However, this goal is difficult to ever know. What is disclosed by the ambitious is merely the objective to attain a desired position or status, but not what will be done with it. Someone may declare a desire to be President but who knows what he or she will do once they succeed?

Maybe it is the difficulty of determining what drives somebody that shifts the discussion to what he or she is supposedly driving toward, like a position of power, celebrity, or respect. With all the skill and assistance the ambitious architect has to cultivate his or her public persona, it is easy to get sucked into the ambition effect. The buzz of excitement generated around any given architect’s accomplishments makes it seductive to aspire to that level of power or fame. We would suggest that wanting power or fame misses the point that architecture offers much more. For one thing, it breeds other riskier forms of conquest, as Diller suggests. In fact, this myth of ambition so thoroughly runs through the field that it functions in place of an end goal itself, which Mark Wigley explains in Mutations of Fame. Being in contact with celebrity is increasingly the organizing principle of the academy, determining staffing, the transfer of knowledge, and the ambition of students, an all-engrossing economy that mirrors the organization of the architecture office.

That said, this issue is not about proposing to expand our ambitions beyond power and fame. Instead, it examines how much our ambition has advanced as a result of the field having more of both. In their respective interviews, Alejandro Zaera Polo and Bjarke Ingels talk about power and celebrity not as goals to attain but as means. Each in his own way argues that these are newly available channels, and without swimming in them it would be impossible for the architect today to realize a good (or, super cool,) building. In The Knowledge, Keller Easterling observes that they provide access to a feedback loop of give and take. As a public figure, the architect gives knowledge. In turn the architect takes back information about the dynamics of political influence. In recent years we have seen that the ambitious architect uses this information to refine his or her tactics to then pursue even bolder projects: in other words, power and celebrity are sources that strengthen one’s means. Moreover, they allow the architect to act as an intellectual. In a position of power or celebrity the architect shares and acquires knowledge, not just to better maneuver politically, but also to gather information about the actual consequences that our field’s actions have in the public domain. Who knows what the ambitious will do with this knowledge, but we hope you will begin to share their informed sense of purpose as you read Ambition.