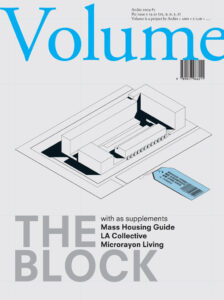 Vast urbanizations in developed, developing and under-development countries have one common denominator: an immediate need for quality housing. Housing the billions: never before were those involved in architecture and construction confronted with such a challenge.

A one-size-fits-all solution seems unthinkable since most mass housing schemes in the past failed and originated in dictatorship or total absence of power. Based on an analysis of one of the housing experiments of the past, the Soviet Microrayon, Volume proposes a new prototype. A housing block, which is custom-made but mass-produced and conceived via open source standards.