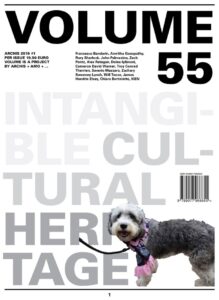 To think of heritage is to think of protecting and preserving our presence in the past. Heritage is a buzzword; it informs discourse about our identity, reminding us not just of who we were, but who we are. But another lesson to be learned from history is the necessity of change and dynamism. What we want to preserve and why we want to preserve it is not set in stone, although we may have thought so for a century. In Volume #55: Intangible Cultural Heritage we dig into the politics and practices of safeguarding the intangible; we look at the kick-back effects on tangible cultural heritage; and wonder if institutionalizing preservation of the intangible is in fact a threat to its own survival.

When it comes to collecting and protecting, perhaps what we value most are the distinctive traditions of our cultures. When UNESCO introduced the notion of Intangible Cultural Heritage in 2003, rituals, traditions, arts, crafts and social practices were for the first time considered worthy of preserving alongside ‘tangible’ cultural artefacts. Presented as a bottom-up initiative, it was an attempt to give cultural agency to oft-marginalized groups.

Yet the implementation of an ICH logic also plays a role in sustaining Western and universalistic views on culture that have social, geopolitical and ecological implications. When economic instances are considered in connection to heritage, ICH can be regarded as a way to capitalize on certain habits and traditions. In this issue we address questions of heritage and its intangible turn, and we look into the hegemonic role that modernity still plays in shaping heritage institutions, ideas and beliefs, and orienting cultural policies and practices for its preservation.

Atlas of the Intangible
Amritha Ganapathy with Francesco Degl’Innocenti

All Is Flux
Rory Sherlock