In 2000, the so-called ‘Millennium Development Goals’ were adopted by the UN, one of which was primary education for all. This was in the wake of the post-historical years that followed the fall of the Berlin Wall, in which a ‘Yes, we can!’ mentality was present (long before we had even heard of America’s first black president). Poverty, famine, malaria, and more – all problems that we can and should solve as global community; that was the spirit. In light of the program, this year’s results have been evaluated. Some goals prove to be tough, but education scores rather well. Not yet 100%, but if we can believe UN statistics, today 93% of all children between 6 and 12 receive primary school education.

Education is a double coded project. On the one hand it seems that as a consequence of the concept of universal human rights that every child has the right and is given the opportunity to be educated. (1) On the other hand there is the reality that education is essential for economic progress, both on an individual level and for society as a whole.

These, in part, explain why education is not only a right but compulsory in a large part of the world, and why societies would want to invest in education at all. It is a mix of protection, allowing the adult in the making to ‘unfold’, and of molding an adequately functional, responsible and capable citizen, and worker, equipped with the correct knowledge and ideas. In principle every child is supposed to endure this period and process called ‘school’, to absorb what society considers of importance, no matter their cultural, social or economic background. School creates a common ground. And despite all sorts of innovations in ways to teach, the military analogy of the drill of the classroom cannot escape us.

In the poorer parts of this world, realizing primary education for all is a major challenge, requiring major investments relative to their national budget. In richer countries, the emphasis has been on creating an ever growing (work)force of highly educated citizens.

The project of education is so successful that one wonders if it is reaching its limits. (2) If the majority has a bachelor or masters degree in their pocket (in Korea, Japan and Russia for instance, over 50% of the age group 25-34 has finished a form of tertiary education (3)), will the economy be able to absorb everyone now and in the future (not to mention the rapid advent of robots taking over more and more skilled jobs)?

In the historic development of society, from its agricultural form to that of information (by way of the industrial), schooling has been and continues to be instrumental. But now we have seemed to enter a more complex phase in which economic, medical and technological developments have shaped a somewhat different reality. We work longer, we’re supposed to be flexible, to reinvent ourselves mid-career. In short: we have to learn continuously; to be educated is not enough. But don’t we already have éducation permanente as model, as an integral part of professions such as medicine, law and (to a certain extent) architecture?. But this is because there is a responsibility to keep up to date with contemporary advances. The learning we see developing today has more to do with society’s demand for flexibility mentioned above, with how to perform as a professional, and with the merging of the technological realm with the private sphere.

And it doesn’t stop there. Learning is no longer exclusively human. (4) We see learning systems develop and ‘smart’ materials that are able to respond and adjust. On many levels reality has become dynamic, and these dynamic realities tend to interact as well.

It may not be an exaggeration to say that learning has become a condition, a condition that is hard to escape. Before, you would receive education and learn by yourself. It was one’s personal choice to learn. This is no longer the case. Learning is as inescapable as education was and is. Cultural scientist Joost de Bloois summarizes this as: “the demand for lifelong learning becomes the obligation for continuous adaptation, for continuous mobilization”. (5)

The focus of this issue of Volume is on what learning entails and on ways of learning, mostly in relation to architecture: conditions, methodologies, practices. In an issue to come, the attention will placed on the systemic world and the architecture behind ‘intelligence’. But that’s for later. For now let’s end with a quote from Franco Berardi in this issue: “We should rethink the process of education and of professional formation in view of the optimization of social good instead of the maximization of profit.”

PS: The pages of Volume’s predecessor Archis were perforated near the spine so they could be torn out. We once had the brutality to tear out a few pages of the magazine in advance for the Perversity issue. Not every reader equally appreciated this demonstration of the issue’s theme. In this issue we’ve gestured to pre-read the issue for you and highlighted certain phrases and notions that someone was attracted to, rather than to the essence of each contribution. Maybe this is less annoying. Hopefully it even stimulates to create personal narratives out of the material we included. A learning experience perhaps?

1. The start of compulsory education goes back to the 15th century in Western Europe when it was motivated by creating pious citizens by their ability to read the bible.
2. As contradictory as this may sound, but in some societies (like the Netherlands) the growing percentage of higher educated people goes hand in hand with a small, but also growing percentage of poor or illiteracy.
3. source: OECD
4. We’re aware that the animal world learns too, based on experience, but we can safely say that the learning humans do has a different quality.
5. In his ‘lunch-box lecture’ at Utrecht University on 25 March 2015 De Bloois sketched the political context of the university today. He was invited by protesting students whom demanded a more content-driven policy from the board, as opposed to an almost exclusive focus on management and finance. 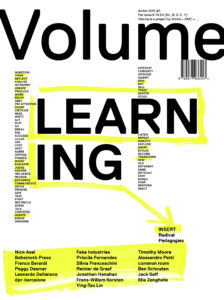 This article was published in Volume #45, ‘Learning’.

This piece appears in Volume 45: Learning.