Media Architecture and its Futures Implied 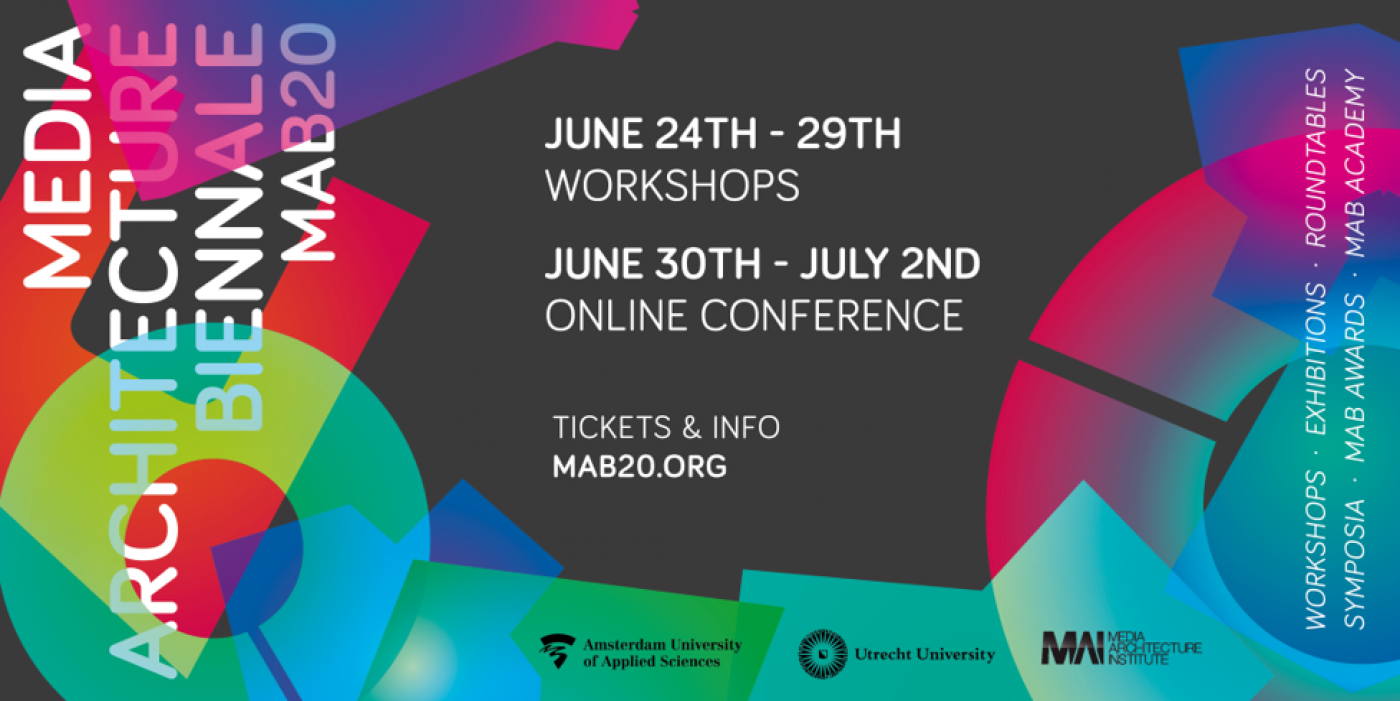 “Toronto swaps Google-backed, not-so-smart city plans for people-centered vision”, The Guardian headlined on March 12, 2021. For years, the tech giant had attempted to gain a foothold in smart city development, via its ‘urban intelligence’ spinoff Sidewalk Labs. Due to mounting criticism, the municipality of Toronto backed away from the futuristic tech-driven plans for Toronto’s Quayside. According to The Guardian, this move is a reaction to growing skepticism over technology’s role in urban development and reflects a renewed search for public values underpinning urban futures: “Canada’s largest city is moving towards a new vision of the future, in which affordability, sustainability and environmentally friendly design are prioritized over the trappings of new and often untested technologies.”1

This recent example shows how urban development – as well as the experience of already existing cities – is increasingly shaped by a range of digital media technologies, like mobile devices, urban screens, interactive installations, ‘sharing’ platforms, surveillance devices, data trackers, embedded sensors, and so on. While these are often marketed as neutral tools that simply make cities better, more efficient, or safer, they are increasingly questioned from a value-based perspective: Better for whom?; more efficient for whom and what?; to what goals and underlying logic exactly?; and safer, at the cost of exclusion of or bias against whom?

Urban technologies are, of course, not neutral but come with inbuilt assumptions, biases, and values that profoundly reshape urban life itself. At the Media Architecture Biennale 20 –  which is taking place for obvious reasons in 2021 – we wish to bring out a value-based discussion on urban technology and connect it to the design and implementation of media architecture in urban life. What future scenarios are implied in today’s urban technologies? We call not just for a critical evaluation of the scenarios that tech giants propose for places like Toronto’s Quayside, but also to constructively imagine its alternatives: how can interactive urban technologies be shaped to respond to the needs of citizens and their surroundings, and contribute to cities that are both socially and ecologically sustainable?

From a critical vantage point, by now, these new urban technologies have been criticized for spurring the dystopian logics of ‘three Cs’: Control by states and companies capturing and nudging our desires and behaviors; the increasing Commodification of urban life as a set of individualized infrastructural services catered to – usually the highest paying – customers; and the Capsularization, or splintering of social domains into fragmented silos. These three Cs are antithetical to public urban values that underpin city life, like civic agency, publicness, and communality.

Yet, in addition to the relentless techno-push and its threat to public values, there are also opportunities for new technologies to contribute to public values in the design of urban life. They could play a role in tackling profound global challenges like increasing inequality and exclusion to climate change and loss of biodiversity. Again, central to addressing these challenges is the articulation, discussion and rethinking of public values. For instance, cities are explicitly mentioned in the UN Sustainable Development Goals, with the aim of making them “inclusive, safe, resilient and sustainable.”2 And the 2021 Venice Architecture Biennale asks the value-driven urgent question, “how will we live together?”3

Thus, cities are caught up in a double whammy between technological and societal challenges. In response, various actors have already embraced the need to design urban technologies from a values-based perspective. Cities such as Amsterdam, Barcelona, and New York have called for citizen’s digital rights in the application of technologies to design.4 Designers, researchers, and policymakers have argued for the explicit inclusion of public values in the design of digital infrastructures.5 Explorations are put to the front to explore the actual adaptation of new technologies in the design of public space to activate public space in facilitating instead of enforcing action.6 Moreover, an increasing awareness has transpired regarding the necessity to include the well-being of the natural ecosystem at large in the design of media architecture.7

We believe that Media Architecture is one of the emerging spaces where this much-needed transdisciplinary experimentation and critical reflection can take place. The Media Architecture Biennale is a biannual event that brings together architects, designers, artists, researchers, engineers, educators, policymakers, and industry professionals to jointly explore how technology and digital media can bring out such livable and sustainable city environments with active public spaces. At MAB20 we want to open up this debate by bringing out alternative futures that media architectures can contribute to. How can media architecture trigger social sustainability and citizen’s digital rights, collective action, and new dynamics in public spaces? How can it help to balance between consumption and sustainability, and reconcile the broader interests of humans with those of non-humans and the broader natural ecologies in our cities? And how can it catalyze change towards sustainable mobility and consumption patterns, bringing out more circular economies?

With these questions we partly return to more critical as well as forward-looking perspectives that emerged with the rise of media architecture as a new field of – yes of what exactly? – something at the crossroads of art, engineering, urbanism, technology and design around the beginning of the century. At that time, the opening up of accurate GPS signals to citizens and commercial actors in combination with the rise of mobile communication technologies led to practices of what was then called locative media. These included artworks that tried to reinvigorate public spaces and make cities more sociable while at times invoking classical theories on urban culture. Around the same time, as cheaper, larger electronic and now possibly also interactive next-generation displays emerged they sparked a critical debate about the ever-presence of moving (digital) images in our public spaces; usually brought to us by advertisers. As an example, in 2005, about 200 people assembled (physically!) on the top floor of an 11-story postindustrial relic in Amsterdam – now demolished to make room for amongst others the headquarters of Booking.com – to attend the first Urban Screens Conference, organized by the Institute of Network Cultures. There, critical questions were being raised about urban screens of various scales dominating urban public spaces in global cities. One of the primary concerns was to instigate a critical investigation of fundamental transformations affecting urban public space.8 Similar questions at that time were posed at conferences such as Media Cities, The Hybrid City, The Mobile City and the long-running bi-annual Digital Cities workshop series.

Over the years, Media Architecture has become an emerging, highly interdisciplinary field of art and design that is concerned with the application of media and technologies in cities. It brings mediated experiences into the urban public realm, bridges the use of digital platforms, technologies, and physical urban spaces, and connects the flows of data with the circulation of people, goods, and other resources. And whereas Media Architecture originally was mostly concerned with the integration of displays and interactive installations into architectural structures, such as media facades and urban screens, in recent years the discipline has grown as new technologies such as digital platforms and smart city technologies have increasingly made their way into the experience, management, and design of cities.

Media Architecture approaches all the intersections of physical and digital spaces from an integrated design perspective. It searches for new forms of understanding at the crossroads between traditional architecture, technology, media art, design, and the humanities and social sciences. It integrates an engineering perspective aimed at the development and implementation of new technologies with a design approach that puts the user or the citizen at the center of the process. With the increasing integration of physical and digital spaces and experiences, media architecture has also seen an even larger interest from commercial companies in advertising, tech development, and digital platforms. This partly resulted in a design approach focusing on usability and customer satisfaction, aiming at gamification and branding, with a devotion to the spectacular and the dramatic.

Whereas this has brought interesting insights into the ‘design grammar’ of media architecture, as well as convenient services for consumers and bedazzling experiences at the levels of buildings and skylines, we now wish to reinvigorate the value-based thread in the research and design of Media Architecture. With our latest edition of the MAB, we argue that now more than ever media architecture must move beyond the mere spectacle, and the design of individualized services comforting human customers. We call for media architectures that strengthen citizen’s digital rights in democratic societies. We call for urban interaction design that dares to take on a more-than-human approach: aiming at the well-being of the ecosystem as a whole. We need a media architecture that explicitly addresses the underlying values and implied futures of new technologies, bringing out the implications and opportunities for locally situated communities of citizens as well as their natural ecologies.

Our collaboration with Volume is part of a longer trajectory exploring such a perspective. It started with a joint Winter School in early 2020 called Promises Promises, in which we invited participants to contribute to a tech-reality check around the broken and fulfilled promises of urban technologies – from the smart toilet up to the platform urbanism of the smart city. And it has now resulted in this collection of essays and interviews that outline the debate we wish to further extend at our online conference taking place from June 24 to July 2nd. We hope to see you all there!