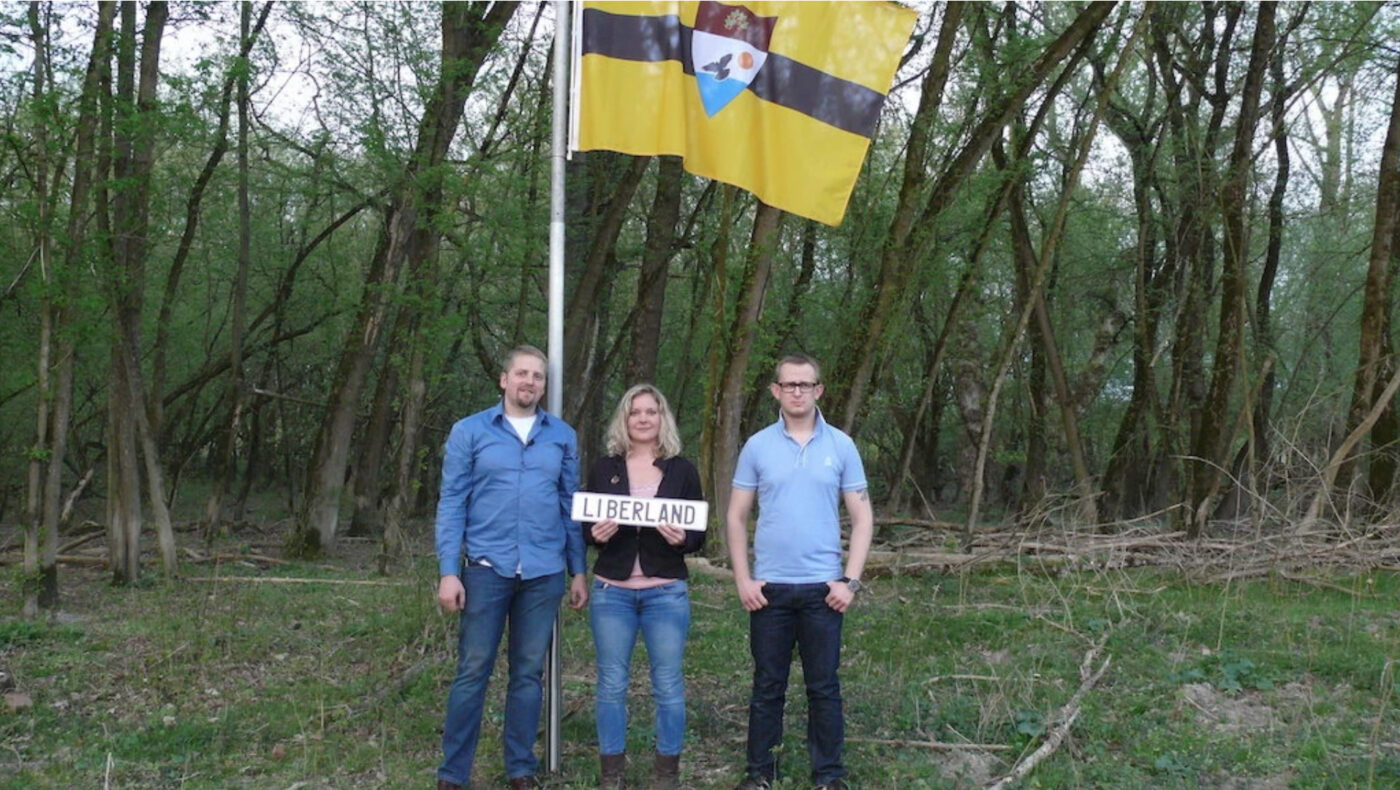 The story of Liberland, an anarcho-capitalist utopia founded on the Danube in 2015, needs to be told in the inverse direction than that of traditional national founding stories. Rather than a land that gets retroactively invested with a founding myth, it is a founding myth actively searching for a land – and using any means to get there. I take stock of its brief history and speak to the President and the Architect of Liberland about their aspirations for touching the earth.

On the island of Gornja Siga along the Danube between Serbia and Croatia lies an utopia – a land one man has described not merely as a tax haven, but rather “a tax heaven.” This man is Vit Jedlička, the President of Liberland, the self-declared libertarian nation that lays claim to the 7 km² territory. Jedlička, a Czech libertarian politician presumably fed up with paying taxes to a system he could not influence, came across the territory one day on a list of no-man’s lands on Wikipedia. On April 13, 2015 – the birthday of Thomas Jefferson – he landed on the territory and planted a flag. Since then, what was decried by many observers as a hoax has not only survived, but indeed thrived. Fuelled by neo-metabolist architectural visions of off-grid libertarian living and tireless diplomatic activity, Liberland has steady monetary backing, is building an blockchain-run government apparatus online, and is launching an incipient colony on the Danube. The irony, however, is that neither Jedlička nor any other Liberlander is allowed on the territory that they claim, subject to arrest by the Croatian police that guards Gornja Siga.

Much has already been written in the press about Liberland, particularly in its early days, when journalists from seemingly every major paper took turns accompanying Jedlička in futile attempts to access the territory. After planting the Liberland flag on that fateful day in 2015, he was immediately voted President by the other two citizens, that is, his girlfriend and friend. Only two days later, in a post on Facebook, the Croatian Foreign Ministry dismissed Liberland as “virtual joke” not worth an official statement. The President and his coterie were unfazed, and set to work drafting up a constitution and forming a government. There was an immediate flood of citizenship applications – 400,000 – the majority of which were asylum seekers from the Middle East; only about 30 citizens were finally accepted in 2015.

Liberland’s earthly domain is a constellation of locations and events that gravitate around the unoccupied Gornja Siga. These props, in various stages of construction, share a fundamental quality of ephemerality and mobility, as if recalling their origins as a dream spawned on the internet. To list some of these manifestations briefly: the network of Liberland embassies, which are usually the private residences of Liberlanders, or the embassy in Hargeisa, Somaliland (the only political entity that formally recognizes Liberland – itself an unrecognized entity); the innumerable events and conferences that official dignitaries host or attend such as Davos, Blockchain conferences, and so on; and finally, numerous Liberland marketing curiosities such as Liberland Beer, Miss Liberland, or the Liberland football club that participates in the Unrecognised Countries tournament.

When I reach Jedlička by phone, he first apologises for being late. There were “some tough negotiations going on” he tells me; “I am next to Liberland and we just bought a restaurant.” Jedlička speaks in a Czech lilt with a fluidity that suggests an easy confidence in the undertaking. The restaurant in question (as I later find on Facebook) is Plava Ruza, a beach club of sorts on the Serbian side of the Danube, which is to serve as a land base for a new floating settlement, allowing it to function permanently. It will contain a restaurant, coworking spaces, a small hotel, perhaps a casino, and potentially a helicopter landing pad. Jedlička informs me that entrepreneurs from abroad will move in shortly to settle and operate their businesses from the incipient floating city.

Even though I can’t see him over the phone, the President seems to be positively beaming with good news. He goes on to tell me about the March 18 launch of Liberland’s online decentralized autonomous government, which will also run a prototype conflict dispute system. The platform will allow businesses to register in Liberland – the more they contribute in voluntary taxes to the country that doesn’t yet exist, the more say they have in its ventures, and the greater their social standing in the resolution of disputes. Real-world business address and banking features will be granted via a Seychelles entity.

But it can’t aspire to being a real country if there are no plans for building on it, right? In 2015, an international competition for the design of a Liberland master plan was held, its jury presided over by none other than anarcho-capitalist darling Patrik Schumacher. “Doesn’t having a master plan go against libertarian principles?” I ask. “Live and let live doesn’t mean that there is no organization,” answers the President.

Studio Bianchi Architettura, a Rome-based practice, was amongst the winners. I manage to speak with Sergio Bianchi himself about the thinking behind his team’s proposal. Inspired by “metabolism and science fiction,” he aimed to shift the environment of Liberland upwards, into the air. Sounding slightly star-struck, he muses over his first encounter with the President. It was “an incredible feeling… some kind of adventure.” He recounts receiving a call from Jedlička and being summoned to Croatia, then unexpectedly being redirected to Serbia – Jedlička not being allowed on Croatian territory – to meet the President late at night. Bianchi was then invited to further visualize what he had in mind for the masterplan of Liberland.

We talk about the role of the virtual domain in the development of the next phase. Bianchi recounts how Jedlička’s interest in using online platforms spawned Liberland Seed, a smaller scale project based on the aerial urbanism of the competition design. With a smaller footprint, emerging from the water, the Seed could potentially be implemented without the need for permission from the local authorities. The President tells me that virtual reality will be used to allow would-be inhabitants to participate in its conception. “It is incredible how strong Vit is,” Bianchi states at one point. “He is a dreamer but practical at the same time.”

I ask Bianchi if the blockchain/internet/technological aspect of Liberland has somehow impacted his design or perhaps instigated new typological approaches. He ponders and chooses his words thoughtfully, hesitating often. “Architecture is still about the place for people to live in. It is still very physical, but you still try to find some similarities [with the net]. The place of humans is the air. The similarity [of Liberland Seed] with the net is in the quest for freedom.”

Speaking of freedom, Bianchi was also asked to assist on the design of Bitcoin Freedom, the converted boat at the heart of the mobile floating colony to be moored in the beachfront harbor of Plava Ruza. The settlement is a more realizable step than the grander architectural vision of Liberland Seed, with some boats already having been purchased. It is meant to migrate between a north and south area on the Danube as the seasonal water levels change, and to consume zero external energy – rendering it independent of the grid – as well as implement hydroponic cultivation to provide food for the settlement dwellers. By achieving a permanent settlement, Liberlanders aim to clinch, depending on your definition, all four conditions of statehood set forth by the Montevideo Convention: The state as a person of international law should possess the following qualifications: (a) a permanent population; (b) a defined territory; (c) government; and (d) capacity to enter into relations with the other states.

Getting momentarily carried away by all this, I venture to the President that perhaps it isn’t even necessary to settle on Gornja Siga itself. What about developing a model based entirely on floating settlements spread around the world? Perhaps the blockchain jurisdiction could sustain this distributed country? Or what about a model based on the Sovereign Order of the Knights of St John, that inhabits a handful of buildings in Rome and Malta, legally extraterritorial? Jedlička responds by stressing that Liberland is special because it’s a piece of land, and that to be able to register “you need the land.” The President concedes, however, that they are currently “focused on building up a strong national movement and the territory will come as a secondary product of our efforts.”

The internet is the theater where the pantomime of this national movement is played out; indeed, if Liberland is a dream of a place that cannot be inhabited, online Liberland is very much its true territory. A quick perusal of Liberlandpress.com reveals a chipper list of headlines that tacitly suggest that the country already exists. “Liberland enjoys growing support in the Middle East;” “Liberland: A Summer full of exciting events;” “A mutually beneficial relationship with Caribbeans nations;” “First international chess match Liberland vs Ivory Coast,” When Jean-Claude Juncker made the official statement that the status of Gornja Siga “requires further clarification,” supporters were jubilant. “EU opens the way towards recognition of Liberland!” heralded Liberland Press. Only a few days after our phone call, however, the President posts on Facebook that the deal for purchasing the beach club on the Danube has in fact not materialized, for want of permission from the Serbian Central Bank.

Around the void of the territory that Liberlanders are denied access to, a cloud of elements, whether embassies, floating settlements, press releases, or tours, all mimic the devices of statehood, like props on a stage. When seen from the right angle, the elements coalesce into an image of a new country being born. Shift your position slightly and you see a banal hoax. But if enough people buy into it, does this even matter? The Liberland passport has by now been used to enter Somaliland; two e-commerce platforms now allow Liberland to be used as a country of registration for new businesses. Are Liberland boats and businesses registered as belonging to Liberland, I ask? Jedlička assures me that a couple of boats ‘will’ be registered in Liberland. “We are not trying to convince people, we are just doing our business.” And adds with a certain swagger, “that’s how countries are built.” I wonder to myself, what have I been doing with my life all this time?

Hans Larsson is an architect of Swedish-Argentine background, working at OMA in Rotterdam. He is co-founder of Post—Office, a platform for exploring alternative architectural methodologies, and participates independently in studios and workshops at TU Delft.