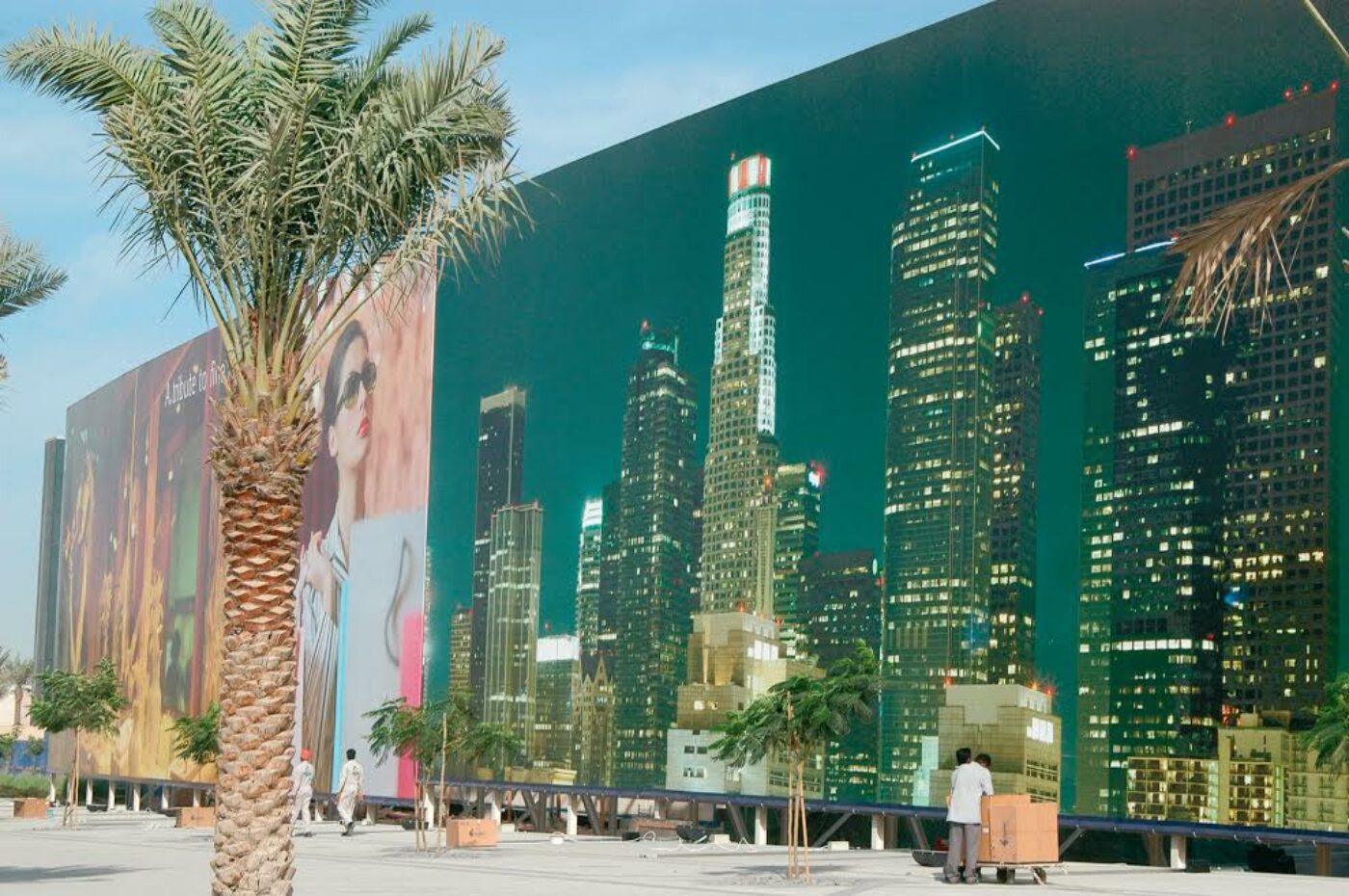 Cities arise because of people’s basic need to live and work near one another. The city offers freedom, anonymity, trade, economy of scale, an immediately accessible consumers’ market, work potential – a swarming brew of ideas and innovation that fulfill man’s social, psychological, and economic needs. The city is the motor of progress. 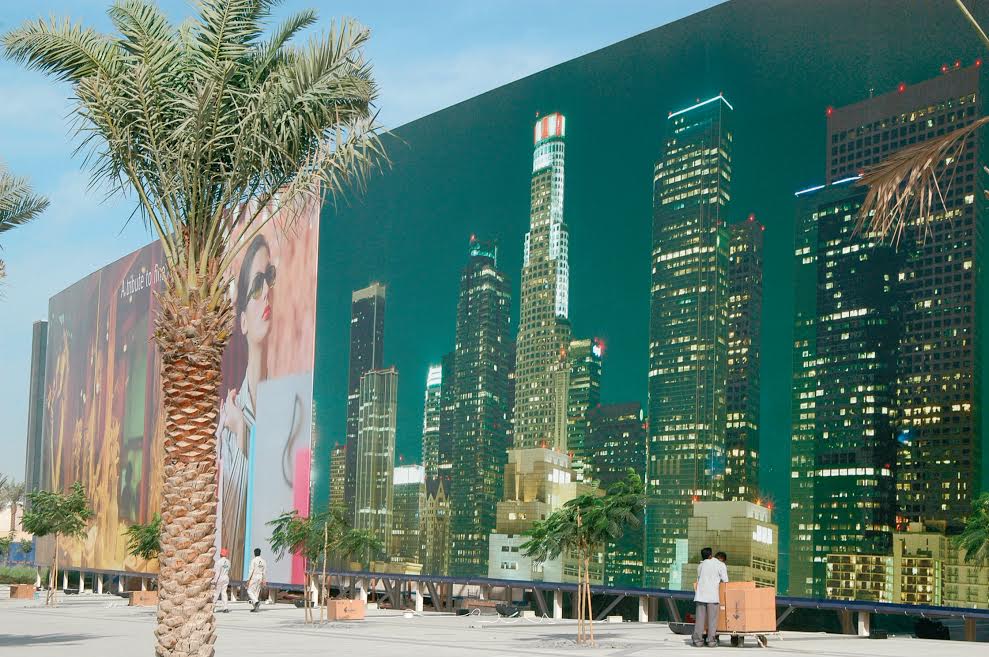 So it was and so it seems still to be. The growth of the city – the enormous and never-ending expansion of urbanization, continues to be understood in terms of modernity: people want better lives, and they seek their luck in the city. For true wealth, you also still need to be in the city: in penthouses, high above the dirty streets, but still close to the director’s offices, the conference rooms, the lounge bars, the skyboxes, the restaurants, and all the other locations imperative to the art of networking.  Hence the city can be understood by its incredible density of people, ideas, and interactions.

And through its architecture. We have come to take for granted that those locations with large congregations of architecture must be cities. This assumption is the  slowly ripened result of a long historical development of more, higher, freer, better,  richer. A solidification of a gradual historical process. And in this process of consolidation, we city dwellers are left to experience the daily hum of car engines or street musicians; the smells of the hot dog stands and the asphalt; the harsh wind blowing through the boulevards, or whirling around the high rises.

Not quite. Now a city exists that is not the end product of a slow process of development, but, at best, stands at the beginning of a new and swift one. A city that is not  a haphazard creation formed from a coalescence of history, but a simple conception  sprung straight from the drafting table. Not the precipitation of the ambitions of innumerable protagonists, but the execution of one individual or oligarchic decision. The  contours of that city are not found in a historic will that took centuries to manifest  itself, but in the graphic realization of a projected image from the here and now. Forget  the logo as a symbol of your corporate identity. Gone is the era of the iconic building  that has to catch your attention. Now you can just build an entire skyline as a logo.  After the Bilbao effect, we now have the Dubai effect. In such a city (even though  she lies ringed by scorching desert) all smells and sounds are banned, even the searing temperature is made obsolete. They are replaced with a commercially acceptable  sound-scape, aromatic scenario’s and a soft, sultry breeze. This is the architecture and  urbanism of the most evolved form of brand awareness. It looks like a city, but feels like animation. The inhabitants and visitors are not the city’s cause, but its legitimacy and profit margin.

That is, if you have the resources necessary for this transformation. So welcome to Dubai. Or Kuwait City, Doha, Manama and the other instant cities in the oil states. One-dimensionally they are small dots on the map that have suddenly become rapidly growing ink blots. Two dimensional silhouettes are literally carved out of the sea, desert, and air. Three-dimensionally, completely novel forms of human society have sprung into being. A four-dimensional step is made in the leap from historical origin to a-historic ‘implementation.’ Where once, from the Città Ideale to the Ville Radieuse, the complete vision of a city was to remain a hallucination, now a full city can be made in a matter of years. You can’t exactly call this the realization of a dream – it happens too quickly for that. Even though some allude to this as the most expansive urban event that man has ever known, this might just be the modern-day form of marketing.

Marketing? Or is there more going on? In general, the Gulf States are described in terms of their extravagance – sometimes also of their decadence. The speed with which complete islands are designed in the sea, the exorbitant cost of construction, the mind-boggling creation of so many square meters, the luxury of the interiors, the scale of the biggest airport, the highest tower, the most spectacular ski-dome, all expressions of transgressive drive. Writers from across the publishing spectrum, penning reflective essays to tourist blurbs in inflight magazines, only use superlatives to describe this new pressure cooker of modernity. Choosing the safe side of the historical battlefield, they limit themselves to anthropologic eulogies of yet another phenomenal step forward for mankind.

There is also a rising genre that describes this new step forward in terms of the economic contradiction in capital and social price that these cities require. Also the social critic has found fertile grounds to express his or her indignation. We now know about the unimaginable exploitation of Asian men, imported labor, who for a few dollars a day toil away to create these dream constructions; and about the Asian  women – victims of human trafficking and endemic heartlessness, who work as imported sex workers and domestic slaves.

A similar line of reasoning addresses the noteworthy relationship between these hyper-modern societies and their roots in tribal and Islamic cultures. Diverse authors ask themselves how it is possible that these regions of decadence have escaped the large-scale terrorist attacks that the West has come to fear. Has Dubai not earned, by the Wahabitic yardstick, more of God’s wrath than any other city?

Then of course, there is the ecological perspective. This focuses on the threat to nature that is the natural consequence of unbridled construction. The constantly resurfacing example of this is the possible deformation of coast lines along the Persian Gulf as a result of the reckless construction of several artificial islands along the coast.

This is dismaying news even before one considers these cities’ flagrant waste – not only of natural resources, but of a seemingly limitless stream of money. Dubai, and the Do Buys around it, from this perspective, may be the last big kick that mankind can treat itself to. An enormous potlatch, based on the riches, accumulated over millions of years, of crude oil.

What is striking in these interpretations, is that they are attempts to describe the developments of the gulf region within familiar and known theoretical frameworks. But is it possible that this is an emerging world for which we as yet have no concepts? Or maybe, a world that has gone beyond theoretical constructs? Could this be a world that is determined, regardless of consequence, to be beyond sense and reason? Should not every attempt at understanding fail when confronted with the naked truth? Is the rising world on the west side of the Gulf not better understood as an unconscious  experiment in Social Darwinism, disguised as paradise?

The experiment has multiple dimensions. First, there is an unprecedented degree  of wastage. Moderation is nowhere to be found. The investments that are necessary  for this urban conurbation, amusement parks, airports, and offshore engineering are  mainly financed by oil profits. Anyone trying to imagine what kind of wealth is necessary for this will find no historical precedents to aid them. The astronomical profits earned from the high oil prices will only continue to rise in response to increasing demand. So much capital is now available that it has begun to exceed human imagination. That is, if it comes to imagining what can be done with it. This flood of resources (next to capital is there endless space and building material) has killed any lingering acknowledgement of scarcity. Prudence and caution have disappeared. Money, that will never  have the same profit margin as the product by which it was originally earned, must be  spent. You can ask yourself if it is even possible to speak of ‘investments’.

The experiment has moral implications when one examines the individuals making these projects possible. The gulf region is, without precedent, home to the widest disparities between rich and poor that exist in the world. Even those who would  believe that these laborers earn an adequate salary, and even if this salary was actually  paid to these laborers, can see that in comparison of these salaries to the existing  sums of money one can only speak of a modern form of slavery. A flood of capital also  implies an endless source of labor. It is questionable, however, if this situation can be judged by the parameters of social theory. Indeed, despite the abominable circumstances, isn’t it all based on free will after all? Open coercion, on a large scale, is not  verifiable. Perhaps there should be an exploration what free will actually entails  in these regions.

A third dimension of the experiment is the degree of coincidence. The prosperity of many of the citizens of Dubai, Kuwait, or Qatar has little to do with their intrinsic value, their personal productivity or talent. The realization of a world valued at the level of a seven star hotel, is not a well-earned reward for hard labor, but has everything to do with the coincidental fact that oil existed underground. This is particularly ironic for a nomadic society, that lived for centuries in temporary settlements, and now  have every interest in creating cities close to oil wells, with the demarcation of territories and the forging of alliances with the global powers that can assure that this wealth will remain in the same hands.

Perhaps it is a deep understanding of the coincidence of wealth that prompted the happenstance of forms in which this world has been molded. Those who absorb the images on the following pages will see how a world can be created in which forms do not rest on a canon of legitimized styles, but upon the capricious tendencies of the market and whims of the client. This results in a city landscape that can formally be described as arbitrary. The very search for excess, the need to make an impression, has led to mass production of ‘genius’.

But the waste, the inequality, and the coincidence become even more penetrating when we understand how this artificial world is the eye in a hurricane of natural disaster and warfare.

In an oasis surrounded by the battles for Kashmir, the earthquake rubble in Pakistan, the confrontation politics of Iran, the civil war in Iraq, the Israeli-Palestinian conflict, the genocide and famines of East Africa, and the chilling destruction of the tsunami, Muslims, Jews, Christians, Buddhists, and especially many agnostics come  together to celebrate the epitome of human wealth. If one thing is obvious, it is that  this celebration is oblivious to the encroaching misfortune and disaster.

Perhaps this is the most experimental aspect of this whole development: that desperate optimism has created its own playground, virtually blind to the world around it. Decadence as total denial of truth. But also decadence as the only hope in creating something so terribly magic, that it might survive the age of oil. 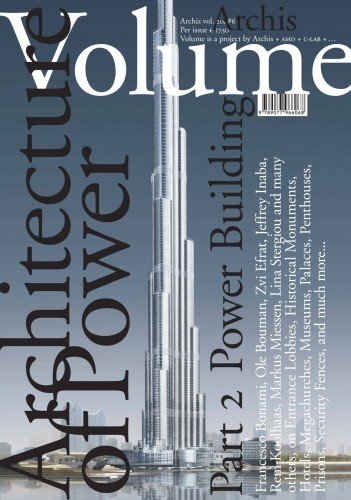 This article is part of Volume #6, ‘Architecture of Power, part II: Power Building’.