BLUE: The Architecture of UN Peacekeeping 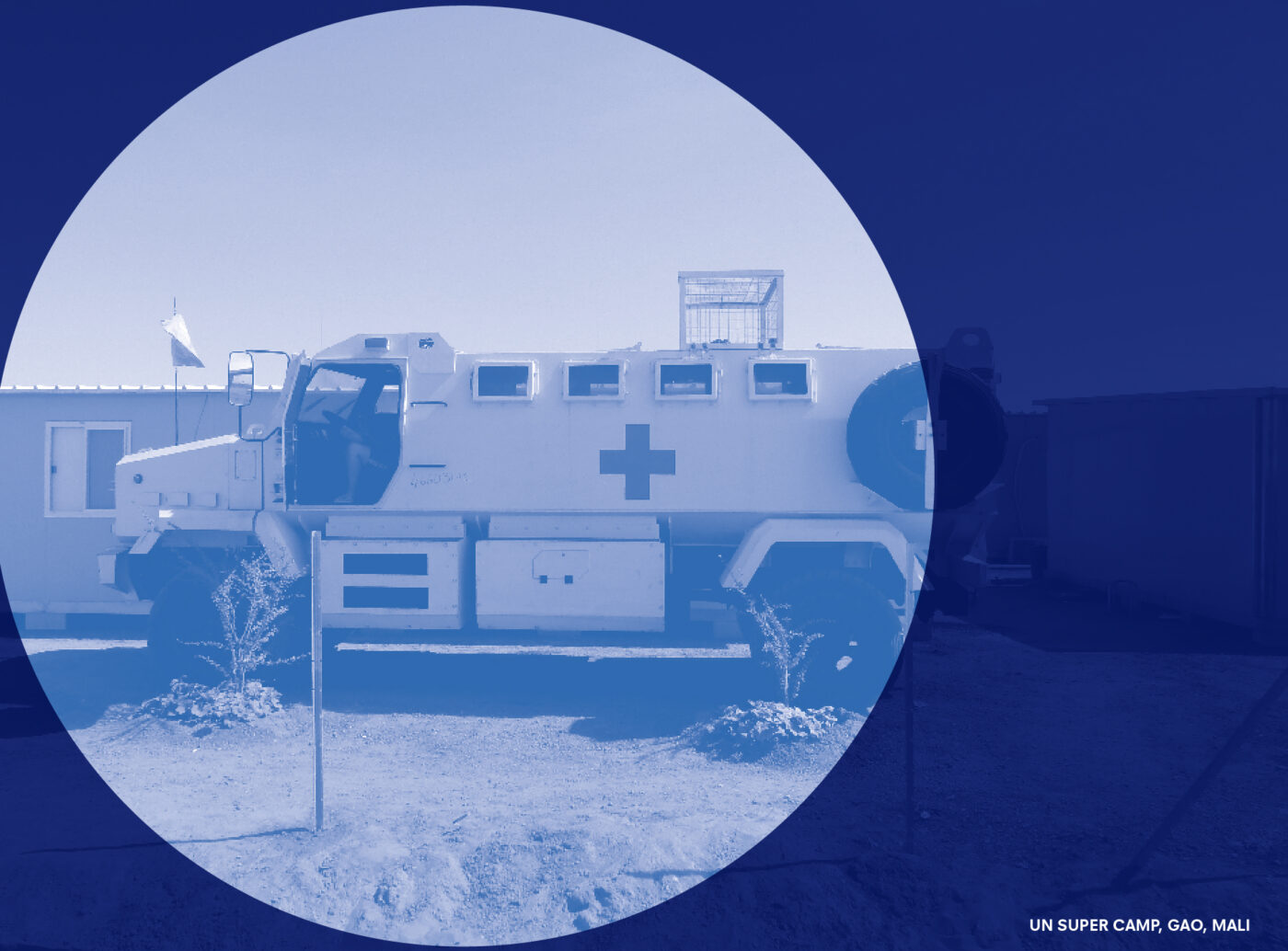 Volume #48: The Research Turn contains the exhibition catalogue for BLUE: The Architecture of UN Peacekeeping, the Dutch entry at the 15th International Architecture Exhibition, la Biennale di Venezia, by Malkit Shoshan. BLUE focuses on the most prominent footprint of the United Nations’ peacekeeping operations: the compound.

After the collapse of the Soviet Union and increasingly since 9/11 and the ‘War on Terror’, warfare has moved into the city. While the wars of the 20th century were largely between nations, fighting over territorial sovereignty and along disputed borders, the wars of the 21st century have been internal and borderless. Today’s wars are being fought between large multinational coalitions of security regimes and insurgent networks. It’s not just war that has moved to the city though: the entire security apparatus has moved with them too, including its peacekeepers and their entire infrastructure. Today, United Nations (UN) peacekeeping operations are taking place in hundreds of cities around the world and at a large scale.

BLUE aims to turn the spotlight on contemporary UN peacekeeping missions as an urban phenomenon.  For the 15th International Architecture Exhibition, the Netherlands will explore architecture’s ability to improve the quality of the built environment – and with it people’s lives – by critically exploring its own role in UN missions and its frontiers.

BLUE: The Legacy of UN Peacekeeping Missions began as a research project and a dialogue between the Dutch Ministries of Defense and Foreign Affairs, architects and other cultural actors. The Dutch ‘3D’ approach to missions – integrating Defense, Diplomacy  and Development – is internationally regarded as innovative and progressive. By adding a fourth ‘D’ – Design – UN camps can be transformed from closed fortresses into catalysts for local development.

BLUE takes the Dutch Camp for the UN in Gao, Mali – Camp Castor – as its case study. Here the ‘blue people’, the Tuareg, and the ‘blue helmets’ of the UN meet; as do the desert and the Dutch approach, the nomads and settlement…  BLUE – which as a color also represents boundlessness – exists at the intersection of architecture, human rights and activism. It emerges in times of conflict as the endless space of imagination and pragmatism that can produce alternative solutions. BLUE has the potential to improve life for millions of people.

BLUE is made up of a series of narratives based on conversations with military engineers, architects, anthropologists, economists, activists, policy-makers, journalists and novelists. Incorporating cultural and spatial explorations, BLUE positions architecture in three distinct ways: as research, identifying and making visible spatial challenges and opportunities; as a practice, improving people’s living environment; and as a critical cultural space, reflecting upon phenomenal transitions in society. With this approach, conflict can become a chance for architecture to reinvent both the built environment and itself.

There are about 170 UN peacekeeping bases located in rapidly growing cities in the Sahel. These compounds are there to accommodate UN personnel while they conduct missions. In order to not put additional pressure on scarce local resources, bases mostly provide their own water and electricity. They have basic infrastructure – a hospital, power plant, and waste treatment plant. The camps are rapidly built and are designed to operate as self-sufficient entities that have little need for interaction with their urban environments.

On the other side of their fences are the cities, which are mostly expected to multiply in size over the next twenty years. Many of these cities already struggle to provide residents with regular access to water and electricity. They have shortages of both food and housing. If armed conflicts and militarization continue to escalate in the region, resources will become even more scarce.

Design for Legacy aims to introduce architectural and design thinking into the planning and construction of UN peacekeeping bases. Currently engineered like machines with no civic or communal values, they could provide essential support local populations and leave behind a sustainable physical legacy that is beneficial to the development and stability of the local community once the mission is completed.

The UN itself talks about ‘Guidelines for the Integrated Approach’ – bringing together Defense, Diplomacy, and Development. What if we added a fourth ‘D’, for Design?

Architectural and urban design knowledge can bring together scales, disciplines, and stakeholders. By incorporating participatory practices, these could become important instruments for mission planning. It could help to generate alternative visions for the future of these areas and work towards a positive legacy.

In the end, the mission will be gone, but infrastructure, resources, and knowledge will remain behind with the local populations.

Below is a four-stage process that describes how a UN base can gradually open up and share resources and knowledge with local populations. The four stages are linked to security regimes. These exchanges aim to empower the local population so that they can reconstruct and strengthen their own environment.

A first interaction with the community during the construction phase of the base is important. In an uncertain security environment, relationships should be established at the start that facilitate knowledge exchange and carefully managed economic exchange, with some local sourcing. In this first exchange, UN forces should address local urgencies wherever and whenever possible.

The periphery of the base can act as an interface with the local environment if the right precautions are taken, even with relatively high threat levels. Here the civilian population can receive medical treatment and have access to water, food and electricity.

Inside the base, infrastructure such as water, electricity and sewage could be developed with a legacy in mind. The physical organization of the base could be designed so that it takes into account the future growth of the city and allow for an easy transformation of the base from being used by the UN to local inhabitants – from both an organizational and a technical point of view.

Whenever possible, a shared space between the city and the base should be developed. This could be where UN peacekeepers and the local community develop and execute projects together. Here resources, education, trade, employment and cultural facilities could be designed to bring the locals and the UN together.

This area should be visually attractive, taking into consideration local culture. It could contribute to the establishment of a safe and secure environment for the local population as well as for the UN troops. The shared space should be developed gradually and in collaboration with the local community. It could be considered a hub and as a catalyst for local development.

By supplying resources and making knowledge available, local inhabitants can become empowered to develop their environment themselves. Schools and workshops could experiment with the production of resources by combining do-it-yourself solutions with both smaller and larger scale infrastructural production and maintenance. Spatial practices developed in the shared space could be replicated both in the city and on base.

At the end of the mission, the base should be handed over to the local population, and become an integral part of the city. Since bases have been developed with the idea of legacy in mind and have incorporated local techniques, the structures should leave behind valuable resources for the city.