At the Middle Dyke

Atelier aan de Middendijk & Guido Marsille invite you to the opening of an exhibition, part of the Noorderlicht photo festival. 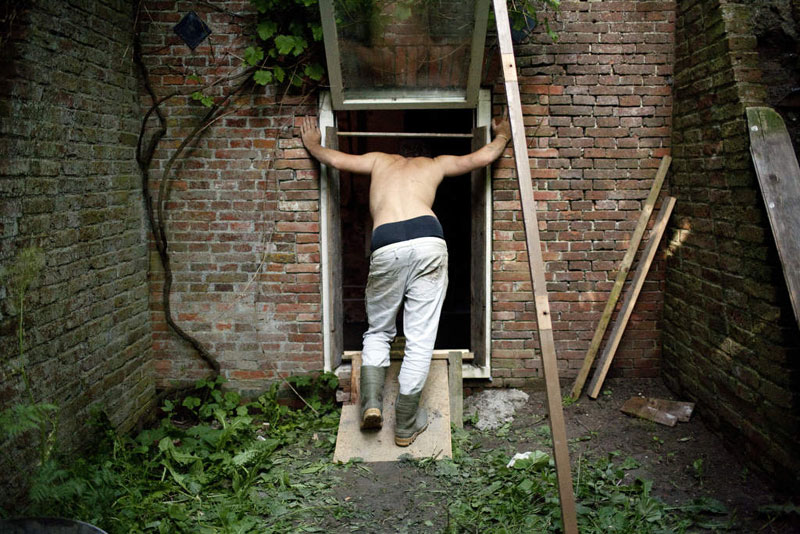 Our starting-point is the doorway of a small farm at Middle Dyke in the North Polder of Groningen, in the northernmost part of the Netherlands. We bought the house from Jos Nienhuis, a biologist who had disconnected water, gas and telephone facilities when he himself purchased the premises in 1980. He embarked on his own experiment of ‘energy-saving living’ at Middendijk. The polder as productive land altered drastically after the war. As of today, the villages of Groningen are largely populated by commuters. Commuters cycle the long-distance route that passes in front of our house and enjoy the views of the agricultural land. This attractive route has acquired a different horizon in the last five years. When you cycle eastwards, you will encounter on your left what has recently become the Netherlands’ biggest UNESCO world heritage site, the Wadden Sea, and up ahead the Eemshaven wind turbines.

Thanks to the relatively recent decision to build two power plants – NUON and RWE – and the arrival of the Google data center and Vopak strategic oil storage facilities, the port’s future suddenly looks bright. The new power plants are obliged to make so-called environmental compensations in the Wadden Sea. Consequently, fishing grounds have been bought up, benefiting UNESCO nature, and the fishing industry is disappearing.

In our view, Nienhuis’s self-sufficiency in his energy-saving house takes on relevant significance in this context. At the Middle Dyke we give continue his experiment via photography, as a result of the re-design of the interior of the house and by gardening. Designer Guido Marsille is the first artist-in-residence at the Middle Dyke. The exhibition shows an installation with the photography of Dirk-Jan Visser and the spatial design of Marsille.