50U: CONTRIBUTION BY REM KOOLHAAS, THE ANALYST 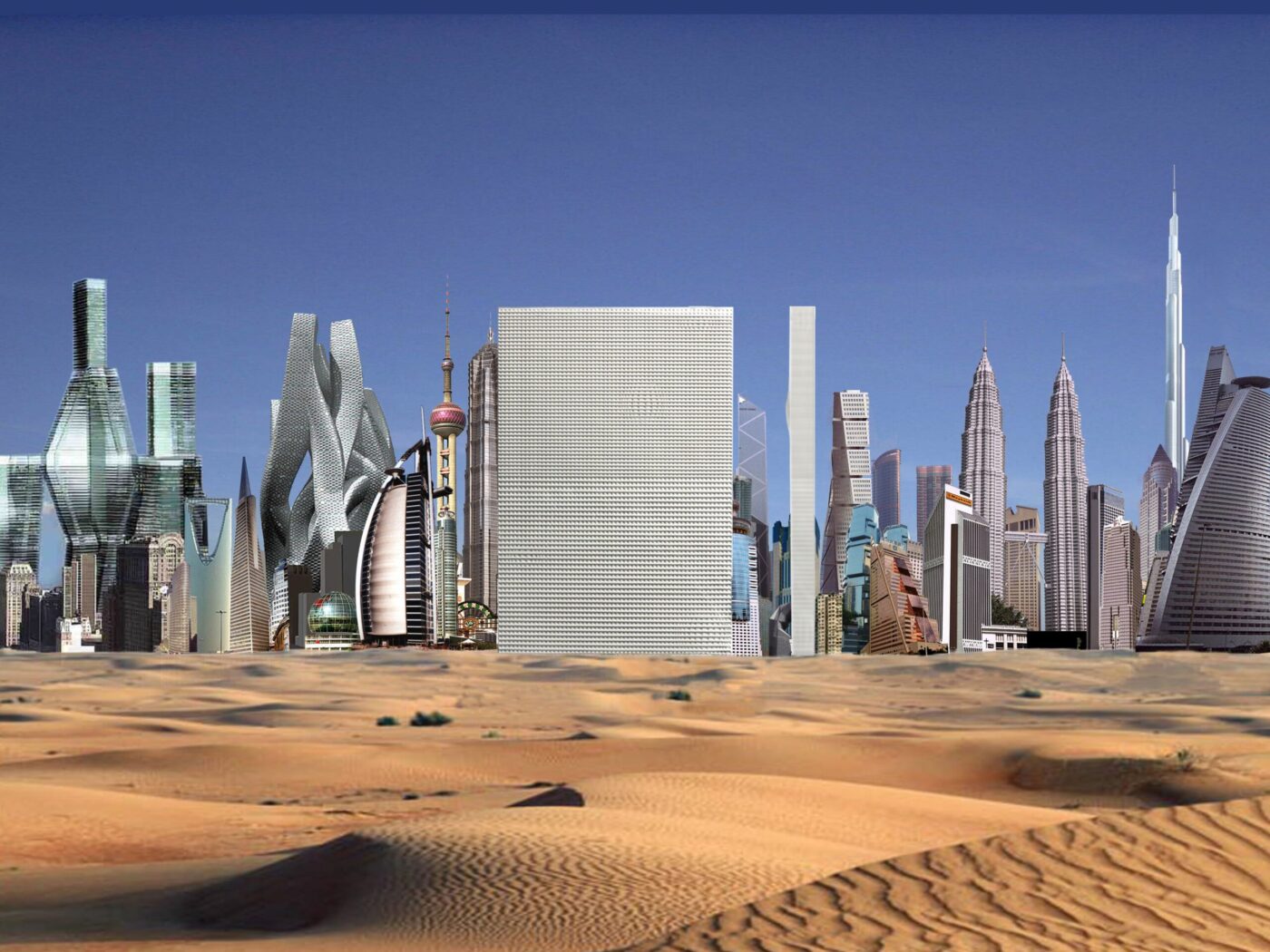 Architect Rem Koolhaas was one of the first to question the high-rise icons as a phenomenon. He was also early in pointing at the Gulf and the Emirates as an area with the potential of re-inventing urbanization. In this lecture for the Sharjah Biennial 9 (2009) he explains his position. Looking at where the UAE stands today, it is interesting to mark this moment of expectation.

I came here first in 2004. We were asked to do a major building on the site which is marked by the flag. Then, two years ago it was the exact moment… I became increasingly nervous about the mission of architecture and the uses of architecture. And I really became almost desperate… that the incredible pressure of the market economy was forcing architecture itself into increasingly extravagant conditions. Seemingly, Dubai seemed to be the epicenter of that extravagance. So, I came with deeply ambivalent feelings. It seemed as if the idea of the city and the metropolis itself had been almost turned into a caricature, not a coherent entity but maybe a patchwork of theme parks. And those themes would become the bogus and increasingly bizarre characters that were perhaps partly mythical and partly real.My first building attempt in Dubai was to use Dubai, to use its expectations of absurdity and to run against them, to propose a very simple, singular, pure building – really a new beginning. The Renaissance building is 200 meters wide and 300 meters tall. It was seemingly absurd that the age of icon, or the age of increasingly bizarre architecture would be over. My theory or expectation was that the building would work particularly best in the context of Dubai, because you could count on the context of contrast of the other differences to achieve its pristine beauty, and at the same time eccentricity, perhaps, and therefore bleat its importance loud and clear – a new declaration at a strange moment in architecture. So, this is four years ago. Two years ago we published a book, Al Manakh, on Dubai and the whole Gulf region, because, as in this lecture, Dubai is a metaphor for the Gulf region as a whole. We simply decided to look at and engage with the Arab world; to talk to the Arab world and comprehend some of the more superficial, or some of the more common Western analyses of Dubai. There is no person more eloquent about the evil of Dubai than Mark Davis. His book Evil Paradises, which is partially about Dubai, was published more or less simultaneously with Al Manakh. In his essay he describes Dubai, as you probably know, like a nightmare, where “Walt Disney meets Albert Speer on the shores of Araby.” It is this kind of superficial reading of the possibility of Dubai that we have increasingly tried to contradict. In that sense, we are actually in quite a strange position of somebody who is, of course, not an Arab, who has no major Arab allegiances, and who is nevertheless arguing against some of what I see as dangerously superficial interpretations of a phenomenon immediately ambiguous and multi-faceted, both in the good sense and the bad sense, of Dubai. My involvement in the Gulf in a certain way was a series of failures, or a series of efforts, that were perhaps slightly premature. One of the next things we worked on after the Renaissance was to look at the idea of preservation in Dubai. It seems a crazy word. How do you talk about preservation in a city which is barely more than thirty years old? But, for instance, original workers’ housing clearly was at some point likely to be moved. It was, to some extent, in disrepair. Nothing very extravagant or special, in terms of architecture, but still in the sense of an interesting and working Arab environment, very significant, and totally in contradiction with the glamorous work associated with Dubai. We looked at how we could somehow maintain this kind of Dubai. What we did was see how you could work simply on the old patches, do relatively discreet types of developments there, and in return for that try to maintain that intimate and unique texture that was there. But there again, we miscalculated. We were slightly too early. There are always expats and consultants willing to do what is necessary to make the changes that are seemingly inevitable – and that was the case here. So, in October 2008, we discovered at the fair of real estate that our site had actually been radically razed to make space for this project – a weird three-part skyscraper, incredibly tall. The attempt to maintain that part of Dubai was wrong. As part of our reading, what has fascinated me – about Dubai – is how dominant our reading of it is. By ‘our’ I mean the West. Dubai happened; we participated in its construction. We were complicit in its extravagance. But we were also the first to denounce its absurdity. What I fear now, now that we have declared ‘end-game’, is that we will also be the first to tell Dubai not to be itself anymore, to tell Dubai that it’s over and to declare prematurely an end, not only to an experiment, but also to a real cultural change that has been taking place in and underneath all of this, one that still deserves to reach its own conclusions. I think that it’s a little bit strange to quote Anna Wintour, editor of Vogue, in this context, as if she’s a political thinker, but it is nevertheless significant that New York now looks to Dubai as the definition of what cannot be done anymore. And I really encourage everyone here in the room, do not give too much belief to this kind of material, but instead to what Dubai will eventually have to offer us. Perhaps one of the most significant things we can do is to look at Dubai very closely, beyond the hype and exaggeration, and perhaps then identify a certain kind of beauty that is present here. I simply challenge anyone to define all the sources of this work, but at the same time to see that there is definitely an aesthetic at work, which we may not be able to embrace, but which we have to nevertheless take seriously.

—This is an abridged version of the lecture that was delivered March 17, 2009.

50U is a book about the United Arab Emirates, the UAE. It was published on the occasion of the UAE’s golden jubilee: 50 years ago – December 2, 1971 – the confederation of seven Gulf states was officially declared. It tells the story of the UAE in 50 portraits of people, plants and places, painting an intimate picture of life in the Emirates, with the memories and expectations of its inhabitants.

Visit the book’s website to know more about it and buy it via Archis’ online shop.

50U: INTERVIEW WITH MARYAM MUDHAFFAR AHLI, THE CONSERVATION ADVOCATE