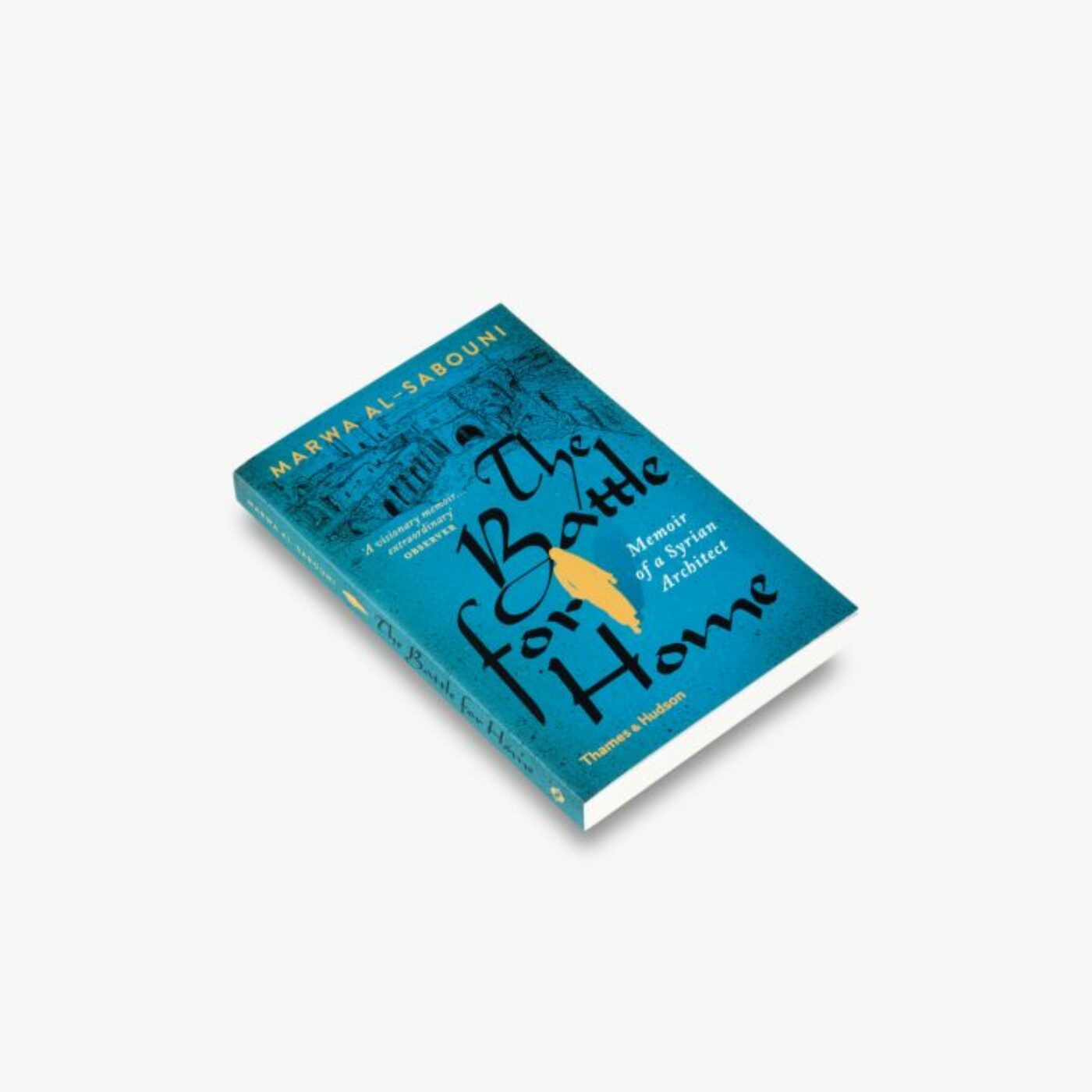 The Syrian architect Marwa Al-Sabouni will be in the Netherlands to give a lecture at the University of Amsterdam on 11 June: ‘From a Model of Peace to a Model of Conflict: The Effect of Architectural Modernization on the Syrian Urban and Social Make-up.’ Al-Sabouni points at the role architecture plays in the prevention, or on the contrary, ignition of conflict. In her book The Battle for Home, she focuses on Homs and how the city was destroyed by architecture even before the war began. In the continuity of the Architecture of Peace project, Lilet Breddels spoke with her in Amsterdam last December when she received a prestigious Prince Claus Award for her contribution to architectural thinking.

Marwa Al-Sabouni: My first articles were published by the RIBA online and in their paper around 2014. These became re-published soon by Wallstreet online Magazine and others.

LB: In that writing you were quite provocative and critical towards your fellow architects and urbanists in Syria.

MS: Yes, basically city planning in Syria is a network of city authority and professors of universities and it’s done in a very centralized way where Damascus’s network has the final word for all the other cities.  There is a lot of corruption in this system in the way decisions are made and there is a lack of informed choice. The people from the administration or the policy makers in the municipality make the decisions, but are not professional urbanists. Often the decisions are depending on the mood of just one person, that’s what I call moodism. Homs for instance became the victim of one person who became mayor and literally called the city plan his Dream. And his dream was to build towers like he had seen in Dubai. He made people so angry that they went to the street for the first time and that was long before the war started. You have to realize that in this process our city was disappearing, street by street. The monuments were destroyed, the ancient houses gone.  This was accompanied by a change in the renting laws that happened already in the 70s and 80s.
The old rent law secured the renters in the sense that renters could not be evicted from land even if they paid a very low rent and the prices of the property raised in between. The new law however said that the landowner should give 40% of the land value to the renter in order to evacuate him. That let to a lot of quick sales and investment scams.
So a lot of the damage was already done when this mayor with his Dream came in 2010.

LB: And all that time you were there working as an architect. Your husband is an architect too right? Are you running an office together?

MS: We had one, in the city center, but that was destroyed.  Recently when things became more quiet we were looking to buy or rent a space and re-open an office, but it proved to be impossible. The prices of property are over the roof right now. Damascus was already listed as the 9th most expensive city in terms of real estate in the world in 2010. And somehow we still have these prices even after all the damage and the destruction.  Because of those changing laws everyone became a property broker hoping to make some money with the land.

LB: So, the land is owned by the property owner?

MS: Yes, all land in the city centers is private. The government only owns land in the so-called informal areas where before the war about 40% of the people were living and now 60%.  In those areas there is a mixed ownership of public, private and half/half. But there the government has the power to confiscate islands of private property which is now happening in preparation for rebuilding. The actual center is privately owned.  Houses in Homs in the center are about 4 floors high.

LB: How do you think the rebuilding is going to happen or is it happening already?

MS: Well there is one big scheme proposed for Aleppo. That is used to show that the government is handling things well. The plan was created by one employee from the municipality in three months. There is random zoning of squares on a screen. As said we lack the expertise to deal with these issues and also the will to use the local expertise that is available. The right person on the right spot is what we lack in how to plan our cities. The problem is that the international organizations have the same employment system. So if you are asking about my hopes… I hope that we wake up before it’s to late and that is mainly why I am speaking out and try to raise the attention to this critical stage.  It is a very challenging and risky stage which lots of cities in the world face after the destructions of for instance the first and second world war. So we must learn from those experiences.

LB: What do you see as a way forward?

LB: Is there enough money to rebuild?

LB: Right, so it does mean that whoever puts some money also has power.  The calculations say that there will never be enough money in the country for just the materials needed for this rebuilt. Nor the amount of water, concrete etc. etc.

MS: Yes, whoever pays decides. Me and my husband talked about that a lot and we think that the only option or change is putting some guidelines. The private property by the private owners will be rebuilt in the way they seem fit. The completely destroyed areas are owned by multiple people. So the way they could get around that is to convince everybody to sell and promise them an investment.  But that is exactly the way our cities have been killed in the past with the rent law. We lost communities and collectivity in this way. So if we want to recreate a sense of community, we found that we have to revive vocations, revive local production of building materials. So my house can be rebuilt with materials and elements of people near to me that are affordable and fast. We have to provide that in the market so that people can choose from that over imported cheap Chinese mass production.

LB: Would that involve also creating more local knowledge? Like learning centers for these skills and crafts and from that creating also jobs?

MS: Certainly.  This is our dream. That initiative could be schooling, documentation and all these services that can provide a product that the local population could chose to use. But also creating awareness to these issues is important. We need voices that raise awareness and point out the consequences that people are missing when they are confronted with a developer who promises a triple return in investment.

LB: Do you see possibilities of that kind of rebuilding not only on the individual level but that of a street or a block? And thereby create an extra step in terms of ‘upgrading’ with respect to collective infrastructure like electricity, renewable energy etc. To make a cooperative off grid area which is less depending on centralized systems?

MS: You see, it is not too complicated. But is does need the will and coordination and accountability. For example, my husband worked on the reconstruction of the old souk. It was supposed to be a pilot project. It used to be a public space in the city where all people went to and even from the countryside; the meeting point of the city. My husband suggested the restoration of the souk to the people of the UNDP and got the commission to redesign the roof.  So with architecture students they documented all the facades and the materials of the old souk and the elements that were there. They stopped the looting of the site. But when the roof was up and the main street restored and the first shops about to re-open, then some people stopped the project through corruption and sabotage. Complaints to the authorities didn’t help and the souk is now partly functioning (where my husband and his team worked) while the rest of it  is still in ruins and empty.

LB: Are there more architects around? Is there capacity?

MS: There are local networks, but there is no testing of their merits. The people who get hired also by the international organizations are hired via networking and lobbyism, not by taking into account a tested skill set. A lot of good people are not even applying for these jobs, because they feel frustrated by the system.  People need to see that the system is sincere and trustworthy. They will come forward when they see a change.

LB: is it already crowded with NGOs and projects?

MS: Yes far too many. There are projects because there is money that has to be spent before the end of the year.

LB: Is there more possibility when working somewhere a bit peripheral? Out of sight?

MS: Well the need is huge everywhere. Even planting trees would be great. There are 27 million trees destroyed by the war. So yes it can be anywhere and we just have to take every opportunity that is there. There are despite all the problems plenty of possibilities to make a difference. We have to create a small network of people who can trust each other and be ready to fight big fights.