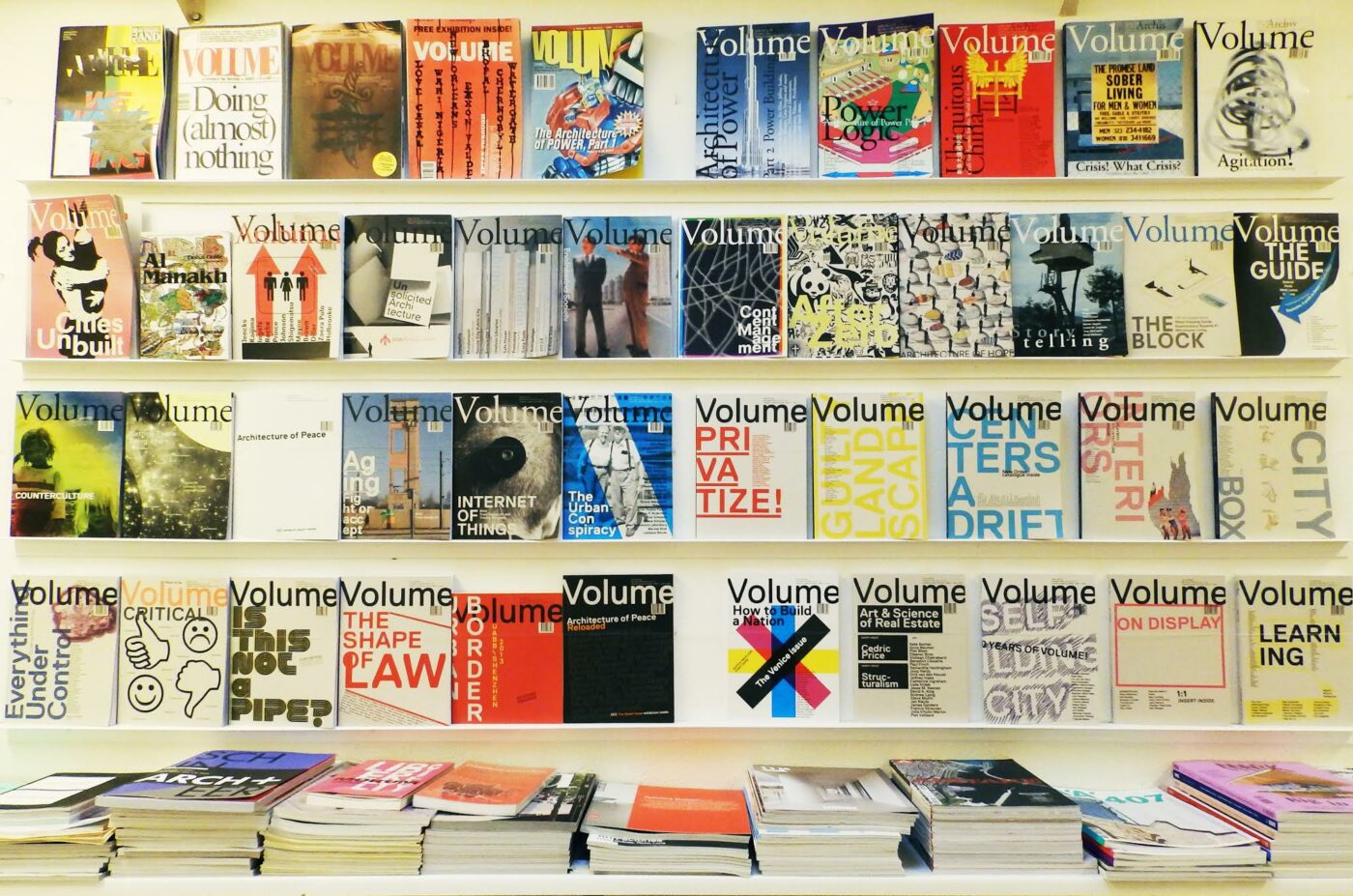 Think You Know Volume? Prove it!

To bring the celebrations of our 10-year anniversary to a close with a bang, we will be holding a competition to test your memory and become Volume’s number one historian. We will be asking ten questions about Volume’s history – one each working day – between November 30th and December 11th. Submit your answers by posting a comment in the Facebook post, sending an email to info@archis.org or replying to our tweet. Whoever gets the most answers correct wins a very special prize: your choice of any issue from Volume’s back catalogue* and our famous tote bag!

Only one answer per person, per question.

Official present or former employees or board members of Archis/Volume and their family members are excluded from participation. (former interns can give it a try though.)

*Excluding the sold out issues. 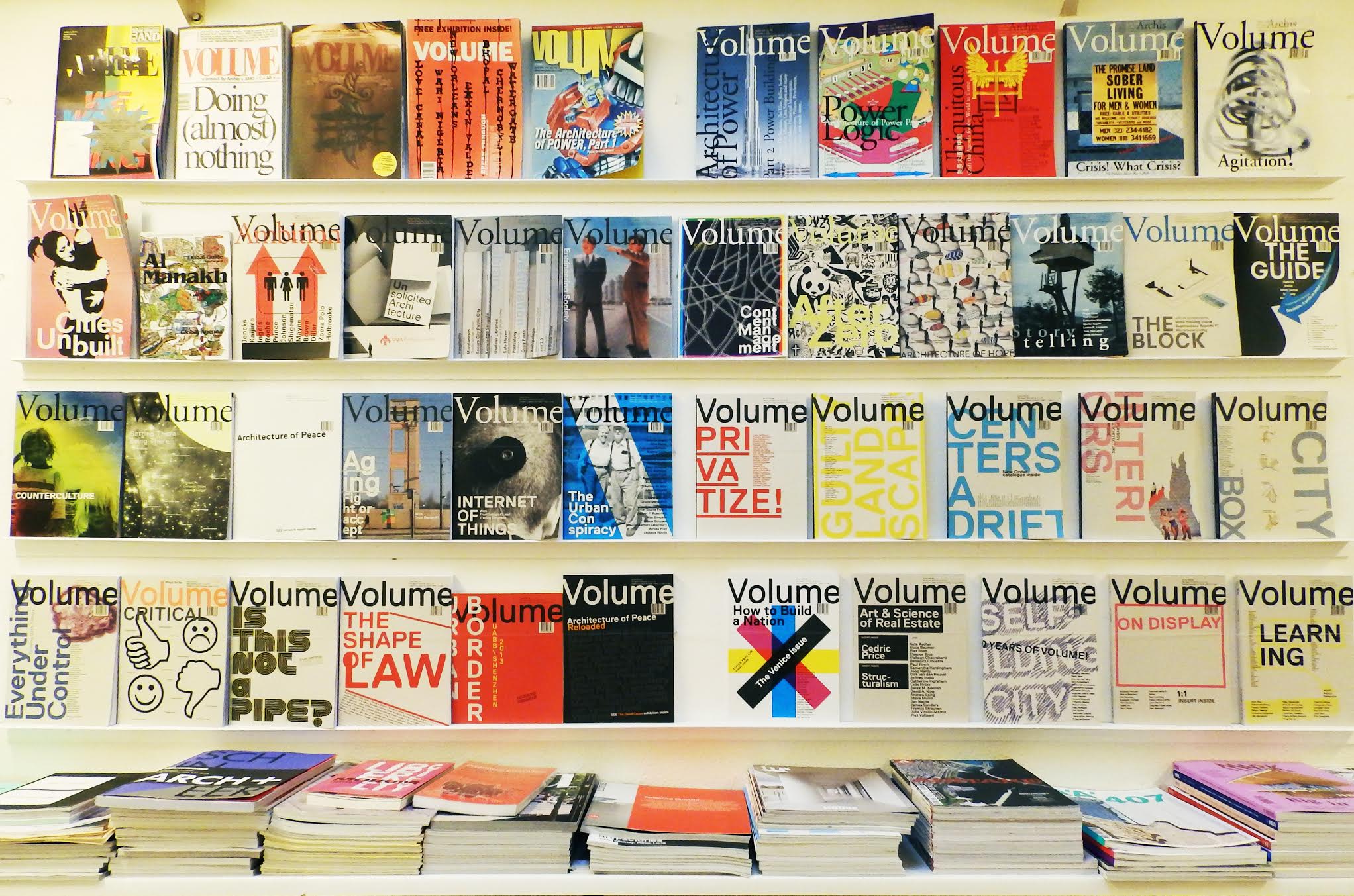 Question (10/10): Which of the following themes is not covered in a Volume issue: The Moon, Biochemistry, Labor, or Smart Cities? 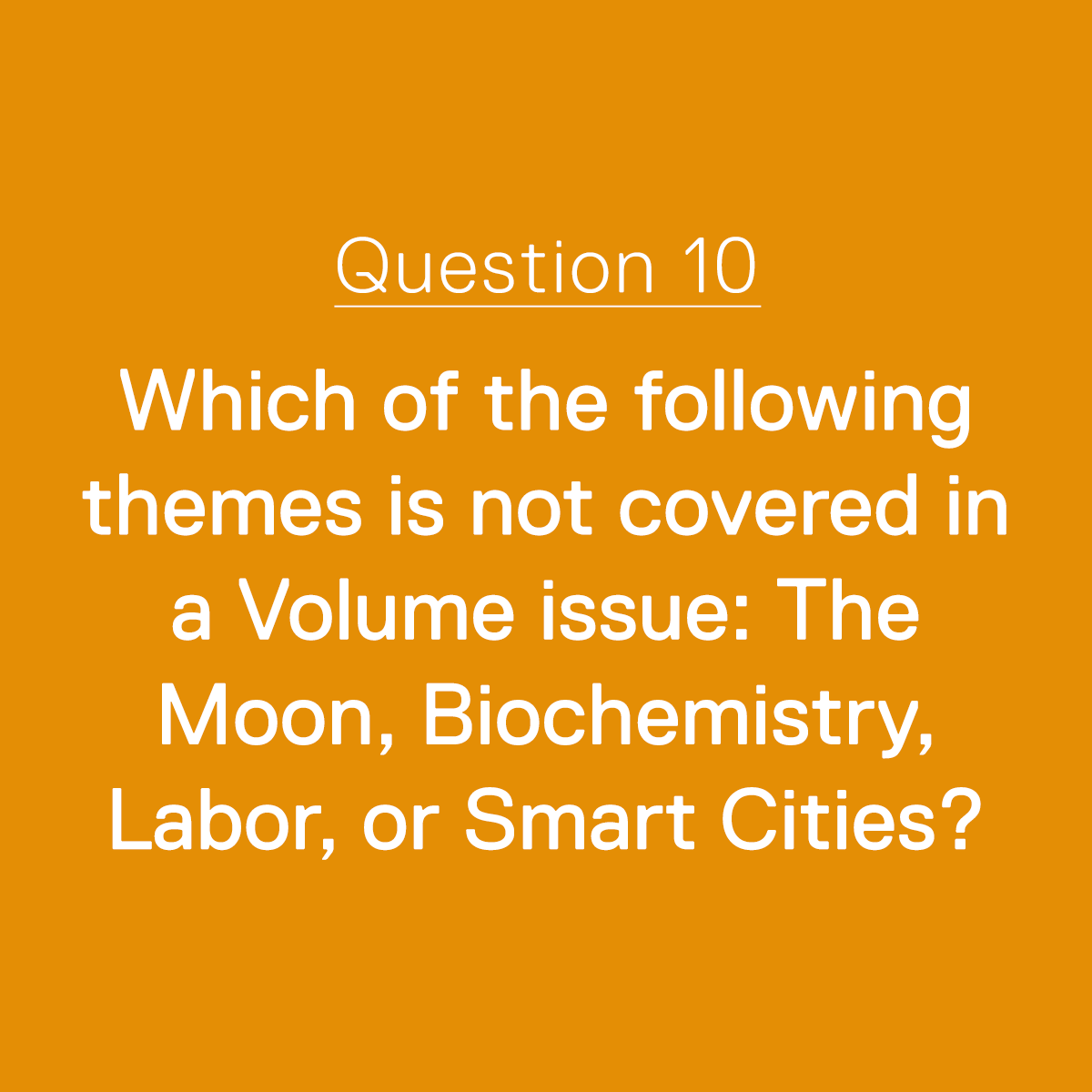 Over ten years, we’ve had a whole host of themes explored that span from interiors to pipes to cities that are built by their residents, but unfortunately labor is not one of them. Volume #35: Everything Under Control examined Biochemistry, Volume #25: Getting There Being There explored the extreme condition of building on the Moon, while Volume #36: City in a Box looked at smart cities. But there is no issue which picks apart the subject of labor. Yet.

Question (9/10): What two Biennials has Volume participated in? 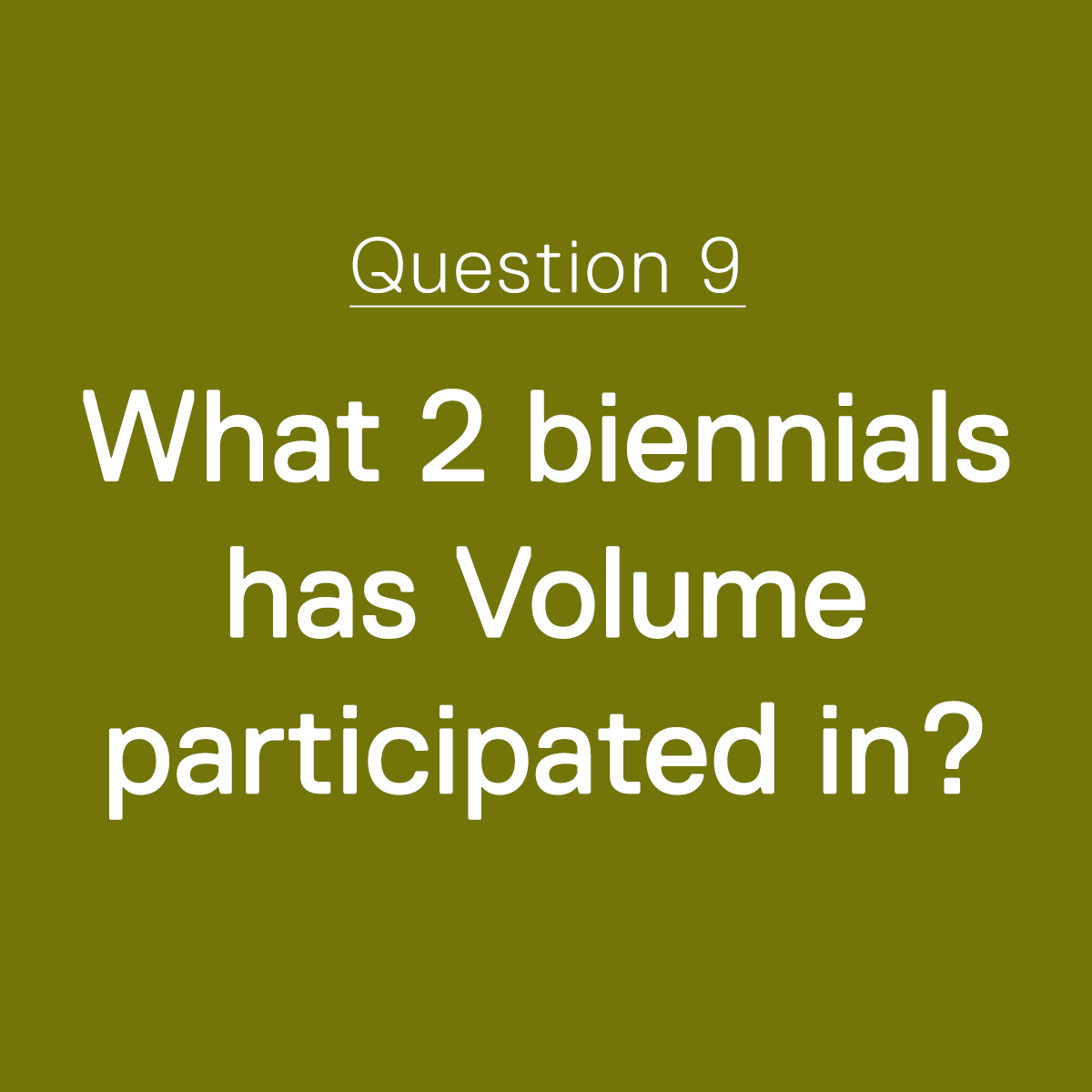 Volume has been lucky enough to participate in two biennials: in the 2008 Venice Bienniale, Volume was part of the editorial team of the Dutch pavilion curating the four day program of debates, lectures and presentations and producing a book on the spot  and more recently in 2013 as a part of the Shenzhen Bi-City Biennale of Urbanism and Architecture. The outcome of our time in China was a Shenzhen-themed issue, Volume #39: Urban Border, which also served as the official exhibition catalogue.

Question (8/10): Can you name five designers who have worked with Volume? 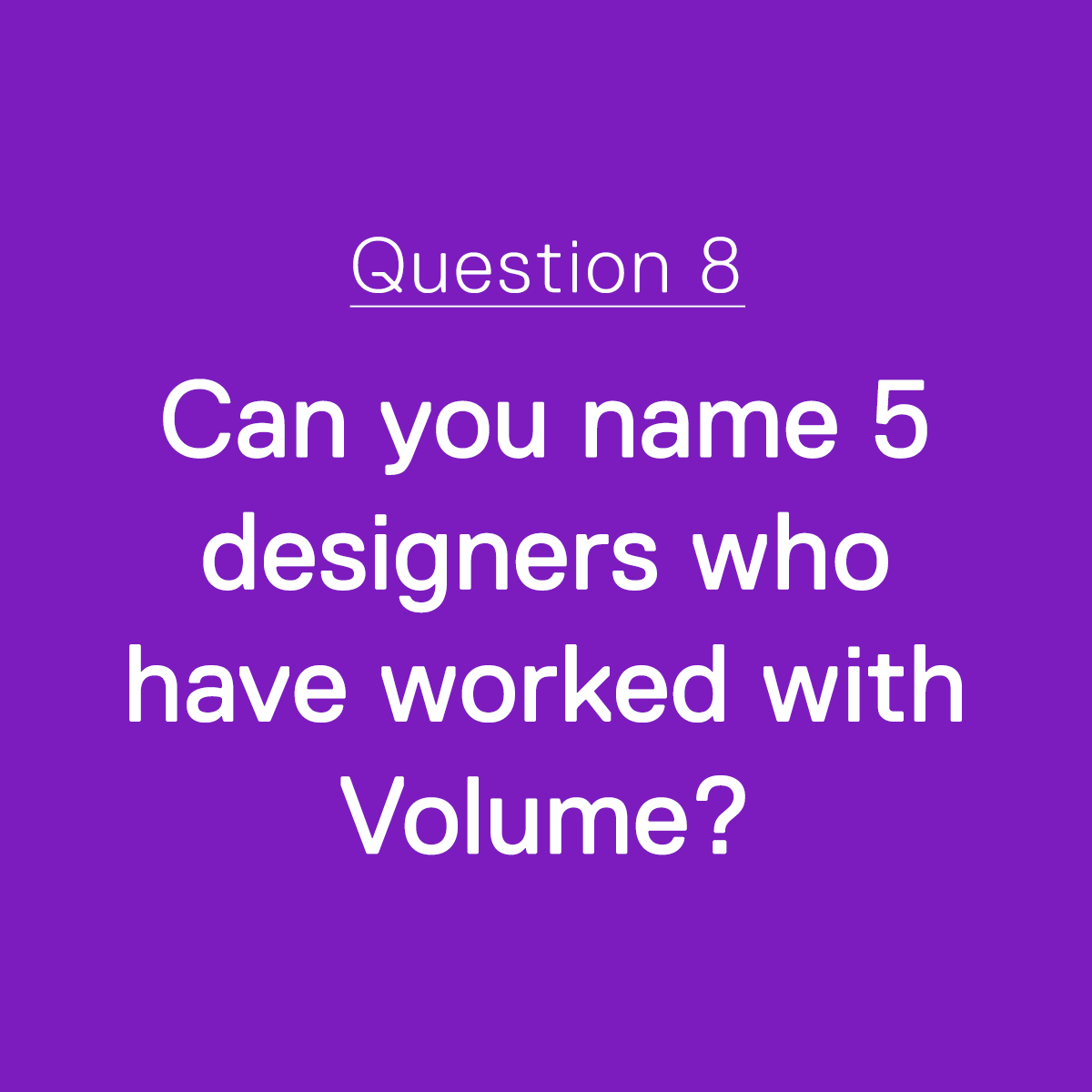 The design of the magazine is a crucial part of the publication and we’ve had the pleasure of working with incredible graphic designers in Volume’s first ten years. From the work of Maureen Mooren & Daniel van der Velden in the very beginning to 2×4 and LAVA, to the arrival of Irma Boom who is still with us today, we’ve never been short of a great visual identity. Other designers include Natasha Chandani, Sonja Haller and more recently, Julia Neller. But that is only describing the core magazine. We could also have asked for the much longer list including those who worked on the inserts we create in and with Volume, like: Bart de Baets, Joris Kritis, Roosje Klap, Katja Novitskova, Edwin Gardner, Patrick Coppens, Jeremy Jansen, Bouwe van der Molen, Ludovic Balland, Oscar David Quijano Robayo, Alexander Shoukas, C-Lab, Het Nieuwe Instituut, Irma Boom Office, Thilo Fuchs, Metahaven, Busha Badri, Elham Namvar, Khulood Khoory, Nawal Khoory, Salem K. Al Quassimi, Studio Beirut, Andrea Brennan & Zachary Lamb, AMO, Berlage Institute, Vanessa van Dam, Adriaan Mellegers, Nicolas Bourquin, Jeannette Gaussi and Amir Djalali.

Question (7/10): What are the names of Volume’s predecessors? (Hint: There’s nine) 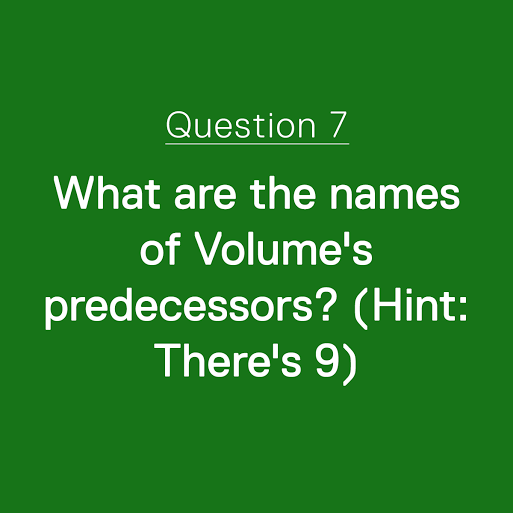 Question (6/10): Why did Volume change its typeface from Volume #30: Privatize? 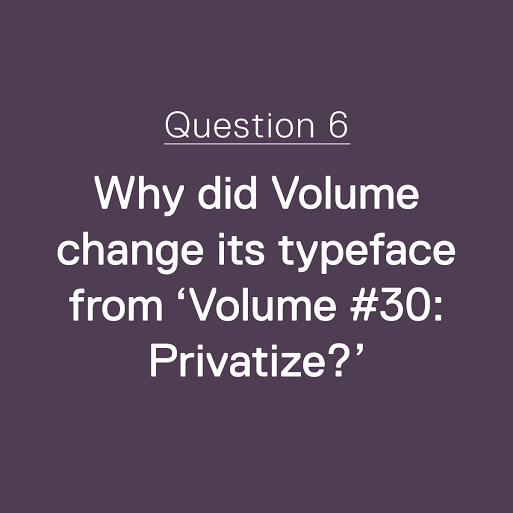 Any of the eagle-eyed readers will have noticed that the typeface used in Volume changed in Volume #30: Privatize. But why? The previous font we were using didn’t include italics in the package meaning all we could do to stress a point was underline the text which, became both limiting and aesthetically demanding. We switched from Neuzeit to Replica which opened up an entire world of possibilities, italics, bold and even underlining if we needed it. We stuck with it ever since.

Question (5/10): How many contributors have published in Volume in its first 10 years? 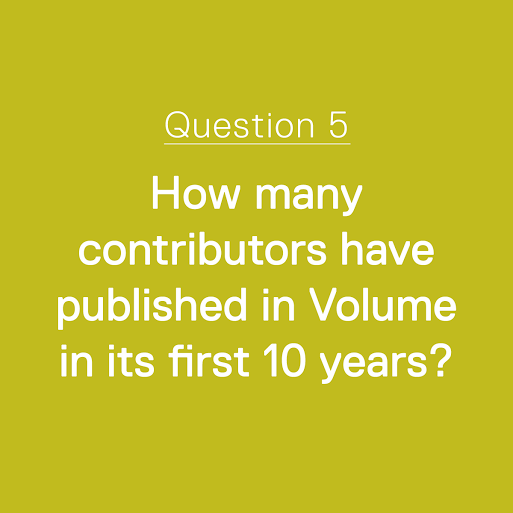 Volume owes its quality content entirely to its 1257 contributors we’ve been lucky to collaborate with. From architects and writers to artists and photographers, from poets and essayist to cartoonists and academics, we’ve worked with a great variety of people from 45 countries and continue expanding our contributors network up until this day.

Question (4/10): Where has The Good Cause: Architecture of Peace travelled to as an exhibition? 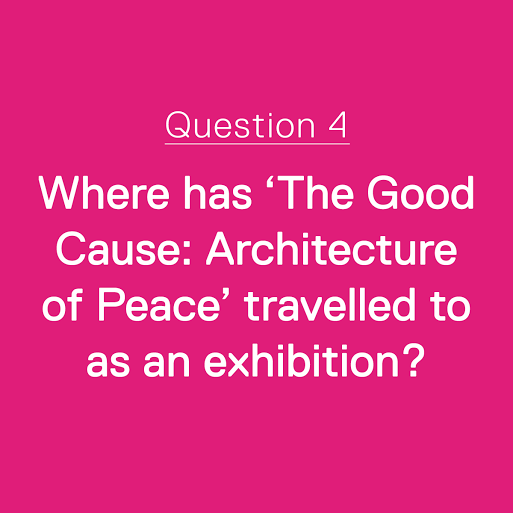 The exhibition The Good Cause: Architecture of Peace is based on  a long-term research project on specific post-conflict situations and the activity of city rebuilding as a means to ensure peace. The research has been carried out by a network of architects, urban planners and scholars and has also resulted in two issues of Volume, two symposiums, and a studio. The exhibition has been lucky enough to travel to six locations, namely Montreal, Kigali, The Hague, Munich, Istanbul and Copenhagen.

Question (3/10): What is the nickname of the plastic casing that first five issues of Volume came in? 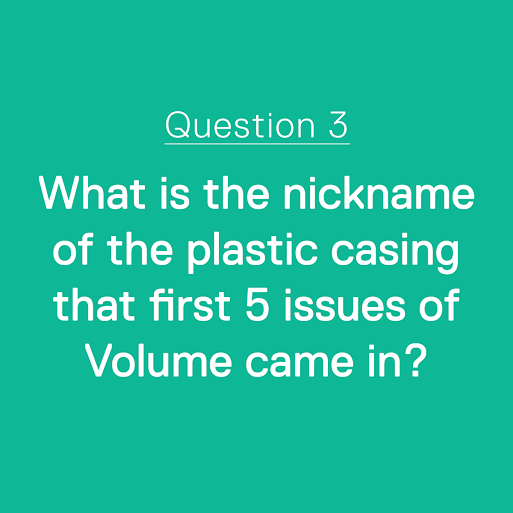 You may remember the plastic boxes that housed the first five issues of Volume. They were the perfect solution to keep the multiple formats and materials that came with the issue all together. Here, at Volume, they have been affectionately referred to as ‘Sushi Boxes’ ever since, due to their similar purpose of holding lots of different things together in one place.

Question (2/10): How many pages has Volume published in its first ten years? 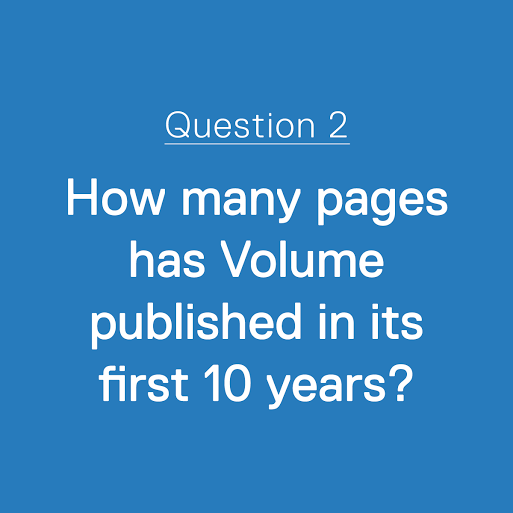 Over the decade, Volume has produced a lot of content. This means a lot of pages and by a lot, we mean 6970 pages. That’s more pages than the Harry Potter series combined. It also averages 166 pages an issue. 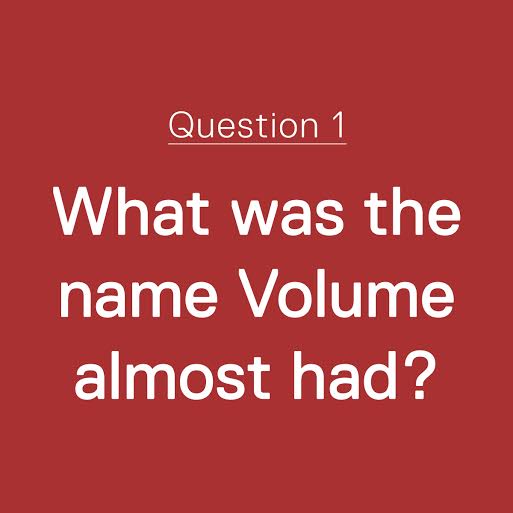 Volume wasn’t always going to be Volume. In fact, it was going to be called something else, the inverse! The original name was Container, but due to another publication with the same name, we had to think of a new moniker. Hence, Volume.