PATHWAYS THROUGH THE JUNGLE. DECONSTRUCTIVISM 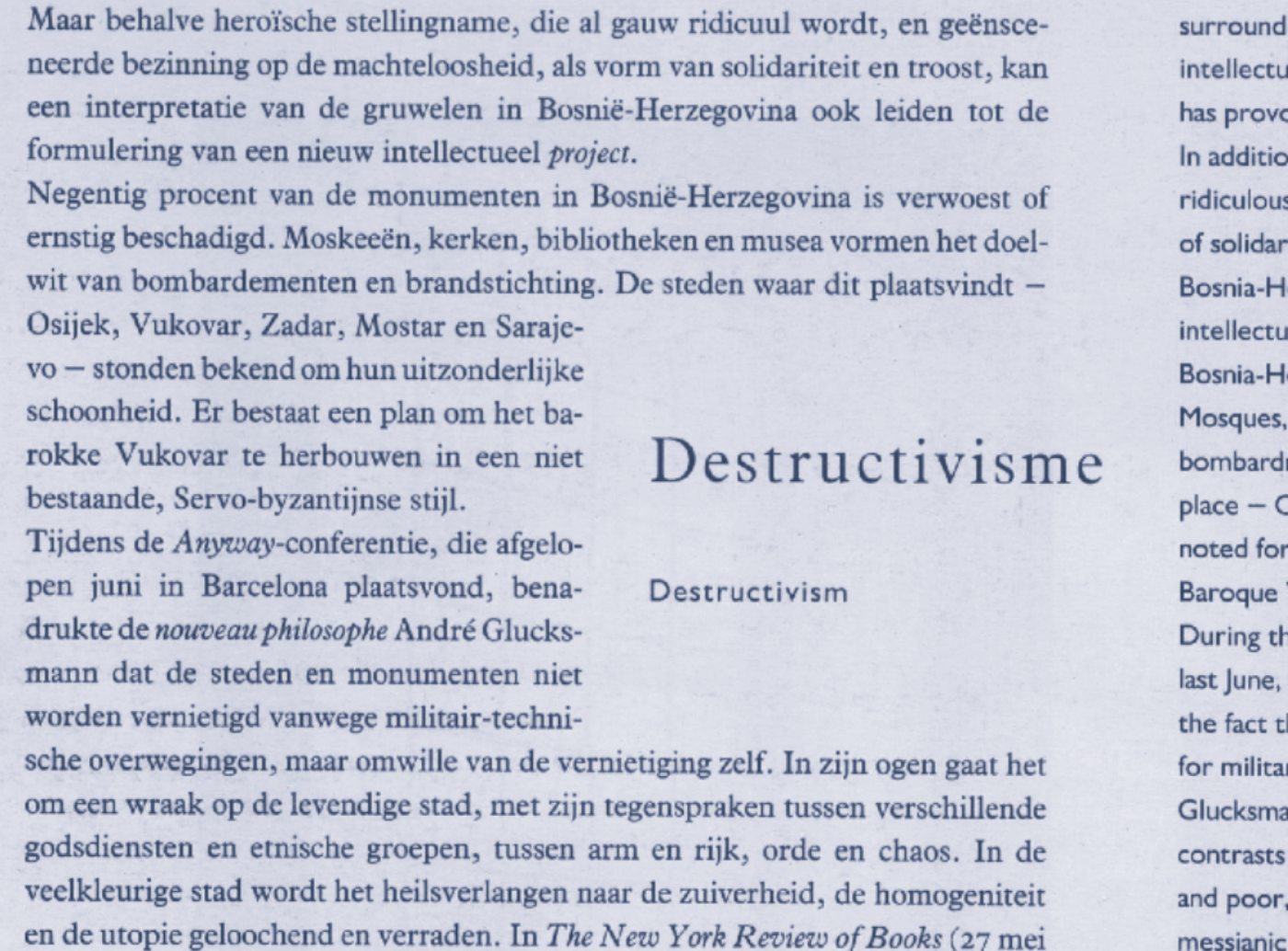 ‘Deconstructivism’ is one of the writings included in Pathways through the Jungle, a book gathering Hans van Dijk’s most significant articles leading the architecture debate in the Netherlands for decades, during the years he was writing on NRC, Wonen-TABK and Archis. The book is edited by Arjen Oosterman, Bart Lootsma and Christine de Baan and published by Archis.

In this editorial, Hans draws attention to the complexity of the war in the former Yugoslavia, which saw the country disintegrate into several small Balkan states. Architects and historians cannot solve such conflicts, he believes, but he does point to the need for new forms of historiography that do more justice to the cultural complexity of today, which is, after all, not confined to the Balkans. As such, it fits both with his interest in issues of cultural identity and with the ongoing theme of the relationship between history, theory and design

Remarkably enough, none of the forty-four essays on ‘Violence Space’ published in a recent special issue of Assemblage (no. 20, 1993) deals with the conflict in former Yugoslavia. Does the reticence of the artists, architects, cultural philosophers and social scientists, from among whom guest editor Mark Wigley recruited his authors, stem from the impotence which the entire Western world, diplomats included, is displaying with respect to this inferno of enforced migration, internment, rape and murder?

Unlike the Spanish Civil War, for example, no clear-cut distinction between the good and the bad side can be drawn. So for concerned Western intellectuals, choosing sides and active intervention are not an option. Here the choice is between barbarism and civilization. For the cultural elite, the impotence itself seems then to be the only subject for discussion. This is illustrated not only by Susan Sontag’s decision to direct Beckett’s Waiting for Godot in Sarajevo, but also by the debate surrounding the historical right and wrong of the ‘engagé intellectual’, from Dreyfuss to Sartre, which Sontag’s initiative has provoked.

In addition to the heroic stand, however, which easily becomes ridiculous, and the staged reflection on powerlessness, as a form of solidarity and solace, an interpretation of the atrocities in Bosnia-Hercegovina can also lead to the formulation of a new intellectual project. Ninety per cent of the monuments in Bosnia-Hercegovina has been destroyed or seriously damaged. Mosques, churches, libraries and museums are the target of bombardments and arson attacks. The cities where this is taking place – Osijek, Vukovar, Zadar, Mostar and Sarajevo – were noted for their exceptional beauty. There is a plan to rebuild Baroque Vukovar in a nonexistent Serbo-Byzantine style.

During the Anyway conference, which took place in Barcelona last June, the nouveau philosophe André Glucksmann emphasized the fact that the cities and monuments are not being destroyed for military reasons, but for the sake of destruction itself. In Glucksmann’s view, it is a revenge on the vibrant city, with its contrasts between religions and ethnic groups, between rich and poor, order and chaos. In the multi-coloured city, the messianic desire for purity, homogeneity and utopia is repudiated and betrayed. In The New York Review of Books (27 May 1993), the Serbian architect and former mayor of Belgrade, Bogdan Bogdanovic, told a similar story. For one hundred years, Serbian national consciousness has been permeated by an aversion to urban society.

Since the European urbanization at the close of the Middle Ages, ‘city’ and ‘civilization’ have been linked in many cultures, and in some languages these words even have the same etymological root. From the outset, however, the Serbian cultural elite has had a horror of cities as hotbeds of Wallachians, Germans and suchlike cosmopolitan riffraff, who interfered with the utopian dream of ethnic cleanness. Architects, historians and other intellectuals cannot end or settle wars. But they can learn something from the interplay of forces in multicultural societies. Architectural history still lays too much stress on monuments as the embodiment of unequivocal, pure and exclusive values and ideals. The cultural complexity of Balkan architecture is, however, scarcely known in the West. Jerrilyn Dodds’ Architecture and Ideology in Early Medieval Spain describes how for centuries Muslims, Jews and Christians lived in each other’s environment, fought each other, but also absorbed elements from each other’s cultures. In Heteropolis, Charles Jencks deals with the heterogeneous architecture of Los Angeles, a city inhabited only by ethnic minorities. It is this type of historiography which is becoming more relevant by the day.

Pathways Through the Jungle is available in English and Dutch in our web-shop.