Machines for Architecture to Be Lived In 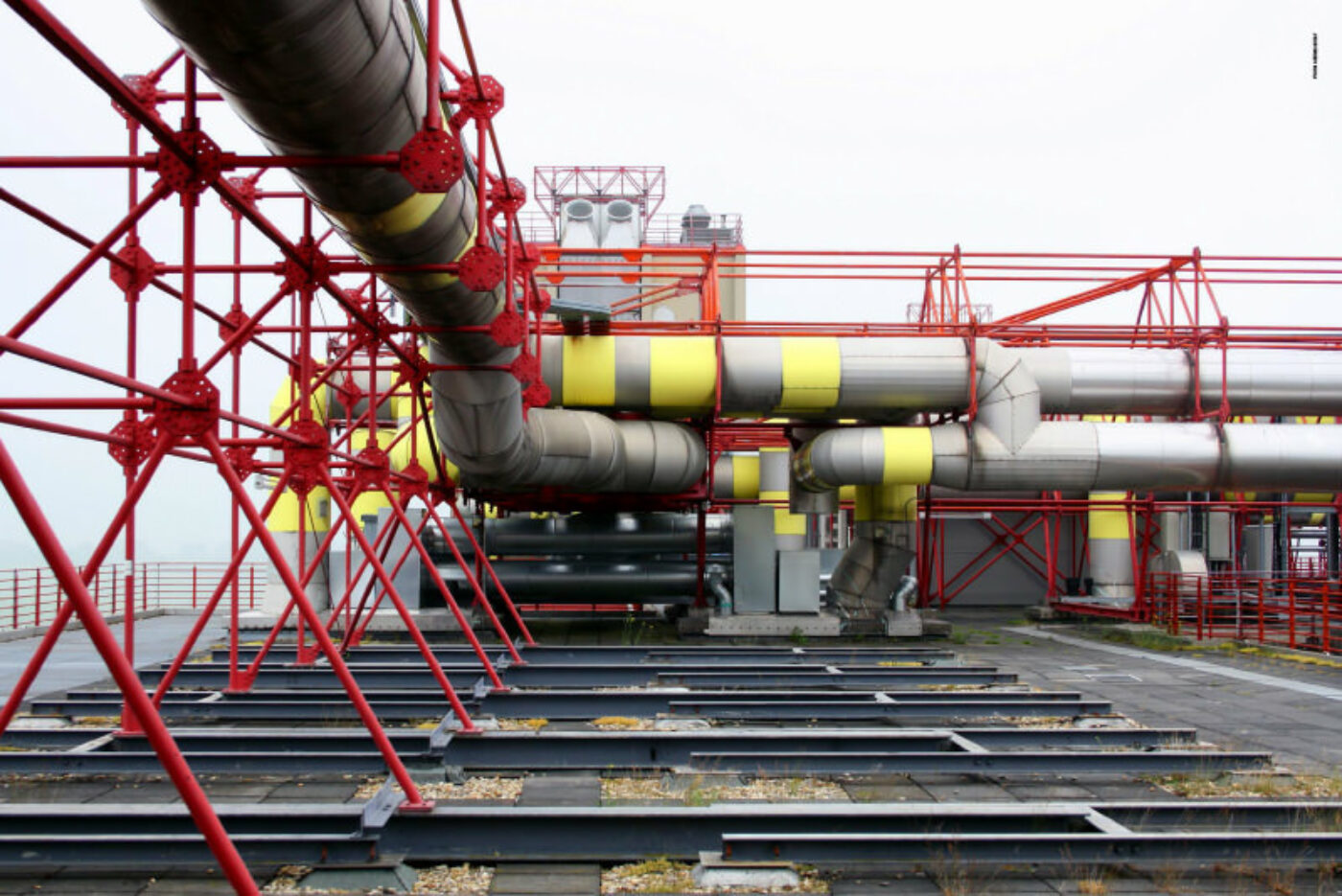 The following article is the editorial of Volume’s 37th issue, ‘Is This Not A Pipe?’.

Architecture relies on machines. They make the structures of our cities livable. In their absence, buildings would lack basic services like water and power. There would be no heating, cooling, lighting, fire safety, and elevators. Repairs and maintenance would be impossible; digital and communication technology also out of the question. The capacity to support life would be severely diminished. Architecture would be reduced to basic shelter.

Modern buildings aren’t equipped to function without machines. Consider the issue of thermal comfort and fresh air: floors, ceilings, and envelopes are inadequate sources of insulation, and so buildings rely on climate control machinery to maintain reasonable temperatures indoors. Additionally, a structure of any significant size and level of occupancy requires an arrangement of respirators and tubes to be fit for human habitation. Even with the assistance of natural ventilation, outside air must be mechanically pumped in and drawn out to circulate enough fresh air to inhabit the space comfortably. Machines compensate for the building’s deficiencies to control temperature and airflow. Machines allow architecture to be lived in. 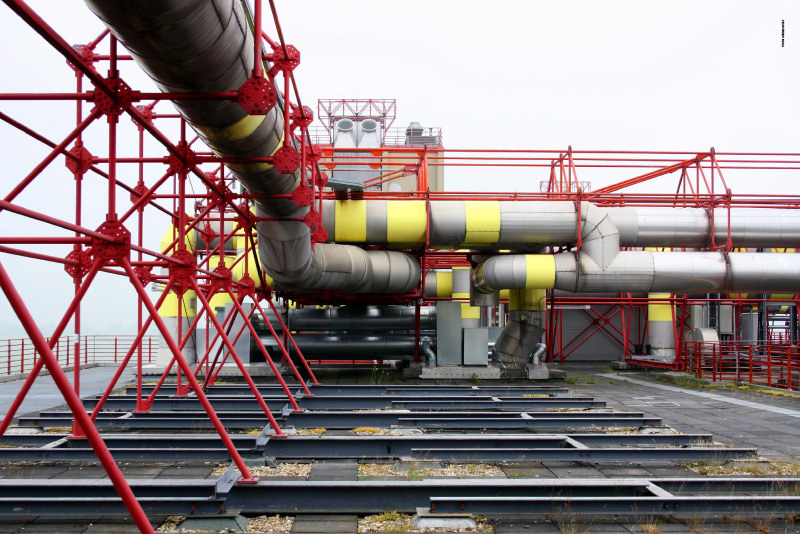 Though essential in function, the mechanical system is typically cast in a supporting role that causes it to perform inefficiently. Often in the design and engineering process the building scheme is first established, then the mechanical infrastructure is fashioned to respond to the determined massing, uses, and organization of spaces. To offset thermal shortcomings, a system of heat exchangers, chillers, fans, trunks, ducts, dampeners, vents, and diffusers is inserted into allotted residual zones. The machinery tends to be oversized since the network of parts is extensive and sinuous – diverted as they are behind walls, floors, and ceilings to remain buried inside the architecture’s physique. This sequence of professional services tends to diminish the system’s effectiveness and reproduces a subservient relationship to a pre-set form.

Thinking about what machines can make possible, not just what they make up for, can inject conceptual oxygen into the design process. Devising buildings that are less dependent on their mechanical systems, where mass and machines work together to sustainably treat the interior, is just one aspect of improving upon this default relationship. Environmental control systems could be employed toward a more inspired aim. If current climate technology is adept enough to counteract the results of poor design, it’s more than able to aid in the service of good design. Thermal controls could serve as a vehicle to explore and realize new building forms.

The featured projects in this issue will remind readers that architects have previously incorporated climate control methods to attain desired architectural outcomes, crafting the technology to give the salient features of their projects a higher degree of intensity and resolution. Looking at the works, we can extract principles for using technology to clarify and refine design qualities, and we can appreciate the specific architectural opportunities they give rise to.

Each can be viewed as a design platform – a technical foundation to investigate specific architectural propositions and territories.

Because the system can manage the air from above and below the inhabited area, the structure can be conceptualized with the knowledge that climate-related parts will be absent from the space. The temperature on the main level of Mies van der Rohe’s Crown Hall, for instance, is maintained by equipment embedded in the roof and floor, enabling the structural expression of a column-free interior unobstructed by mechanical technology. This arrangement of the climate control system offers the opportunity for such a building type to expand horizontally as far as the principle technology can accommodate. The space can be scaled outward, without mechanicals protruding into it, to the extent that the structure can span.

SANAA’s Toledo Glass Pavilion uses the mechanical system to resolve the dense layering of interior spaces. The inventive method of thermal control afforded the architects elbowroom to shape the serpentine walls and diversify the types of internal configurations while fulfilling extremely different climatic requirements among rooms. Comments by one of the engineering consultants, Matthias Schuler, and SANAA’s then project architect, Florian Idenburg, reveal the irreducibility of the mechanics and form to the architecture’s effects. The glass walls, and the spaces between them, protects the interior environment while producing the atmosphere of the experience – creating alternating vistas and reflections, oblique views through curving panels, and sequences across open and enclosed spaces.

Instead of layering identical floors linked climatically by fans and vent stacks one on top of the other, the interior can be opened up with continuous vertical spaces carved from a series of floor plates, creating a spatial rather than mechanical connection. Philippe Rahm activates the vertical dimension of the interior by channeling the air upward to service the building. In place of the standard battery of machines and tubes to temper the air, the interior itself functions as the conduit, where as he describes, ‘people live inside the duct.’ In projects like the Convection Apartments he steps the floor slabs to condition the terraced areas as the warm air rises. The result is a ‘free section’ with horizontal planes that outline volumes, or voids. This logic also inspires a distinct figural language on the building’s exterior. Conceiving of the design from the interior environment – where the form follows flow – gives way to a repertoire of lifts, tugs, and pulls to the overall massing; the interior climate enriches the building’s gestalt.

One building feature can dramatically lower energy consumption and serve as an effective sustainable strategy for the building as a whole, thereby lending greater a versatility of purpose to other features. Norman Foster’s Willis Faber & Dumas headquarters employs an environmental technology that grants tremendous theoretical leeway in imagining the urban design role of the plan. Architect Neil Denari explains that the grass roof deck, which comprises a large percentage of the deep low-rise building’s external surface area, acts as a thermal mass that sufficiently moderates the interior temperature. It decreases the total heating and cooling loads to such an extent that it sets into play a law of diminishing returns, alleviating the practical need of reducing energy consumption through the composi- tion of the plan. In light of Foster’s technological utopian interests at the time, it’s easy to see this combination of green roof and free-to-shape plan as a script for an automatic urbanism that can be applied in many locations to yield different outcomes, thus giving the architect the carte blanche to experiment with the form of each iteration.

Machines are vital to the life of buildings and it would be undesirable to have architecture without them. It would be better in fact if architecture were itself conceived of as a machine whose forms, spaces, and technology col- lectively condition the interior. Certainly, this technological aspect doesn’t have to be seen in the experience of the architecture, just as buildings today and for that matter building machinery, don’t look like the technologies housed within them. Instead, the form the technology takes on could be in service of the architect’s preoccupation, as they are here in these examples, laying the groundwork for an inquiry about space, figuration, or urbanism. In other words, deepening the dialogue about climate technology can circulate novel strategies for how to integrate buildings and machines, and give architecture a breath of fresh air.

How Do You Do Biodesign