From Retrospect to Relevant

Since the architect-artist Luc Deleu (1944) founded T.O.P. Office in 1970, the bureau has made some thought provoking and critical contributions to the Flemish architectural landscape. Now that the office has celebrated its fortieth anniversary, Wouter Davidts, Stefaan Vervoort, and Guy Châtel found the need to bring Deleu and his office back to attention by composing a monograph.

The human, urban, and global scale, as well as the concept of scale itself form the starting point of the architectural office, which could be called a research bureau more than an actual architectural practice. Building has never been its priority, because when you build something you really have to add something to the already saturated world, and not simply build just to build. The goal of the monograph is a “theoretical exploration of the work and practice of Luc Deleu and T.O.P. Office“ in which seven themes are each addressed by different written essays, a visual essay – created by fourteen different contributors – and a visual essay for every theme that was composed by Luc Deleu himself. 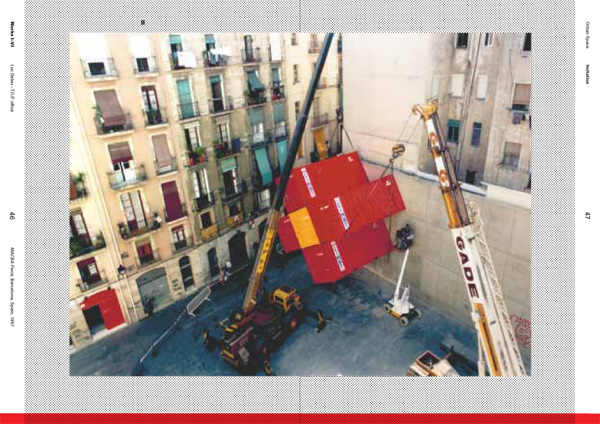 The importance of visuals, is supported by the design of the book carried out by Metahaven. Different types of paper, a Belgian flag in the cut and a text layout which is indented for both sides provides the book with a distinct look. The outcome of the design is twofold as most images are tool small to read properly, though it looks good: the design adds an extra element to the book, making it more than just a nice read, but also a desirable object. 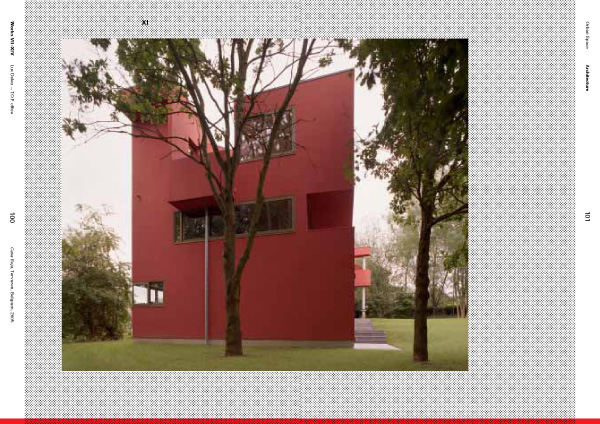 Off course, visuals are of main importance when it comes to illustrating an architectural practice, and in this case the visuals outnumber the text – by far – and are more than mere illustrations.The visual essays function as autonomous contributions that provide insight into the work and the process of T.O.P. Office. They exist out of collages containing inspirations and references, as well as imagery that supports the ideas of Luc Deleu. An example is the documentation of Luc Deleu’s journeys around the world. In these cases we can see how much the of world, its inhabitants, and their built environment is similar, and sense how small our globe really is. An image that supports this notion is that of the planet earth seen from outer space. This image is featured several times and is also one of the frequently used references in the different written essays. The image illustrates the notion of scale and the fragile relation we have with our ‘spaceship’. 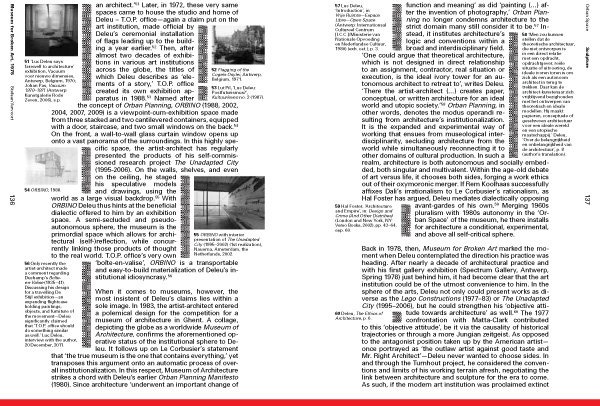 Overall, scale is the most important topic within the oeuvre of Deleu. He argues for a change in the way we view the world with a zoomed-out perspective; at a global level, instead of the scale of individual buildings or cities. Orban Space, the title of the book, is the term he launched for this concept which entangles the entire earth as one large living environment. The architectural practice of Deleu addresses this concept by presenting provocative proposals that address this way of thinking. For example, in 1972 Deleu proposed three aircraft carriers as accomodation for the University of Antwerp. Here he raised the idea that military equipment can also be used in a positive manner, by becoming a floating city and engendering citizens with a global experience. In 1983 Deleu made the size and scale of electricity posts sensible by presenting them horizontally. He used a similar approach in several sketches in which he presented skyscrapers vertical as well as horizontal, sometimes next to each other, which both looked completely different; addressing perspective, perception, and the relativity of size. 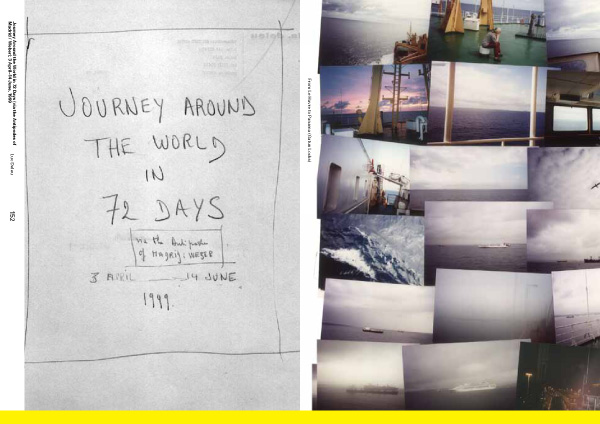 Furthermore, throughout his career Deleu identified and (thereby) questioned certain modes of working whithin the (Belgian) architectural system. Already in his first exhibition, immediately after graduating, Deleu rejected all the examples and theories that were taught to him during his education by literally crossing them out. Then, during the seventies and eighties he put the Belgian status quo to the test by, for example, agreeing to every building proposal, as the institutionalized architect is allowed to give out permits just by his signature. T.O.P. Office: Orban Space presents Delue as a skillful thinker and artist, whose work continuously questions and stretches the existing architectural status quo. The critique that he is unpractical and utopian can be countered by stating that his concepts serve as thought provoking experiments that extend established meanings and possibilities of architecture instead of being utopianesque final ideals that are applied on society from the top-down. 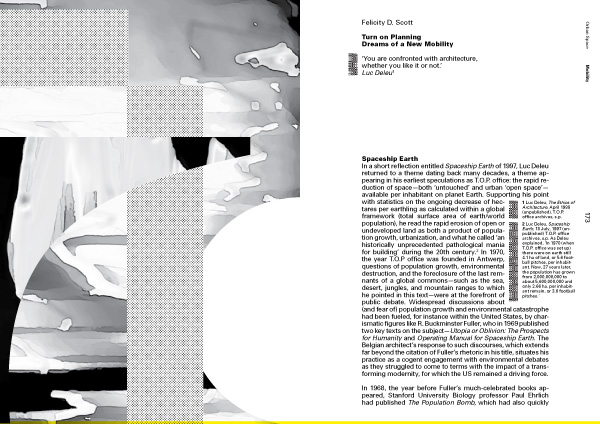 Still, historically Delue’s significance is rather marginal and his ideas did not cross the borders of Belgium on a regular basis. He is most famous for his Lego and container sculptures that are considered ready-mades that address the global movement of goods and thereby global interconnectivity. Up until this publication the knowledge of his existence and practice was bound to go extinct. In this sense the editors countered a possible oblivion and the absense of documentation of the work and concepts of T.O.P. Office. Throughout the book Deleu is historically contextualized, which every now and then seems overly constructed. Also, the number of interesting concepts and projects is limited which provided the different authors also with limited ground to base their texts on; consequently they frequently use the same references and projects. Yet it is a successful monograph. The book presents the mental gymnastics of Luc Deleu, with an eye for scale and alternative approaches for the world of the future. 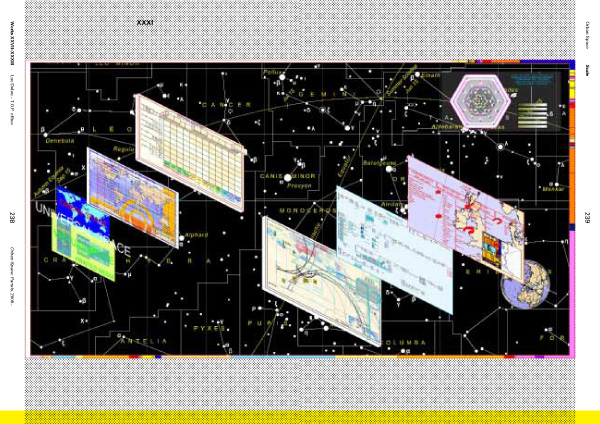 The related exhibition at Stroom had the same title as the book. Deleu’s adagium ‘Less is Less’ was spray-painted on the gallery window; and was strictly followed throughout the exhibition: the show consisted solely of maquettes, pictures, and the ‘Orban Space Terminology’ – an encyclopedic overview of terms associated with public space, worldwide –, next to a movie in which Deleu browses through his contemporary version of the Moleskine while explaining the images and inspiration during a voiceover-conversation with Jef Lambrecht. The booklet that was freely provided as guiding text was heavily needed as explanation and context, because the maquettes and images did not provide any information themselves. This of course is a frequent problem concerning architecture exhibitions; either becoming a reading exhibition or being strictly visual and thereby becoming inaccessible for any visitor who is not already familiair with the presented work. Orban Space represented the latter. 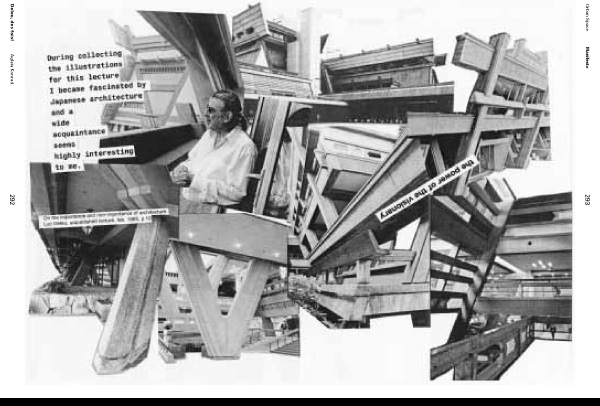 Several of Deleu’s ideas have recently become fashionable and his interest in ecology and social interaction is seeing a revival. One example is urban farming, which he introduced in the seventies as Proposal for Urban Agriculture. Deleu has always criticized the superficial symbolism of neoliberal architecture and also disapproved demolition and the idea of tabula rasa. According to Deleu, small, extensively thought-over and well placed interventions are the way to go – an idea that is increasingly underlined by a new generation of architects. Research and analysis of existing conditions and possible forms constitute the essence of a proposed Turn On Planning (T.O.P.) and the bureau’s mission. Also, looking at the built world at a large-scale is becoming increasingly important, due to global environmental issues. Likewise, the essence of architecture itself is changing: a more modest form of architecture, together with attention for actual people seems to embody a Turn On Planning in process. 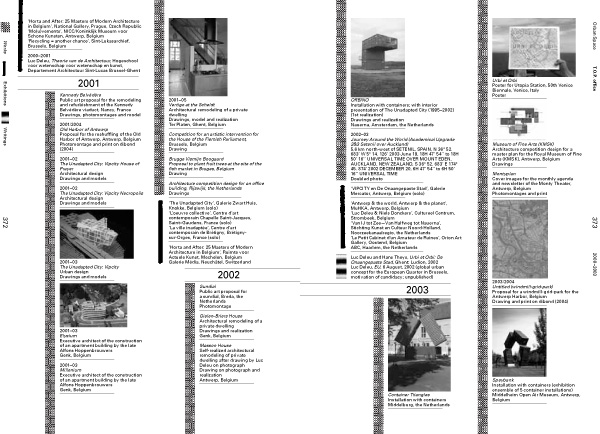 This connection with today’s dispositions is ommited by the editors: they do not explicitly identify the relevance of Luc Deleu when looking at contemporary tendencies. Furthermore, the editors do not take a stance or explain the meaning of Luc Deleu in a manner that exceeds a theoretical exploration: a regretful shortcoming of the book. As the reader can sense that especially now, when several of Deleu’s concepts have come to fruition and research-based architecture in a saturated world is becoming increasingly important, one could identify the reason to produce this monograph at this particular moment in time. When the editors would have highlighted this and provided the writers with an opportunity to connect the theories of Deleu to present-day tendencies, it would have made for a more diverse and thereby increasingly interesting, which would have elevated the book from retrospect to relevant.

Archizines: The Magazine as an Art Form