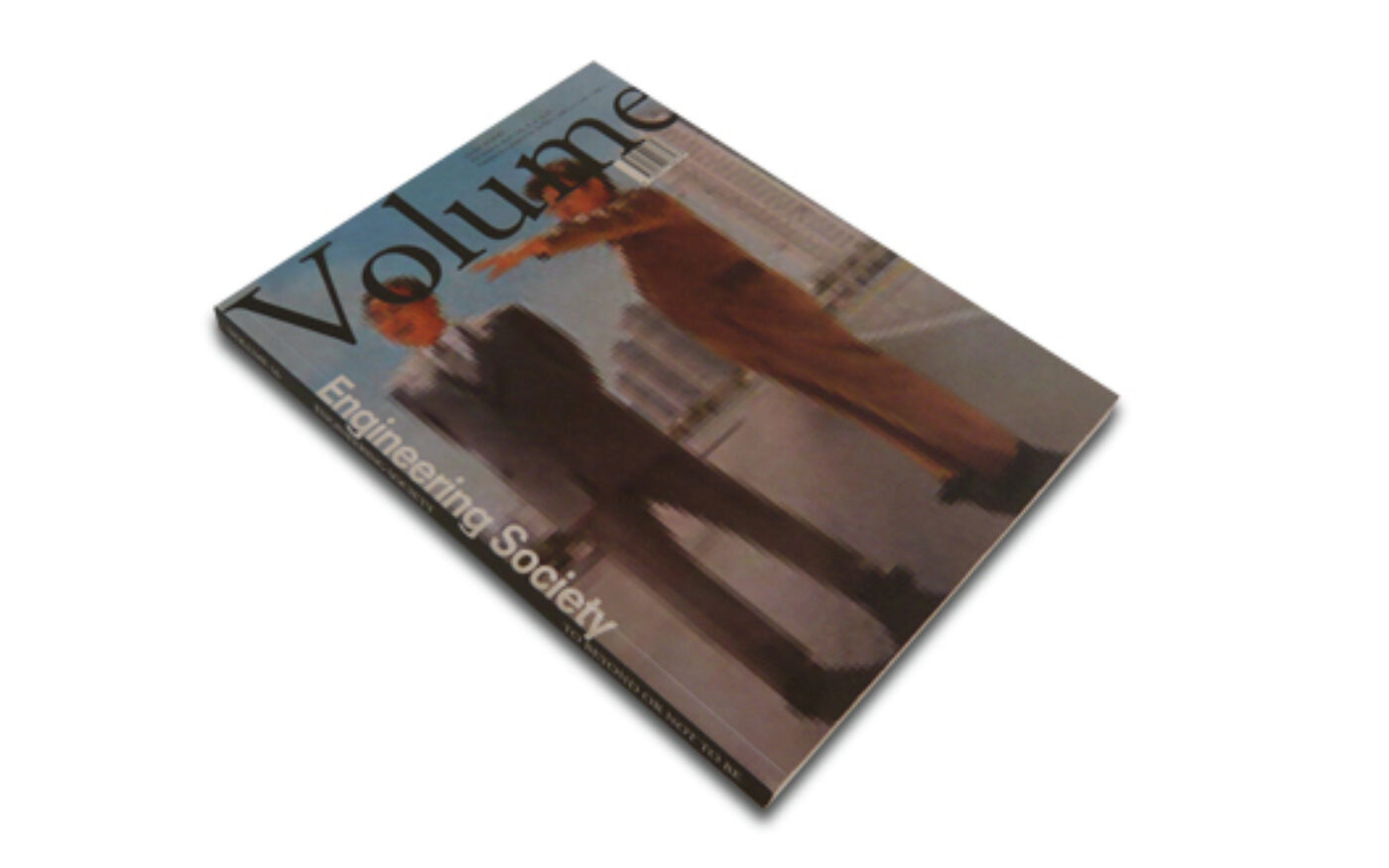 Eight years ago, Volume dedicated issue 16 to Social Engineering. It was like swearing in the church, a no go zone, radioactive stuff. We (internationally) had just liberated ourselves from social engineering, hadn’t we? The share economy was just emerging, bottom-up not a buzzword yet. It’s been a turbulent eight years, with call for leadership and attempts to get rid of leaders, with questioning power yet demanding rule. Would the mild form of social engineering advocated by Ernsten and Janmaat in V16 be a way to go? To mediate between global and local, between neighborhood and country, between the self and the collective?

After Post, Ex, Neo, End and Re Manifesto
Christian Ernsten and Joost Janmaat

Just before the turn of the century, the end of history and the fall of the centralized city were proclaimed. Instantly, we were all inhabitants of a generic city in a one-dimensional society – beyond ideology, beyond identity, and beyond morality. Liberated from that emotional clouding of our society, all we needed to do was focus on the sustainable and effective organization of economy and space in our global suburb. At last we could steadily achieve world-wide prosperity, assisted by managers, experts and their consultants. How humiliating was the actual turn of events!

At the start of the new century, we saw the emergence of new ideologies, great and small. Ideologies aimed against Islam, terror, migrants, the West or decadence, or, on contrary, ideologies advocating freedom, justice and independence. Great and small contrasts between groups and ‘the powers that be’ created new interdependencies and new, all-round identities. The great quantitative programs intended to produce order and development, like the Structural Adjustment Programs of the International Monetary Fund and the World Bank, are highly criticized, the World Trade organizations and international development organizations are being ridiculed for being neo-imperialist. Suspicion and deprivation are in fact growing on a universal scale. The world has become a village of cosmic proportions. And the awareness of this tremendous scale in our society in relation to the complex global connection between local communities is leading to a greater feeling of impotence. The managers of prosperity have proved to be crisis managers without success formulas.

There is an immediate need for reactivation of the utopian mentality: a vision-based, quest for interventions generating local improvement. Thinking great is not the problem, large-scale social experimentation the more so. So: a plea for a new style of social engineering – behavior-steering inspired by local wisdom, with a braver society as its universal goal.

Social engineering is a controversial term harking back to the politics of apartheid and the ‘white man’s burden’, but also post-colonial projects in Africa, and Stalin’s experiments in the Soviet Union. Moreover, the term crops up in the context of utopian and modernist architecture, as found in the garden cities all over the world. In spite of its tainted past, the word deserves a new interpretation. After all, Social Engineering, the practice of changing society intentionally, is more than the ponderous combination of dream + power + absence of resistance. Although national players are usually the ones claiming responsibility for progress in society, and propagate most emphatically ideologies about their dreams for better societies, other social engineers have always been with us. In commerce, in architecture, in the sciences, in the media, the churches and advertising. Those groups, too, have guided changes, with their specific tools. But they claimed less responsibility, or else did not act on behalf of all society.

One of the foremost contemporary theaters for the makeability show, where the titans meet in a liberation war with a clearly commercial/political ideology, is probably Iraq. With strong political will, an intimidating amount of money and power, plus a long troika of sub-contractors, attempts are being made to pound a new society out of the ground. That is the extrapolation of old-style makeability, making society from above.

However, an entirely different kind of makeability is coming about in entirely different theaters. The very lack of political clout and financial resources obliges state or city to join forces with other makers: branding agencies, spin doctors, housing associations, investors, but land owners, press officers and interest groups as well. In a combination of public, semi-public, private and semi-private projects, working together or against one another, they shape socio-economic and spatial development.

It is not particularly difficult to make a stand against the old power-makeability and the newer diffuse makeability projects. In both cases the projects can be described as having an a- or even anti-social character. They are still authoritarian, hierarchical and control- and will-driven. Accordingly, the attempt to generate successfully an equal amount of dream power and decisiveness is far more interesting; that makes use of applied experience, and local knowledge and skill. The aim is to create an operating perspective, after all the great ideas have seemingly lost their legitimacy.

How? To start with, because these days every individual or group can acquire the tools of advertising, politics, design, media and commerce. Many of the power, media and technology barriers have disappeared, and thus the road leading to a change in mentality is now clear. There is room to move away from the arrogance and dominance of experts – away with conceit based on status and jargon. On the contrary, bring in respect for experience and commitment, both inside and outside institutions. Expertise is based far more on trial and error than on charisma and rhetoric.

An important paradigm for the new-style social engineer is the disbelief in utopia, a disbelief in the creation of a society that is excessively superior to the one we are living in. It means ideological rhetoric loses its purpose and the tools necessary for positive social change occupy central stage. Just think of a cocktail of the DIY-culture and a quest for talent and quality as found in the ideas of the Enlightenment. A renewed interest and a desire to take your own makeability and your personal living environment as the starting points for a makeable society.

Let us reveal more of our credentials: we are interested in the way IKEA popularized interior design and H&M democratized fashion, but we also have questions about sustainability and originality. We strive to include participants in society in the transformation process without losing steering power. So social engineering is commitment and active participation. After all, society is a social undertaking, an assembly of convenient coalitions between individuals in which discussions on justice and equality vis-à-vis power and design determine degree and pace. In this under- taking, the debate on the application and influence of knowledge is very important, both materially and psychologically. It is a debate about the organization and transformation of the built and the cultural environment.

Apart from entailing a different mentality, new-style social engineering also constitutes a specific approach to society. You often hear about the distinction between planners and seekers, in the framework of a developing economy. Planners are in the business of realizing a development agenda based on lucid data, a clear strategy, a belief in progress and the support of a state.

On the other hand, there is the practice-based seeker. A seeker proceeds from an awareness of society’s complexity, thus on an aversion to simplifications of reality, seeking to tie in with local, existing practices for change. These are initiatives that have proved themselves by trial and error. Seekers are more like facilitators of solutions that had already been found locally. They do not necessarily find answers, but only more questions sometimes. The seeking approach is the more appealing to us. Seeking makes social engineering a research praxis: you can better understand society by way of interventions and the reactions they produce. A radical break from the old school, in which social engineering primarily presumed a social approach following a set pattern.

In any case, questions are necessary because society as a social organism changes – something that requires repeated redefinition of the relationship between identity and space. Every change is a rearrangement of the puzzle. And so the fixation on end products or the focus on meeting planning agendas is pointless. In the short term, end products rule out certain changes and the concomitant responses, but in the long term they do not provide a lasting improvement. There are, moreover, unpleasant side effects to development control. Added to which, political and down – the bigger the market, the more fragmented the identity. That need not be a problem; it can also force us to take a new focus. If we are to shape our society further we must look beyond the masses. And modern technology enables us to do just that; individuals can publish, mobilize and create. A focus on the personal aspect is a way to give individuals a role in the transformation of their own world.

Consequently, our focus is on maintenance work and inspiration for positive renewal. Although change happens automatically, improvement does not. It requires continuous commitment. And for drastic interventions in society it is essential to have a seeker’s mentality in order to keep design dynamic. We do not aim at participative projects as such, but projects in which maintenance of society is combined with a change in mentality in all participants: bureaucrats, entrepreneurs, professionals, scientists and citizens. In that way positive change occurs ‘from inside’ and ‘from outside’, without global scaling up leading to mental scaling down.

Ultimately, we believe social engineering is equivalent to taking responsibility for change in everyone’s immediate surroundings. It also stands for applying the human scale as your benchmark. The human scale can maintain equilibrium in relationships within society. Some very important questions are involved: how do people relate to their surroundings and what deter- mines who they are or who they think they are and where they want to belong, or who they would – or would not – like to be? The personal aspect is the safeguard against the totalitarian aspect.

For the social engineer, idealist dreams exist to live for, yet an ultimate society does not exist. That realization demands humility and self-relativity when our environment is engineered. Social engineering covers a challenging combination of responsibility and desire, of modest ambitions and great dreams, of question and answer. It is, therefore, a praxis that demands acceptance of moral contradictions and openness towards unknown knowledge. A praxis that is on the move, because action is analysis, or leap before you look; only with an unremitting realization of freedom and an unremitting application of change will new wisdom and new worlds be born.