For the tenth anniversary of Volume, Timothy Moore, director of architecture practice SIBLING and former managing editor at Volume, remembers an early issue of Volume dedicated to power where image came to the fore. (F*ck context.) Timothy dropped by the Archis office to deliver the article in person while in Amsterdam to research his PhD on ‘The Instruments of Transitional Architecture’.

“Archis is totally out of control again. This was my initial but restrained expletive upon receiving the news that Archis was changing its publication title to Volume in 2005. I was used to the wayward nature of Archis. It was the hysterically designed Archis issues (by Maureen Mooren and Daniel van der Velden) that made me take notice of the magazine on the newsstands of Melbourne, Australia. And it was the reformation of the publication as Volume that once again made me sit up and pay attention. It had a bold polemic, to go beyond architecture, which had the hallmark chutzpah of Ole Bouman all over it. But this time the magazine came in an A3 clear plastic sushi box with several different publications as a zine-like combo meal without many actual reviews of buildings. I think this was the final straw for Dutch architects. Subscriptions plummeted. But who cared at Archis/Volume? This was beyond architecture, bro.

I came across Volume #5 holed up in Rotterdam’s library, designed by Bakema and Weeber, one day. I had been seduced by the superdutch and traveled to TU Delft to study in hope that some of this second golden age would rub off on me. I realized I had missed the “second modernity” but somehow Volume’s new direction was so much better – even if unhinged at times.

Volume #5 stands out as a highlight of this new dawn with the entire issue being dedicated to The Architecture of Power (Part 1). It is a visual head-bang of jpegs and click-bait, with pages dedicated to image feeds of powerful people, power suits, power poses and powerful necks. I can only imagine the delight the team had (which included the seriously cheeky Todd Reisz, who would later edit the serious Al Manakh) putting this relational search together.

Along with the main issue, there was a product brochure advertisement (probably the last) and a booklet entitled From the State as Client to the Client State where Ole Bouman writes on ‘The rise and fall of superdutch’. Not only were we saying goodbye to Archis as we knew it, we were also saying goodbye to the superdutch. And were also saying goodbye to the written word as visual content moved to the fore. One article cannot be highlighted from Volume #5 as each only works in relation to the rest of the issue. But one that made me laugh brutally was ‘Power Seating’. Only the Dutch could get away with such blunt attention to the architectural element, which would emerge again as a theme with Volume protagonist Rem Koolhaas at the 2014 Venice Biennale.” 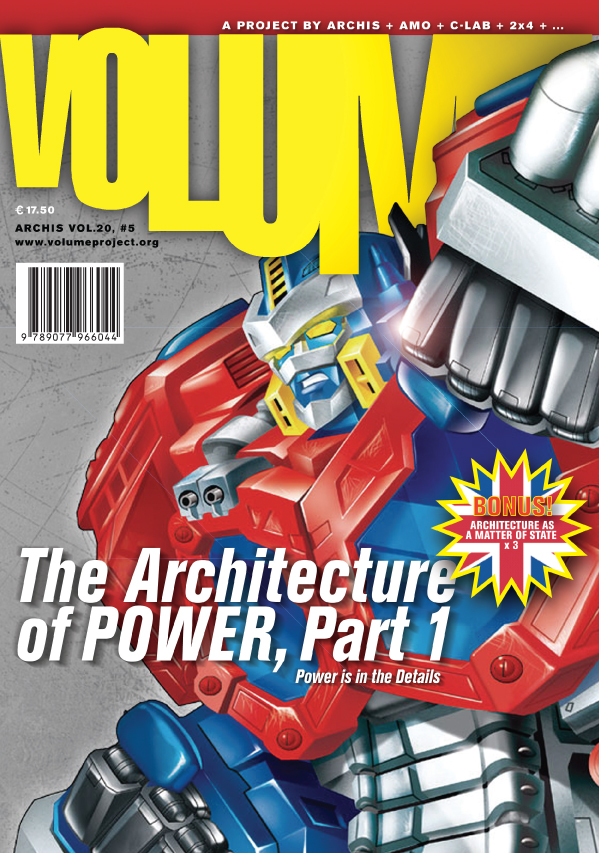 Power is all about the chair. To exercise power you need a chair.
You can keep it, give it up, or take one from someone else. Chairs are always working.
The ultimate sign of power is to rarely sit in your chair.
Real power is the ability to organize the chairs of others.