The Images of History 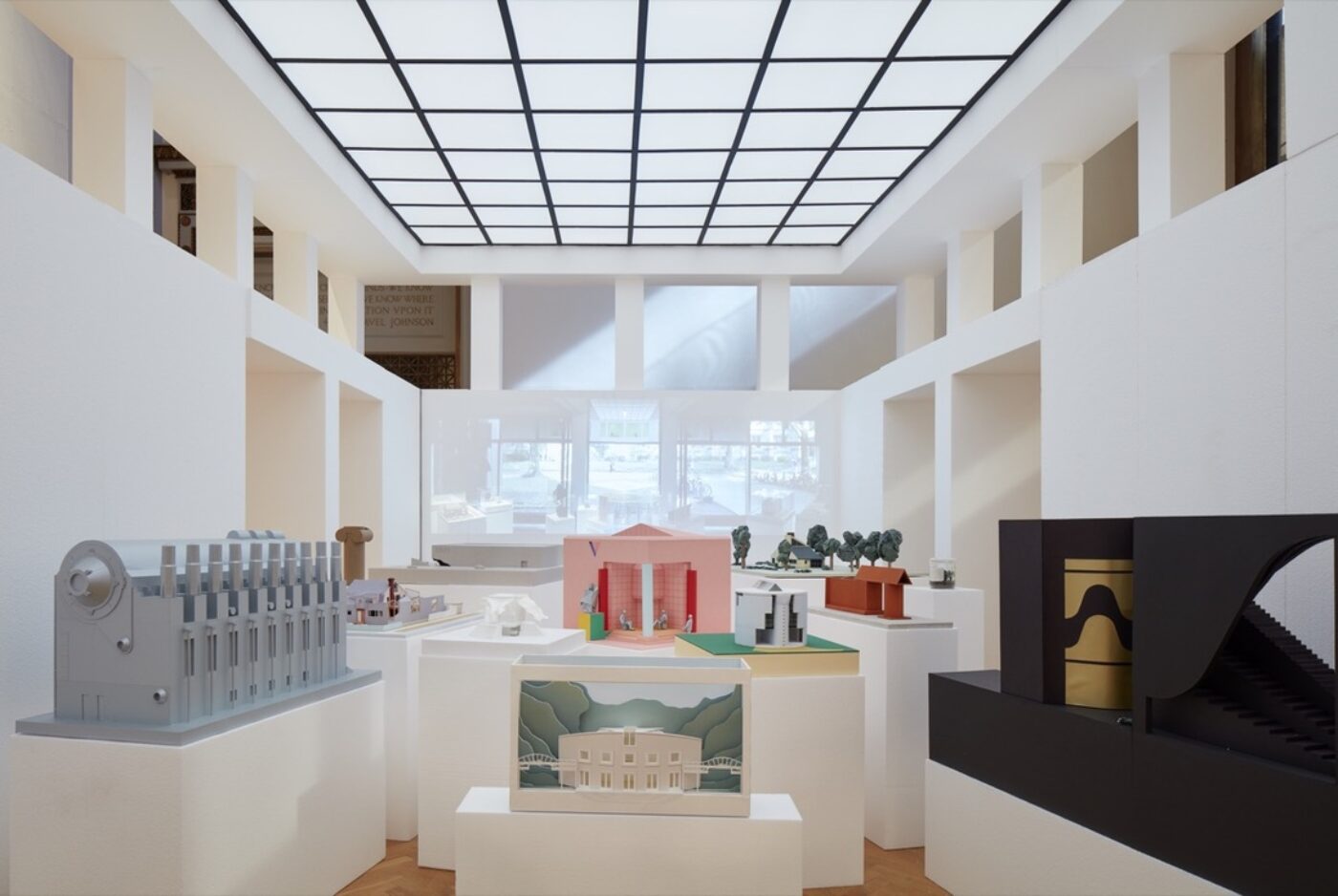 If history is always written by the winners, then the exhortation to “make new history” means that there are battles to be fought and won for new histories to be written. The second edition of the Chicago Architectural Biennial, titled ‘Make New History’, borrowed its mantra-like title from Ed Ruscha and opened last week at the Chicago Cultural Center and venues across the city. Searching through the main exhibition, which showcases 141 artists, architects, and collaborations in the center’s grand neoclassical spaces, you might be left wondering where in fact the conflict lies.

The main exhibition is more or less an enormous group show. Artfully assembled, the atmosphere is agreeable and genteel; this is not an exhibition intended to shock or provoke. Among the panoply of models, films, images, furniture, and dioramas is a stable field of difference and novelty with little friction around its edges. Everything is beautifully made, all of it evinces varying degrees of thoughtfulness, and everyone plays together nicely. It’s an embarrassment of riches, if almost boring.

But this shouldn’t disparage what is self-evident: The Chicago Architecture Biennial is the most ambitious exhibition of contemporary architecture in the United States in recent years. Sharon Johnston and Mark Lee, the festival’s artistic directors and partners in the Los Angeles-based architecture firm Johnston Marklee, have deftly produced a showcase of contemporary work of the highest caliber. The two have even avoided making enemies out of old friends, as Lee remarked alongside Johnston in their opening address. This biennial is unambiguously a success.

And yet this show raises more questions than it settles. The biennial, in particular the main exhibition, does not slouch toward a unified theory of everything. It should not be read as a map of the field in this moment, but perhaps more like a tendentious complement to everything it leaves out of the picture, something more akin to a portrait. Like any good portrait, this biennial takes certain liberties of representation. The most pressing issue might just be who and what is being excluded.

‘Make New History’ is thoroughly generational. Much of its energy derives from the preponderance of young architects and artists represented, many of whom are having their most significant showing to date. This moment captures a generation still in formation, just now coming of age: a decade or less out of school, or having since returned to teach. Most of these architects are wrestling with similar questions of history, impelled by the prompting of the curators and motivated by the fundamental ethos of a generation that was raised on the Internet, has lived its consequences, and now sets out to find historical traction in a milieu of acute presentness.

The science fiction writer William Gibson coined the term atemporality to refer to the status of historical knowledge in what he calls the “endless digital now”. His argument goes that informational abundance and simultaneity prompt cultural modes of information processing that are fundamentally different from those of previous eras: How do you understand history when your access to historical knowledge is reconfigured in the terms set by Google search? History cannot be treated as distant; historical information already exists side by side with the newest images and data floating in the infosphere. Distinct informational tactics emerge in atemporality. Irony, nostalgia, and critique are reconfigured in turn; reference is no longer necessarily tethered to the affirmation or negation of the real, an original, or an authority. Instead, reference reproduces an atemporal informational modernity, a web of citation whose object is the present, not the past. This biennial affords a view of architects looting the trove of history.

Referents of postmodern architecture abound here. Many of the architects seem to have landed in the 1970s and ’80s, with some reaching further back and some others keeping closer in. But the historical sensibility on display is neither simple re-enactment nor reverence paid to postmodern irony or pastiche. This is not postmodernism again. More fundamentally, we see signals of contemporary architecture’s image culture beginning to reflect upon itself. For many architects, working with history means selecting from an infinite stock of available images: partial references, details, bits and pieces. These same architects are now addressing the image, without deference to, nor any connection with, the so-called real. They are experimentally inhabiting the mise en abyme of architecture’s image culture: pictures passed around on Instagram, posted to blogs and websites, displayed in lectures, found in books and circulated in emails and text messages have seemingly become materials to build with. Much work at the biennial seems to collapse with its source material. Indeed, the most astute projects articulate how the image has recently begun to rematerialize in today’s architecture. A few standout exhibitors have devised nimble strategies to engage with history – or, to be more precise, to engage with the images of history.

Sylvia Lavin’s installation ‘Super Models’ leads us back squarely into the realm of simulacra and simulation. Produced by Besler & Sons, LLC and Norman Kelley with Jessica Colangelo, the installation stages copies of selections from the architectural model collection of historian Heinrich Klotz. The newly made models sit within a re-creation of the central pavilion of Frankfurt’s Deutsches Architekturmuseum, which Klotz founded in 1979. The interior, designed by O.M. Ungers, is here constructed with rigid foam. But the display in Chicago is only one-half of the exhibition, which mirrors an ensemble of Klotz’s models on display at Princeton University; the two spaces are connected by live video. Both stagings replicate an exhibition that in fact never existed – they reconstruct a 1984 promotional photograph of Klotz’s model collection within the Ungers-designed gallery.

In another room, Bureau Spectacular, led by Jimenez Lai and Joanna Grant, reimagines the scopic regime of Adolf Loos’s Villa Müller, an aspect of the Austrian architect’s Raumplan paradigm first analyzed by historian Beatriz Colomina. Bureau Spectacular has represented Loos’s design as a diorama of the main salon and interior spaces, but modeled with severe anamorphic distortion. At one end of this object – whose exterior is clad in white fur that recalls the fur-lined bedroom Loos designed for his wife, Lina, in 1903 – you can behold the canonical image of the interior from its entryway. At the other end, you can spy downstairs by poking your head into the model.

In the same space, ‘Josephine, Strawberry, and Wilson’, by First Office, a firm led by Andrew Atwood and Anna Neimark, displays the Great Hall of La Vedette, the architect Viollet-le-Duc’s final home. The display is a pair of models shown side by side. One recreates the hall in foam board overlaid with careful, printed drawings of the historic room’s alpine murals; the other has transformed the room’s walls into architectonic forms evocative of those mountains’ jagged peaks, a trio whose names might be Josephine, Strawberry, and Wilson.

Downstairs, T+E+A+M, a collaborative of Thom Moran, Ellie Abrons, Adam Fure, and Meredith Miller, presents ‘Ghostbox’, a stunning, intricate model that recalls an amalgam of James Wines/SITE’s big-box showrooms for BEST from 1972-84 – here reinterpreted for other uses. One of Wines’s showrooms, the so-called ‘Notch’ building, is displayed in Lavin’s ‘Super Models’ exhibit. Intriguingly, the connection to SITE is suppressed: The word ‘TEAM’ has replaced BEST on the showroom façade, and the model’s accompanying text makes no mention of the well known showrooms. It is a referent that seemingly dares not speak its name. The ambiguous coding of ‘Ghostbox’, dominated by the presence of a precedent that goes unacknowledged, is a significant marker of a new attitude toward historical material. It is somewhat blasé. It almost rejects the referential inside-jokery so central to historicist pastiche. We are all aware of the referent, and even if you’re not, it doesn’t matter because the architecture stays so close to its sources.

Both the strengths and weaknesses of the sophomore Chicago Architecture Biennial ultimately stem from the way its focus has been carefully circumscribed. On the one hand, this provides an occasion for some much-needed, hyper-focused navel gazing; on the other, it is seemingly a rejection of the social project of architecture foregrounded, for example, in Alejandro Aravena’s 2016 Venice Biennale, ‘Reporting From the Front’. At the very least, ‘Make New History’ is a chance to huddle when everything outside seems to melt into air.

But we leave Chicago with some important questions unanswered. For one, the subdued politics of this biennial offers little clue of what is at stake in a renewed focus on history. If, as postmodern critics thought, the politics of postmodern architecture are coincident with the values of corporate America, will architecture stay close to its source material, or close to its sponsors? In this biennial, which was funded by the petroleum conglomerate BP, it’s worth asking whether architects even have a choice. Is this biennial the opening salvo of an impending intergenerational conflict, a new querelle des Anciens et des Modernes that will be fought over the politics of images? Or is it the first round of an argument to take place among members of a cohort waiting for a name? Is this the coalescence of the field or a bifurcation, a return to the center or a branching outward? Architecture can’t ever escape its past, surely, but Ruscha’s dare compels architects to confront a pressing question: Where do we go from now?

Phillip Denny is a PhD student at Harvard University (www.phillipdenny.com).