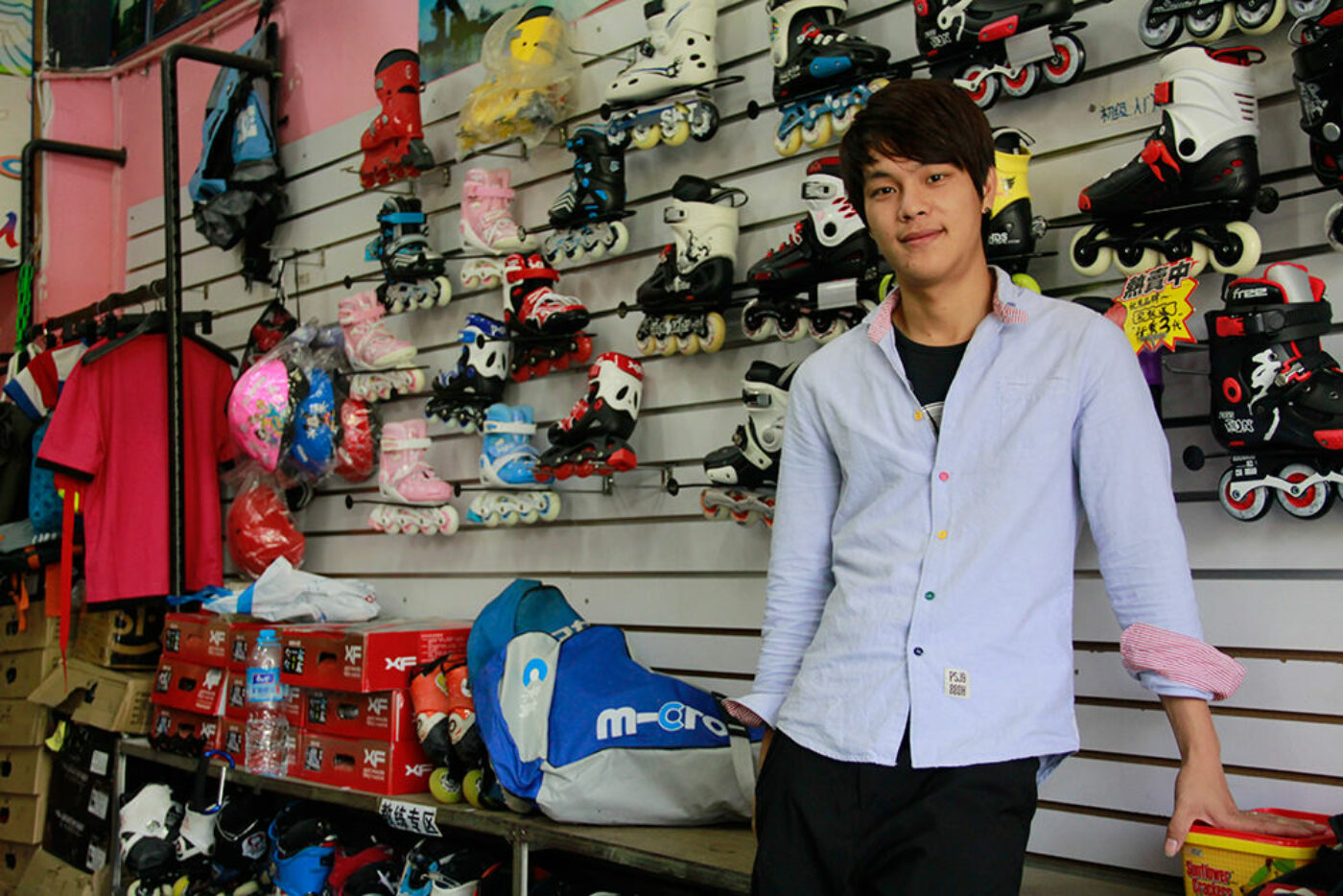 Shenzhen is currently upgrading its industry; this results in empty factory buildings and huge demographic changes within the migrant population. It also implies a transition from a blue-collar to a white-collar society. Shenzhen’s economic success is based on cheap labor. Nonetheless, blue-collar migrants are considered to be both problematic and vulnerable. But do we really understand and appreciate the economic and social value of the current generation of migrants in Shenzhen? ‘Da Lang Fever’ is a story about the potential of a self-organizing migrant society in the neighborhood Da Lang. It showcases the empowering nature of bottom-up activities for migrant workers.

Da Lang is a migrant neighborhood of 500,000 people located in Longhua New District just outside the border of the former Special Economic Zone. Da Lang became an official sub-district of Longhua in 2011. It had grown randomly and now consists mainly of urban villages and factories. Like many other districts in Shenzhen, Da Lang wants to upgrade and modernize its manufacturing industry and urban infrastructure. Da Lang Fashion Valley, an area in the north of Da Lang, represents one attempt to attract creative industries, while simultaneous road-widening projects are literally ‘opening up’ Da Lang. Despite all efforts, Da Lang still faces the absence of a cultural life for workers and a serious lack of public facilities.

Leisure patterns are rapidly changing in China. The demands of second-generation migrants are markedly different from the previous generation – most of whom have returned to their hometowns: they come to the city to make money, but also to develop themselves, learn new skills and find better jobs. More than fifty percent of the migrants in Da Lang are between 20 and 29 years old. Born after 1980, they belong to the second generation of migrants in China. In Da Lang only 8,200 people are officially registered, which means that 491,800 of these migrants belong to the floating population; almost half of the population arrived unaccompanied in Da Lang less then one year ago and roughly twenty-five percent stay between four to five years.

The Da Lang government wants to create a more sustainable society by facilitating educational programs and leisure activities. To accomplish this, the Department of Cultural Affairs has been installing a cultural infrastructure over the past couple of years for volunteer organizations and individuals. They subsidize a community service center with seventeen full-time workers that support five volunteer teams who are responsible for education and leisure activities. Xia Donghai was the leader of one of these teams named Little Grass. In just a few years, Xia extended the group of volunteers from several people in 2007 to a current membership of more than 3,000. The volunteers organize different kinds of activities: they give directions in the metro, help elderly people, but also organize dancing and dumpling parties. The Da Lang government is currently renovating the run-down Qian Zhen Girls’ School (1891) for educational purposes. It has also organized the ‘Da Lang Star’ singing competition since 2010. The competition provides a stage for talented young people and music fans. In the past four years, more then 2,000 migrants have participated in the competition. The event is hugely popular in the district and many people gather for the 39 qualifying rounds and yearly finale with twelve participants. Local enterprises sponsor the event.

Labor Square, built in 2007 as an entertainment area for the local inhabitants, plays a crucial role in these activities. There are several parks and other squares in Da Lang, but Labor Square is by far the biggest and most popular. Little Grass has its information station on this square and the annual singing competition also takes place here. A large television screen displays news and television series. Public space is a relatively new urban concept in China simply because it was never part of the traditional Chinese city; public space only consisted of streets and their immediate surroundings. After the establishment of the People’s Republic of China in 1949, the number of parks and squares grew, but it was only after the opening up of the country in 1979 that public space became important. In today’s rapidly changing Chinese society, in which leisure, shopping, and sport are becoming more and more important, it’s logical that new needs are also being created in the public domain. However, public space is increasingly fragmented as a result of the rapid process of urbanization. Clear distinctions can be made between political public space and commercial public space. In the former case, it’s a question of enormous squares that were not designed as places to linger. Commercial public space consists of shopping centers, restaurants, and cafés. A large part of the population is immediately prevented from using these, for the simple reason that they cannot afford it. Undoubtedly, Labor Square fulfills another role since it truly functions as a meeting place and the vibrant heart of the district –mainly because most people in Da Lang spend their leisure time outside their dormitories and shared apartments to escape from the crowdedness and noise.

Every weekend and on nice summer evenings, hundreds of people visit the square to skate, dance and sing; others just relax and watch. Lin Fangxi (31) and Zheng Baojie (23) own a music store and a roller-skating store nearby. Lin graduated from the Technical University of Hunan with a bachelor’s degree in music education. He arrived in Shenzhen five years ago and first worked as a school music teacher in Da Lang. Lin started his own music store, ‘Star’, two years ago and has been teaching ever since. He also organizes events and cultural performances. Zheng has owned the ‘Excellent’ roller-skating shop in Da Lang since 2008. He also provides lessons and organizes different kinds of activities with his Excellent roller-skating team, like competitions and tours through the city. Excellent now has over a 1,000 members. Each month, members of the skating club cooperate with the volunteers of Little Grass to clean the Labor Square and help elderly people. Lin and Zheng play a fundamental role in organizing leisure activities in the square. They use their shops as bases for all kinds of activities. There is a close relationship with the local volunteers, but they operate independently. They offer a large social network through meetings, performances and competitions. They also educate residents by providing lessons. It enables the second generation of migrants to meet new people, extend their limited social networks, broaden their work opportunities, improve their communication skills, gain self-confidence, and, last but not least, to have fun. 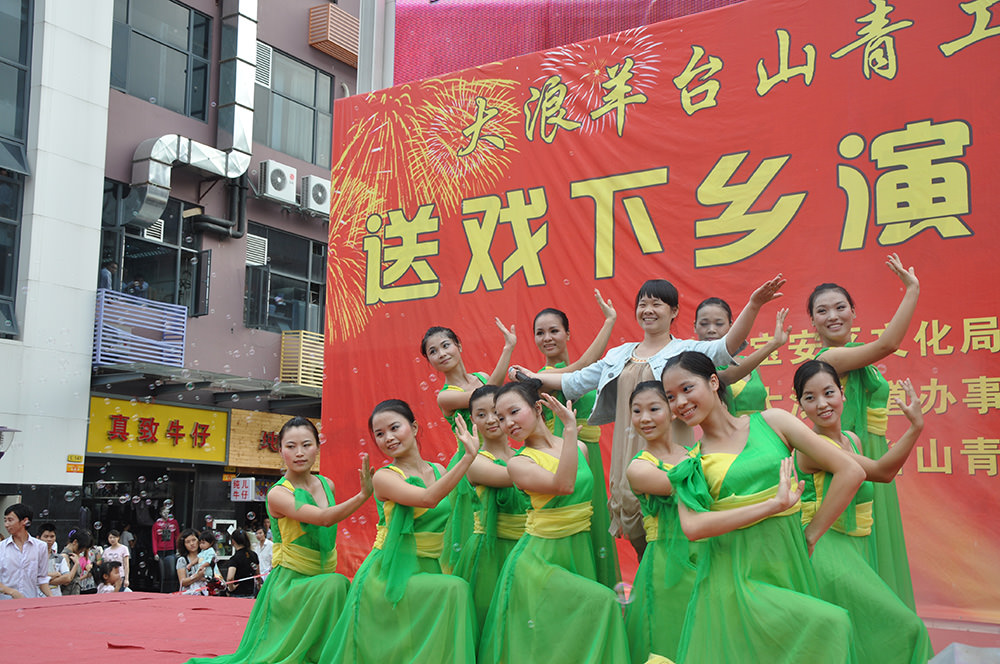 Bottom-up activities are flourishing in Da Lang due to its open and dynamic culture. What circumstances are shaping these achievements? We can distinguish three important conditions that are often considered to be very problematic in Shenzhen: a floating population, a very young society, and a distant, but facilitating government. Shenzhen still implements a top-down urban strategy and consistently neglects and underestimates the current social capital. Shenzhen simply puts new hardware in place – infrastructure, buildings, and industries – in order to establish urban and therefore economic growth. It hardly touches upon the question of which existing social dynamics need to be accepted or improved in order to strengthen the city’s potential, let alone the socio-economic conditions that are necessary to successfully regenerate an existing neighborhood or to establish a new low-carbon city or creative park. However the encouraging and therefore emancipating attitude of the local government towards second-generation migrants establishes new values that move beyond economic benefit alone: temporality and flexibility are considered to be valuable starting points and intrinsic to the current status of Da Lang as an intermediate stage. In Da Lang, stepping-stones are put in place for volunteer organizations and individuals to start empowering themselves and others. This triggers further self-organization in which young entrepreneurs play a leading role.

In answering the question, ‘could the growing number of vacant industrial buildings in Shenzhen play a role in providing urgently needed public facilities like the Labor Square’, only one response seems suitable: It can, as long as the conditions for self-organization and empowerment are being cherished and facilitated. This will ultimately be the guiding principle for future recommendations and design proposals in Da Lang.

‘Da Lang Fever’ is curated by Linda Vlassenrood (International New Town Institute) in collaboration with the Da Lang Government. Da Lang Fever is the result of research initiated by INTI as part of the international research program ‘New New Towns: Why we need to rethink the city of tomorrow today’.