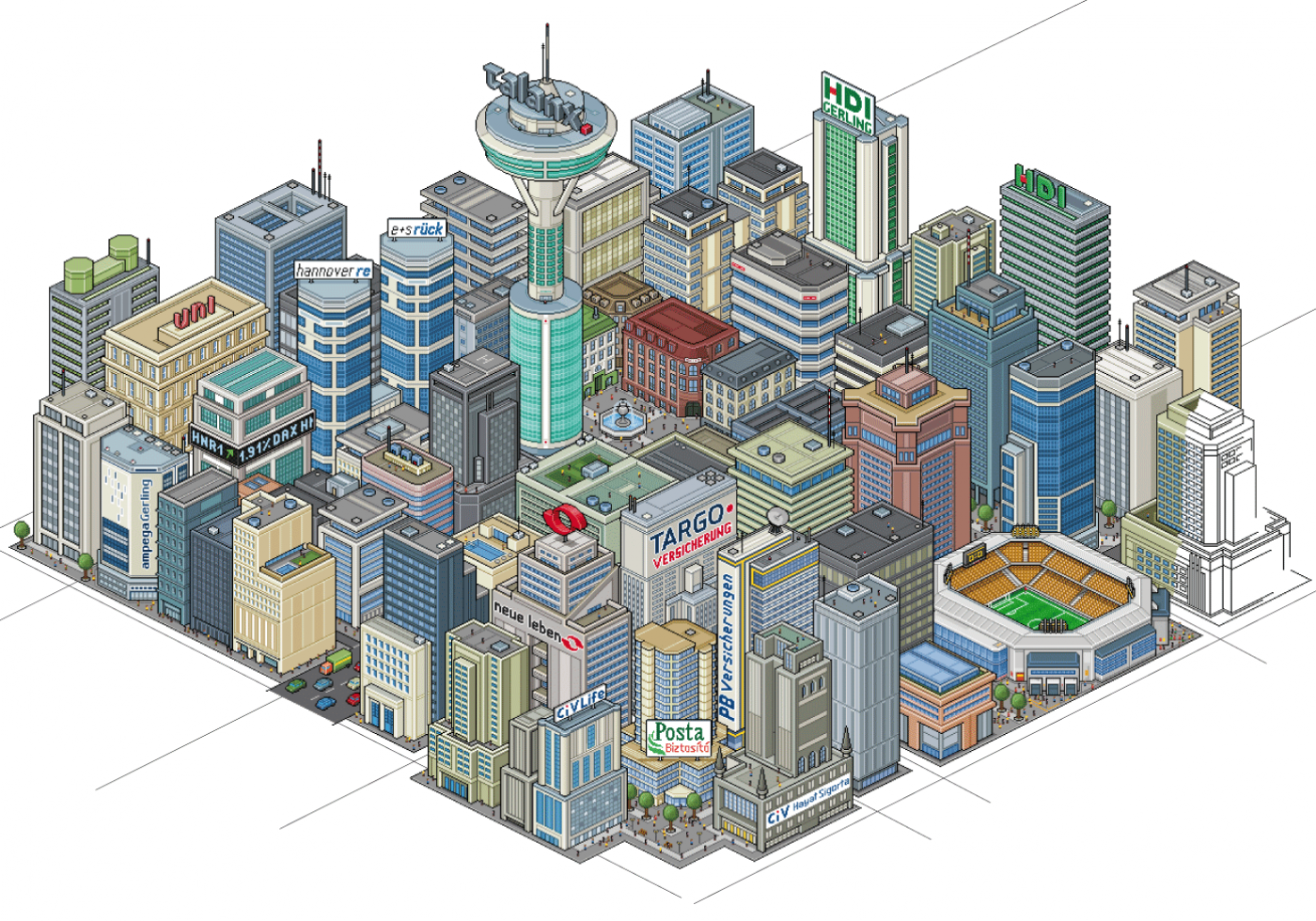 The welfare state was pretty great while it lasted, wasn’t it? Yeah, those were the days, golden, even. But now, sad to say yet no point to lament times have changed; things are different. Planning used to be the way society would stay on track and moving forward. Today, for better or worse, we have the market. There are reasons why the market came to take the place of the state, but the real question is, now that we have it, how can we make the market work for us?

Neoliberal post-fordism poses a dramatic challenge to urbanism as we have come to know it since the early 20th century. The public planning process has become more and more an embarrassment and obstacle to urban and economic flourishing. It’s a relic of a bygone era. The high point of urban planning was the post-war era of socialist planning and re-construction of the built environment. With respect to this period we can speak about physical or perhaps ‘positive planning’, in the sense of governments formulating concrete plans and designs about what to build. This era has long gone as society evolved beyond the simple fordist society of mechanical mass production to our current post-fordist networked society. When a few basic standards were functionally separate, optimized and endlessly repeated, central planning could still cope with the pace of societal progress. The world we live in today is far too multi-faceted, complex and dynamic to be entrusted to a central planning agency. The old model broke apart as it could not handle the level of complexity we live with and our cities should accommodate. The decentralized information processing mechanism of the market was indeed capable of managing such levels of complexity and, for this reason, has effectively taken over all positive decision-making processes.

Alongside the dramatic contraction of public investment in construction, public planning was reduced to setting constraints; it became ‘negative planning’ via restrictions and veto powers without any power to make any real positive decisions. Zoning restrictions can be imposed, for example, and then planners wait and see if investments from the private realm come forward. It’s possible that no investments come, which could be a politically intended result (nimbyism), or prompt the adjustment of planning constraints. In theory, such a trial and error process might allow planners to find a set of restrictions that attracts certain investments while avoiding others considered undesirable. However, the present state of public planning is too slow to adapt and prevents the exploitation of myriads of opportunities. Development processes based on negative planning are inherently conservative compared to an unhampered market-driven process of land use allocation. Even worse is when planners assume discretionary powers rather than operating via strict rules due to the paralyzing uncertainty this creates. Indeed, to give permission is often riskier than to refuse it. Another mounting problem is that any rule change creates problematic windfalls and losses. In short, the public planning process turns the process of urban development into a precarious gamble and makes the power of officials liable to be treated as fiefdoms for the extraction of bribes – an endemic problem (not only) in the developing world.

We are witnessing a sustained drive towards urban concentration in global hub cities like London. Within our contemporary networked society, one’s productivity depends on being plugged into professional and cultural networks. In the provinces, productivity is constrained by relative disconnection. Productivity gains depend on continuously re-calibrating what each of us is doing in response to what everybody else is doing. This requires a new level of communicative density that is only available in the metropolis and underlies what economists measure as ‘agglomeration externalities’.[1]

Since the neat division between work and leisure has disappeared, a spell of desire has been cast for unprecedented degrees of urban intensification and mixture. It’s my contention that present-day market-driven processes of urbanization, if unleashed and harnessed, could deliver exactly this. This desire for a new urban dynamic is currently stifled by outmoded planning restrictions and requires new degrees of freedom. Urban entrepreneurs need space to experiment with and discover optimal ways of garnering potential synergies through intricate programmatic juxtapositions and weaving a new urban texture. With its information processing capacity and agility, only an unhampered market process can facilitate such a dynamic mechanism of creative experimentation and discovery. Planning brakes have to be released in terms of land use and density restrictions. Urban development has to escape from the paralyzing politics of nannyism and nimbyism.

Rules are of course required, but should be as general and abstract as possible. The maximization of value we might be able to expect from urban planning could be better and more flexibly provided by a combination of universalized property rights (unencumbered rights of land use or programming, rights of light, rights of access, generic protection from noise, pollution etc.) and free markets for their exchange. Private property rights are abstract enough to remain open to yet unforeseen future possibilities while being stable enough to allow for entrepreneurial planning. The idea of a competitive, market-based privatization (and commodification) of everything – from public spaces, streets and city management to policing, courts and systems of law – is not only intellectually stimulating but also, in fact, increasingly plausible. We should recognize that the tendency for consolidating land ownership into large integrated development parcels or even whole urban districts is already well under way for the purposes of long-term coordination and collective action. A free market of space will also generate vibrant urban districts in a bottom-up fashion by letting small entrepreneurs experiment with and discover the vital ingredients and synergies of pedestrian-scaled juxtapositions. There would be development at all scales and sizes, ranging from large development zones to infill slivers.

The prospect of a market-based urban order does not spell the demise of planning, but rather points to its progressive transformation. Traditional public planners are shielded from adverse economic effects of their decisions and not exposed to profit and loss signals that would incentivize them to continuously check and fine-tune the relative optimality of space; that space is allocated to its most productive and most urgently desired use. Private planning agencies can be imagined with a vital incentive to get urban synergies right – within and between districts of varying scales – and who are inherently more agile and adaptive to new trends.

In the absence of exposure to risk and incentive to respond to such feedback, planners can persist in their misallocations and misaligned restrictions. Current sky-high land prices in London reflect artificial supply and density restrictions as much as they reflect the vital historical tendency of urban concentration within major global communication hubs. The extraordinary price differentials between land parcels zoned for residential use versus those for commercial use – in certain areas residential is four-times that of commercial – also reflects the long persistence of artificial zoning restrictions. An unhampered land market would differentiate between locations on the basis of centrality, but not between land uses. Adjacent parcels would cost the same, independent of their use. The artificially heightened price differential in residential land puts an increased cost burden on the desire to live in the city. What gives planners the right to frustrate the realization of this desire? Planners also restrict the choices of those who want to live in the center by setting arbitrary minimum standards for apartments in terms of size and facilities. This normalizing bureaucratic paternalism compromises the quality of life and productivity of those who have desire and reason to trade centrality for size of accommodation.

Planners talk about ‘social justice’ and ‘milieu protection’, but this is pure conservatism. What gives planners the right to limit desired choices and impose that urban uses of far less value should remain entrenched in places where others are much more urgently desired? What is ‘just’ in protecting the monopoly position of those who happen to be the lucky owners of land already zoned for residential use? ‘Gentrification’ is supposedly a morally suspect process, but it’s really just another name for development: urban upgrading, urban intensification and enhanced land utilization. Resistance here is not different from any other resistance to progress; it’s like the Luddite smashing of machines, and planners have come to wield the tool of such rearguard action. Moribund planning deserves its long overdue coup de grâce.