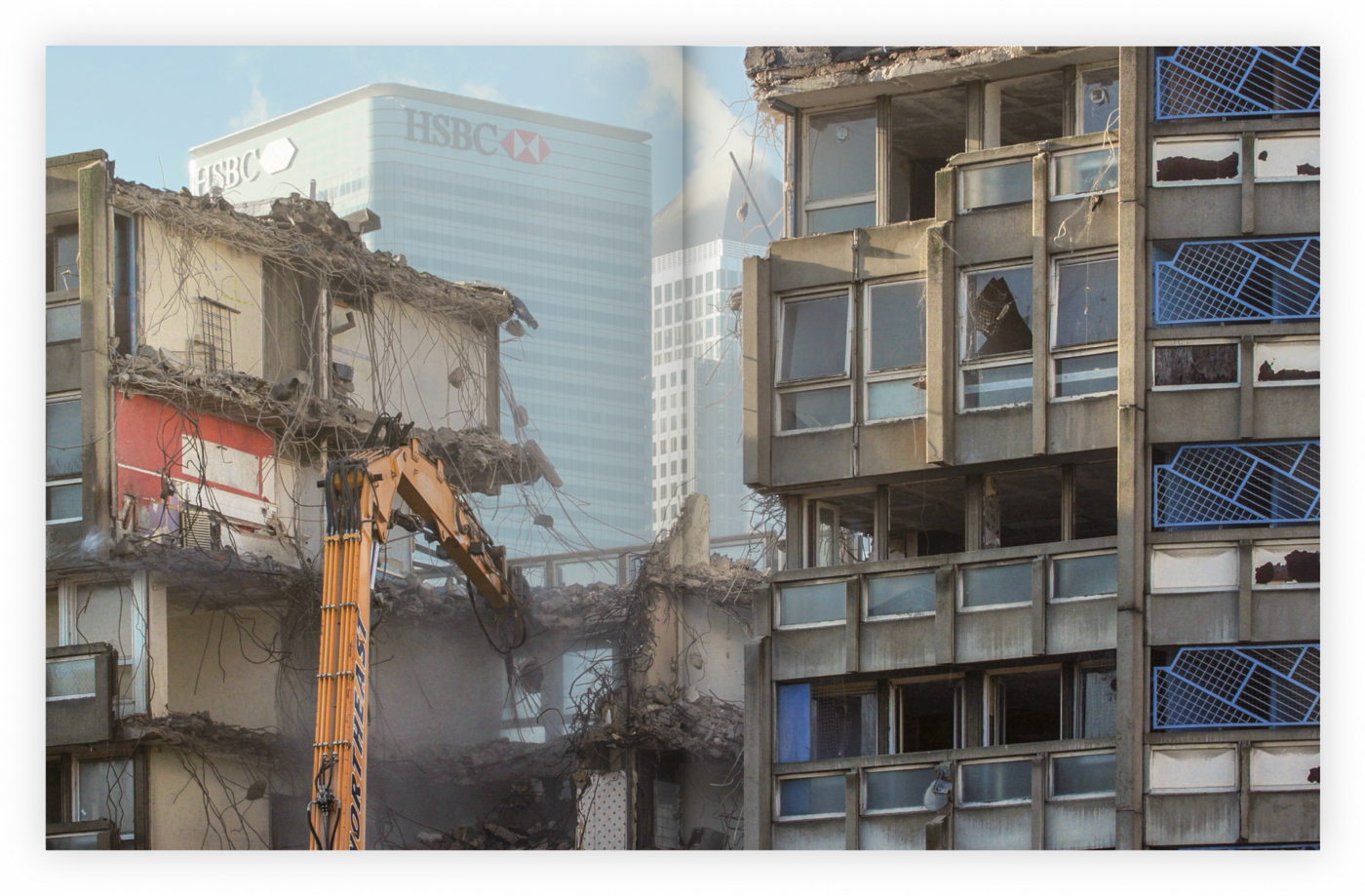 The last contribution of The Writings on the Wall is an edited version of the editorial of ARCH+: The Property Issue, curated by Arno Brandlhuber and Olaf Grawert and based on the content of the film Legislating Architecture — The Property Drama, made in collaboration with Christopher Roth. The text reflects on the political agency that architects can have today: starting from the often neglected questions, “Who owns the land? Who regulates it?” the authors propose a shift from “architecture” to “architecting” as an action outside the construction of buildings, thus capable of addressing a broader set of concerns.

“Philosophers have only interpreted the world in various ways; but what matters is to transform it.” That is how the famous eleventh thesis on Feuerbach by Karl Marx has been widely quoted. Actually, it was Friedrich Engels who subsequently smuggled the “but” into Marx’s formula, thus positioning transformation in contrast to interpretation and reflection.

Only this juxtaposition gave the thesis an apparent clarity through mutual exclusion—the powerless abstraction on the one hand, the revolutionary agency on the other. This example shows how deceptive the contrast between theory and practice can be. Wasn’t that “Summer of Theory”,1 which was inseparable from the student movement, ultimately more effective than its revolutionary performance?

When working on the topic in 2018, besides Karl Marx’s 200th birthday and 1968, another date to commemorate was the 80th anniversary of the death of Bruno Taut—a man of action who built vast public housing estates in Berlin. Perhaps Taut was also sceptical of the supposed contrast between theory and practice when he summarily reversed the Feuerbach thesis, shortly before he died in Turkish exile in 1938, and stated: “To interpret the world means to transform it.” In short: only by changing our mindset we can change the world. It’s a revolutionary idea in a profession that places so much emphasis on its qualities as “makers”. And it reflects the core question of the issue around property: What agency does architecture still have in times when some yearn for some form of anarcho-capitalism? Thus, the effects of juxtaposition (and overcoming its tendencies of mutual exclusion) are employed also in Architecting after Politics by using Carl Gustav Jung’s and Wolfgang Pauli’s quaternation theory. What becomes visible in a series of experts, cases and projects is that architecting is a verb rarely connected to being trained as an architect in theory or practice– but being an architect directly comes with a call to architect in the broad spectrum of those contrary concepts.

The question “Who owns the land?” is of crucial importance for all societies and their coexistence. Those with access to land control the production of space and the social order. Yet architects rarely explicitly address the question of landownership. Is this because, as Florian Hertweck writes: “architects primarily produce an illusion of the political—not least because they want to see their projects realized”?2

The fact that land is as necessary to life as air and water means its use should not be subjected to the glaring folly of free forces and individual will. History narrates a multitude of attempts to find a solution to this problem: ranging from Henry George’s push for a single tax, the reform efforts of Adolf Damaschke and Silvio Gesell during the Weimar Republic, and the social commitment enshrined in the german Grundgesetz—“property entails obligations”—to the legislative engagement of German politician Hans-Jochen Vogel, a social democrat, to impose a levy on land gains that are earned without any effort on the owner’s part. Still, the main question remained: How to prevent the rich few from being the only ones to profit from common resources?3

In this context, the Right to the City movement can be seen as a confrontation with the enclosure of the commons, which echoes the measures taken in England from the seventeenth to the nineteenth century to enclose or privatize large amounts of once collectively cultivated land. Smallholder farmers were expropriated and lost their livelihoods, while large landowners took more and more land under their control. For Karl Marx, this “primitive accumulation” was the historical impetus that fired up the engine of capitalism. The violent expropriation of large swathes of the rural population also left them with no other option but to sell their labor as proletarians—an important prerequisite for the Industrial Revolution in England.

“Capitalist accumulation is therefore based on the production of space—that is, on shifting the control of land use and the (loosely understood) architectural act of enclosing land with hedges and fences”,4 writes Harald Trapp. Still, the process of enclosure is never-ending and has intensified under the conditions of finance capitalism. Developments associated with the financial crisis, from the direct form of foreclosures to the socialization of the losses by big capital, find their parallels in the historical enclosures: just as they once started the engine of capitalism, the mantra of privatization has been the driving force behind neoliberalism since the 1970s. Yet the coupling of property with finance is not an invention of neoliberalism. Wolfgang Scheppe makes it clear that this has long been an ugly reality of the city: taking Venice as an example to dispel the thesis that the financialization of the city is a recent evil: as the space available was limited and the concentration of consumers extraordinarily high, it was the small number of aristocratic families who divided up the city among themselves and by that became the real creators of the city.

That Venice today has become practically uninhabitable for the average citizen, Scheppe attributes to a radical change that occurred despite historical continuity. While landowners previously depended on the population for ground rent, the reverse is now true in the attractive tourist centers: local residents are standing in the way of those who seek to exploit the land. Housing, which is unprofitable because of the space it occupies, cannot rival the revenues from tourism and the art scene. The commercialization of the city drives out the original residents, who underperform in the global competition for the resource of space.

What can we do? Not much, because there is no alternative but to politicize land. A lot, because everyone else has failed to do so until now. Yet there is no avoiding comprehensive reform if we want to define the city as a commons for all. It starts by changing our mindset, by denaturalizing land with the help of a philosophy of land. This means strengthening our understanding that land is always a cultural, social, and therefore a political product.5 And we must arm ourselves against the arguments of those who propagate the dogma of privatization.

For example, many apologists of private landownership invoke John Locke who justified private property under natural law based on an individual’s personal investment of labor. This line of argument offers a point of attack since by linking the claim to ownership with labor, Locke also links economics with political theory.

Another realm whose order has always been presented as natural is the domestic sphere. While Karl Marx did provide a profound theory for the capitalist, industrial mode of production in his Critique of Political Economy, he ignored reproductive labor, which includes all activities in the domestic sphere such as raising children, care, cooking, cleaning, and house-keeping, which to this day fall outside of the economic equation— still largely at the expense of women and marginalized bodies. This blind spot can, with the help of feminist theory, become a genuinely political place where the transformation of social conventions and gender hierarchies materialize. Ultimately, the question of land ownership cannot be discussed without mentioning the question of housing—the two are closely intertwined.

And there surely are alternatives to the land laws regulating the relationship between people and the land on which they live. Therefore, a central focus has to be made on the empowerment of people, who form new networks of solidarity to defend existing universal rights while simultaneously negotiating new ones. Here we have to broaden our perspective to take the context of global capitalism into account. The territorial subjugation that occurred around the world during colonialism persists today, under the term land grabbing, as a means of capitalist accumulation.6 In fact, our legal system is designed in favor of financial capital, which has long since abandoned the concept of the national state and enjoys a mobility that people can only dream of.

Despite financialization, digitization, and virtualization, space does not disappear from the equation. Global technology companies such as Google, Microsoft, Airbnb, and Uber are no longer satisfied with the commercialization of all of our social actions. They are investing their stock market profits in buildings and land. And following their respective business logic, they have also started planning the cities of the future. In projects like Sidewalk Toronto by Sidewalk Labs, part of the Google holding company Alphabet, residents are tapped as a data source, which artificial intelligence uses to regulate the distribution of space. Can the instruments of platform capitalism be used for positive ends, as Trebor Scholz proposes with his concept of platform cooperativism?7

Toward a practice of the commons

What instruments are available to use and manage land as a commons? In the first step, gains from the sale of building land and real estate speculation can be limited or skimmed off for the community, for instance on the basis of new tax mechanisms. Established models such as land funds and foundations, community land trusts, and leaseholds are also available. Over the long term, principles of the social economy must form the basis of the urban economy. The instruments of change are available, but as Manuel Shvartzberg Carrió points out, the first step is “a radical reinterpretation of what change means and the radical democratization of those processes with which change is implemented.” In short: what matters is to change our mindset.

b+ is a collaborative architecture practice that brings together different actors (from theory to practice) with different formats (from buildings to campaigns, exhibitions, texts and films). This text, by Arno Brandlhuber, Olaf Grawert (b+) and Anh-Linh Ngo (ARCH+), is a re-edited reprint of the editorial of ARCH+ Issue 231: The Property Issue. Ground Control and the Commons.

The Writings on the Wall is an editorial project developed in collaboration by Volume and Beta – Timișoara Architecture Biennial, about the capacity of loopholes to create exceptional experiences among the laws that produce our urban spaces.