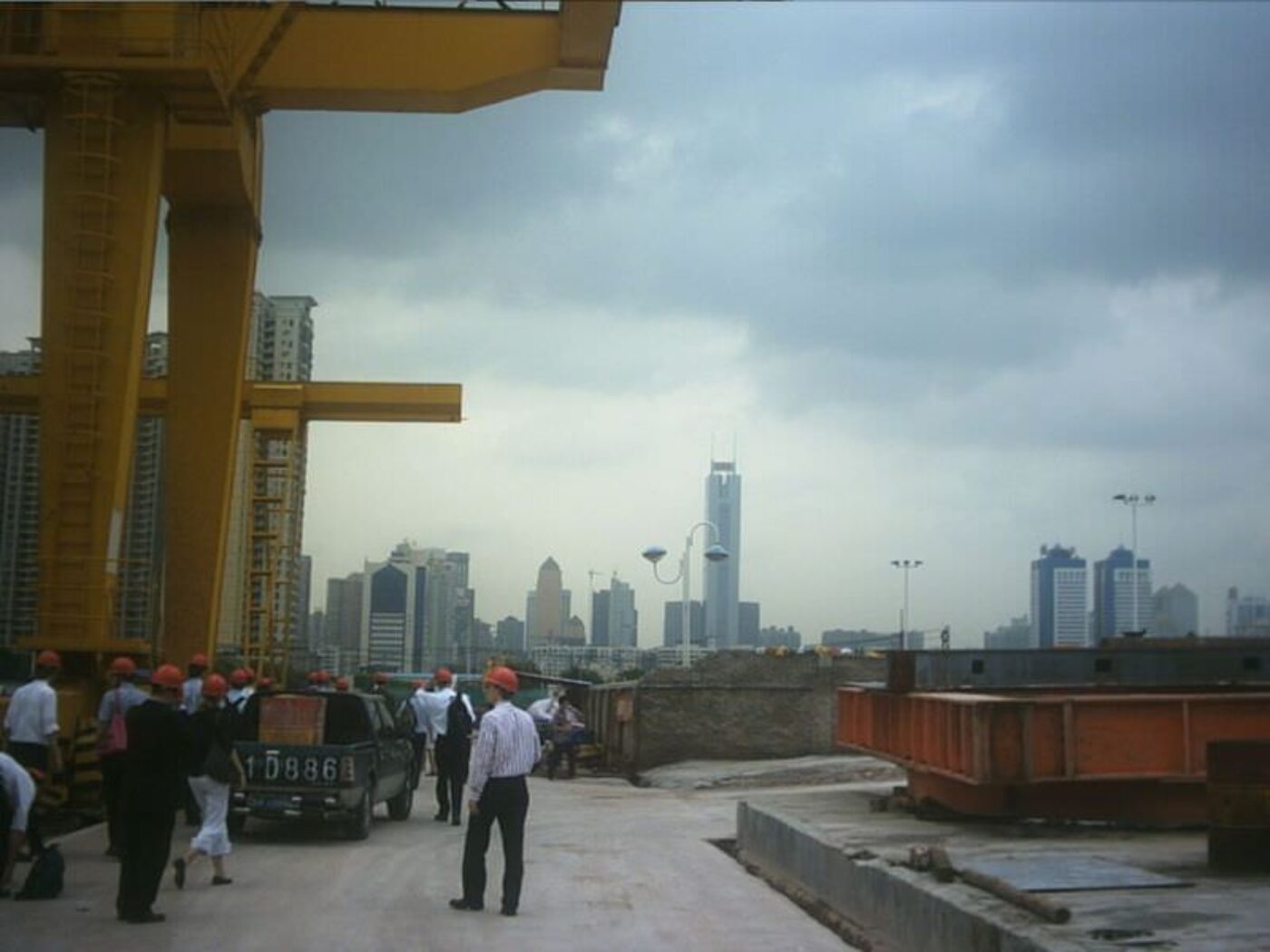 Communism is a theory of the future. Capitalism is a practice of the present. Traditionalism is a longing for the past. We are used to make a choice between these three concepts, according to character and personal interest. But what if it all happens at one place, at one moment? What if we stand still and think about it in contemporary China?

SHANGHAI has VOLUME
Launch of VOLUME in Shanghai at YinYang, 19th May 2005
by KM Tan

It all seemed a brilliant idea: getting Ole Bouman, the Editor-in-Chief of VOLUME to launch the inaugural issue behind a DJ stand in a musty Shanghai basement club filled with a curious audience nursing their bottles of QinDao, with local Shanghai architects limbering at a corner to discuss cogent issues of Time and Heritage in a city that just wouldn’t stop. As the evening unfolded, things got curiouser and curiouser down wonderland, as chaotic as a mad-hatter’s party with questions flying past their targets, comments and remarks jousting at shadows, soliloquys interrupted mid-sentence, and images disappearing into digital dark holes. Just when nobody seemed to be able to impose any abstract structure, by the end of the evening, like a typical Chinese meeting or modern city, some semblance of pattern emerged.

Ole Bouman started by challenging architects to go “beyond architecture”, beyond conventional thinking about what architecture could do; specifically beyond the notion of architecture as the art of making beautiful physical structures.

A panel of practitioners immersed in the day-to-day entanglements of making architecture in Shanghai were invited to present their takes on the themes of Time and Heritage. What if we stand still and think about the phenomenal speed of Shanghai’s urbanisation (towards what future?) and the attendant selective eradication of its pasts? Beyond resurrecting the Bund or cloying Mandarin tunes from the art deco ’30s, what attractions can Shanghai serve up from its recent experiences? What can we learn from contemporary Shanghai?

James Brearley of BAU, a hybrid Australian and Chinese practice, showed projects that tried to strategically incorporate “freedom” into them; how buildings could quickly adapt to fast changes in client’s brief and other situations. Wu Yue, a Harvard-trained professor at Tongji University, pointed to the contradictions and pressures of planning Shanghai’s urban substances with powerful images showing dense modern apartments, razed urban sites, and local everyday life. As diverse as it gets, Vincent Zhang of SWISS LEMAN, a Chinese/Swiss practice, spoke in poetic terms about imbueing his architecture with permanence, and slowness, AND flexibility. Chow I-Shin, an associate from MADA s.p.a.m., a well-known young practice, flashed through many images of their projects with practised seamless speed and presentation, suggesting how speed could be strategically employed to produce interesting architecture.

But somehow, these presentations conveyed the message that TIME or the lack of it, is being thematised as a design strategy to, again, produce beautiful architecture. Not really the “beyond” or redefinition that VOLUME tries to instigate. Of course nothing wrong with that, after all, practitioners produce buildings, that is how architectural practice is still being defined, especially here in China. Occurring at the same time elsewhere in Shanghai, AMO produced another kind of architectural aura with the “Waist Down” Prada show at the Peace Hotel. The “beyond” architects here in Shanghai, one might argue, are the city officials and district governments, with their eye constantly on increasing the city’s perceived aura in the world’s stage.

The floating discussion which followed had some in the audience up in arms. One accused VOLUME of imposing its ideas onto Shanghai’s architectural culture: what’s wrong with what we’re doing? Why tell us what to do?

Differences between Shanghai’s practices and VOLUME’s cultural practice, soon became simplified as differences between “east” and “west” or “Chineseness” and “Eurocentrism”. Nonetheless, this thread enjoyed an impassioned sustained discussion. Is the Chinese architectural practice so entangled with cultural politico-economic aspects that it becomes impossible to have any sensible DIALOGUE with the “west”? Towards the end of the evening, there was a general feeling among the crowd that the twain were on different trajectories, each equally valid.