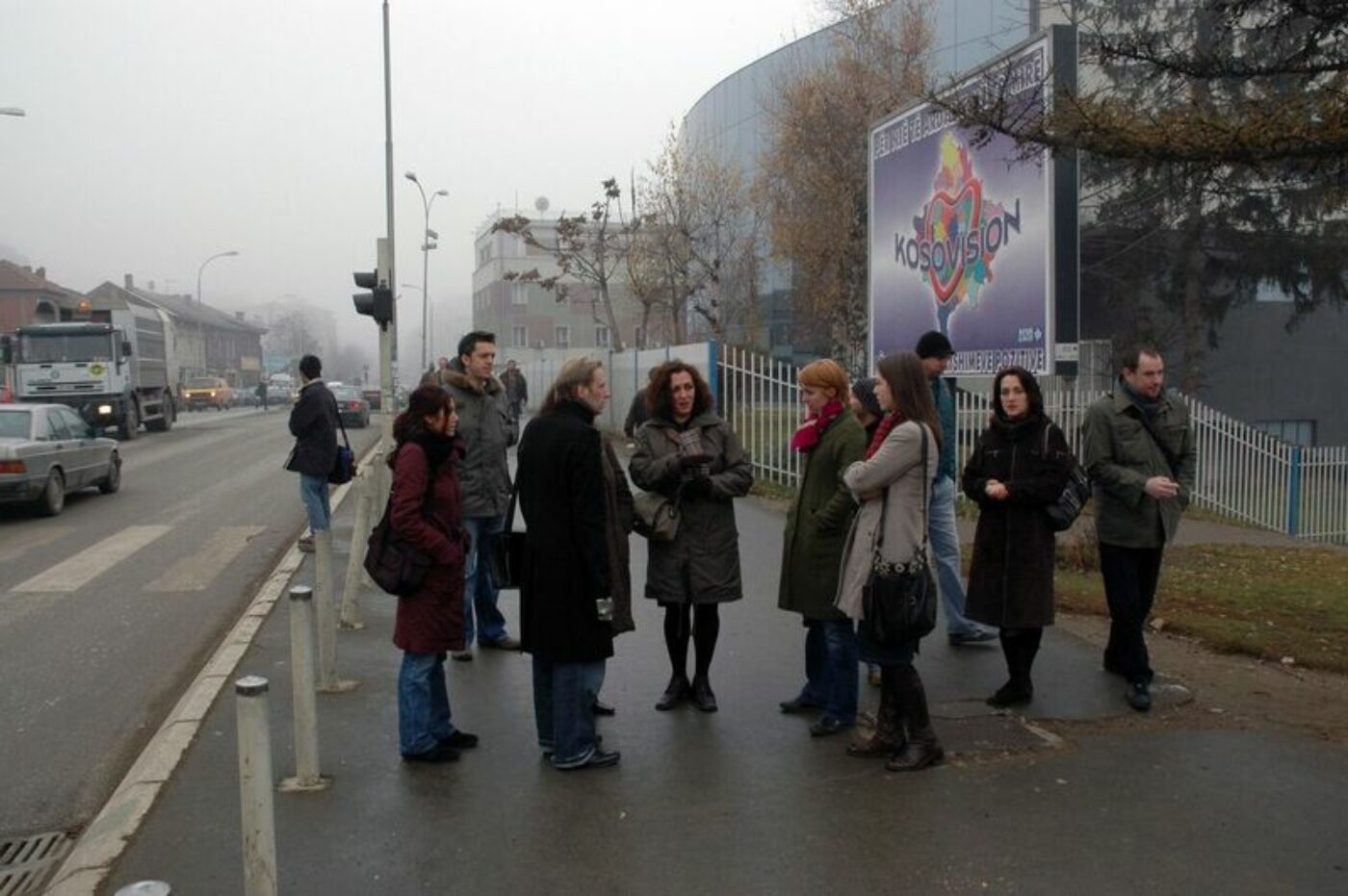 The illegal building activities after the war seriously affected the city structure of Prishtina heavily and raised social, infrastructural, and security problems. Because of the specific political situation and the lack of in its responsibility clearly differentiated institutional structures, the local administration as well as the responsible department of the United Nations (UN-HABITAT) have been not able to establish necessary standards in the building process. There is also no public awareness of the fundamental problems of illegal settlement. In this situation the project will mediate between the interests of the private developers and the necessary regulation by the state in regard to the needs of the community. The project Archis Interventions starts in Prishtina will develop solution strategies. The specific problems of regulating illegal building activities in post conflict situations will be theoretically discussed and brought into the international urbanistic debate.

Prishtina is the capital of the new independent State of Kosova. The number of inhabitants is rather unknown. Estimations vacillate between 270.000 – 500.000 inhabitants. Definitely Prishtina has doubled its inhabitants in the last 20 years. The last master plan to structure the city development goes back to 1989. At present only a “strategic plan” exists (Strategic Plan – Urban Development of Prishtina 2004-2020). On the basis of this “zoning map” the regulation plans have been drafted and the building permissions are given from 2006 on. Still there are only a few plans with a binding (law) character on which building permissions could rely on. After the war a vivid building activity took place, driven by the move of rural migrants to the city and the return of migrants staying abroad in exile during the war. The ones who had the financial opportunities, a building plot or real estate could make fast profit out of this situation. There is a massive investment also by returnees into housing, mostly for their own families. The effort of the local administration to regulate this process ended when the former director of the city development department had been shot. Presently the UN administration is focusing on the establishment of solid institutional structures, whereas the local government depending on the municipality is still in the process of tendering out master plans or regulation plans. In the meantime app. 75% of the city structure has been illegally newly built or remodeled. It is estimated that each day 10 new buildings are emerging. Serious is that most parts of the Old Prishtina have been damaged or will be damaged soon, also that basic and normal security standards are ignored (regarding fire) as infrastructures – especially water supply and sewage – are lacking or being overburdened. Also social problems are a result of an unregulated building activity – a common problem is that the building is stretched to the borders of the plot, ignoring the neighbors need. Because of these problems it is relevant to intervene with a professional knowledge into this process and to raise a public awareness either by the persons concerned as by the responsible ones.

In 2005 a local NGO has been founded, together with three architects from Kosova, Visar Ramadani, Florina Jerliu (president of the Associations of Architects of Kosova) and Vlora Navakazi (lecturer at the Faculty of Civil Engineering and Architecture, University of Prishtina) with the aim to develop solution strategies for the structuring of the city housing development. Archis Interventions / Prishtina is a local agency, which documents unprofessional (mostly illegal) buildings and looks for opportunities to upgrade these. It will intervene into the ongoing building activities by providing professional advice in the building and planning process – to provide a free support of architectural knowledge to the mostly private developers, so that the most crucial problems can be avoided. This activity will be supported by a media campaign, which will raise a public discussion about the problems which resulted from the unprofessional and mostly illegal building activity. The aim is to develop solution strategies which can mediate between the local administrations, professional developers, and single house builders. The local NGO will be supported by Archis Interventions bringing international expertise and organizing the information exchange to develop a sustainable solution strategy. The results have been partly published and brought into the international urbanistic discourse. Further publications are following. The focus of the publication is the problems related to the regulation of informal building activities in post conflict situations as the future aspects of architecture and town planning in this context regarding the specific social as political circumstances.

The project is structured into three phases. In the beginning a workshop in December 2006 with local and international experts worked out a strategic concept (funded by European Cultural Foundation and ERSTE Foundation). It will be realized in the second phase from 2008 on and contains a public or media campaign (together with the Kosovar Televisions), the provision of architectural advise as necessary planning for house builders, and the mediation between local and international professionals (Archis Foundation/Volume magazine). The aim is to raise a public debate about the city’s future and to give professional support to avoid the most crucial problems. In a second workshop in 2008 guidle lines for the legalisation process should be worked out, which can show exemplary, how building can be organized in a way, that social and physical sustainability is guaranteed. The elimination of the most relevant problems due to security and infrastructure will be in the foreground, but also a participation strategy (community building) will be needed, which is aware of the social problems which accompanying informal building activities. In the third phase (2008 – 2010) this strategy should be implemented. Good contacts with Kosovar politicians as with professionals already exist.

Kai Vöckler, Prishtina is everywhere. Turbo-Urbanism as a result of a crisis. Amsterdam: Archis (upcoming October 2008)

Preparation and conceptualization of the project / workshop. Contacts with local agents (UN, Ministry of Building, Municipality) [AI Berlin / AI Prishtina] _ Workshop I (November 2006) Elaboration of a concept for a strategy to legalize the informal settlements and to regulate the future city development in regard to housing (which includes a communication strategy to raise public awareness as a theoretical reflection for professionals, an organization structure for the architectural assistance giving by local professionals to house builders) by integrating international expertise. Result: »Manual« – strategy concept; organization structure, communication concept [AI Berlin / AI Prishtina / AI Amsterdam]

TV production / Kosova TV Result : Weekly distribution at TV for about 2 months [AI Prishtina] _ Architectural support (Advise and planning support by local architects for house builders) Result : Prevention of the most crucial infrastructural and constructive problems; building confidence [AI Prishtina] _ Workshop II Identification of a model project. Development of a legalization concept (catalogue of criteria to judge and to deal with existing problems; flexible building law). Community Building – Development of a participation strategy. Design strategy. Result : Structure of a model project implemented 2008 – 2010. [AI Berlin / AI Prishtina / AI Amsterdam] _ Publication as an issue of Volume magazine (Dutch/English) together with a special edition in Albanian. Theoretical reflection of the project and its strategy by bringing it into the international urbanistic discourse by integrating the local architects and planners. R e sult : Contribution to the international urbanistic debate about regulation [AI Amsterdam] _ Exhibition at Aedes Forum for Architecture Berlin of the results of the research made by Visar Ramadani and Kai Voeckler including the analysis and the strategic concept; including a film by Luise Donschen, Hamburg. English / German publication »Prishtina is everywhere«, edited by Kristin Feireiss and Kai Voeckler. Result: Contribution to the international urban discourse 2008–2010

Guarantee of the sustainability by implementing the developed strategy and its discussion in the public.
2007- Model project: Realization of the concept developed at Workshop II/2006 Guarantee of the workability of AI Prishtina as an independent working NGO as part of the global Archis Interventions network. Further development of the strategy and the project [AI Berlin / AI Prishtina]. 2009 Publication and exhibition of the results in Kosova and Germany.