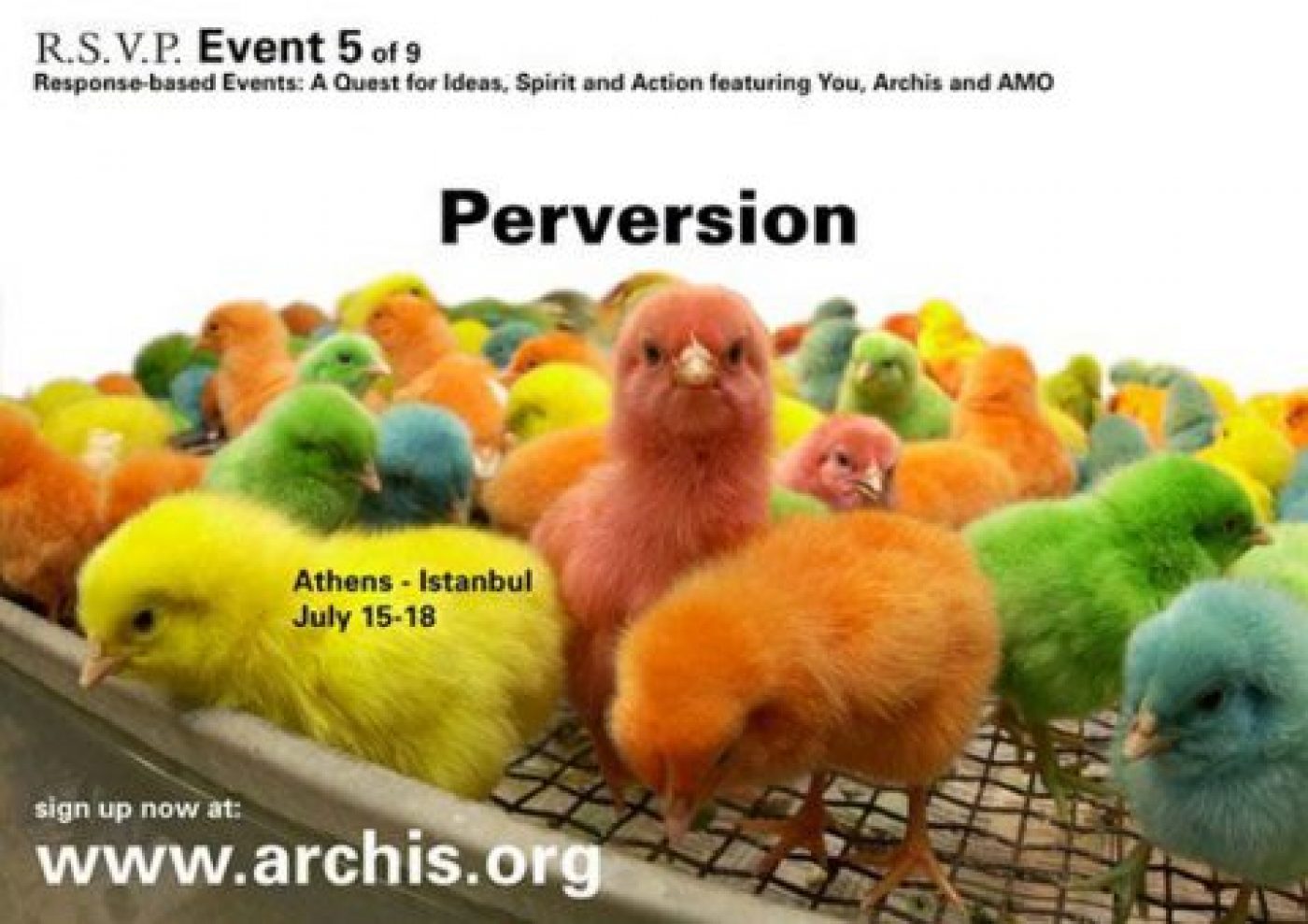 It is not difficult to find evidence for the existence of a perverse age. Psychological self-absorption, internal wrangling, unquestioned wealth, pollution and depletion of natural resources, erosion of the public domain, a lack of historical awareness, pointless regulation, excessive policy-making, cultural incest, torture as pornography…
Whatever it is, it can be defined as a ‘liberating’ era. The question is, is there anything more to liberate? Bring your ideas to the cradle of civilization.

An event about perversity and your innocence.

Perversion in our times
In 1933 a boat full of artists and architects crossed the Mediterranean Sea between Marseille and Athens. The vessel carried a decent bunch of intelligence of it¹s time. They were there to draft a definitive solution to the chaos and perversions of the Modern City. But it never came to a final text. It had to wait for another 12 years to develop in what we all know as The Athens Charter. A manifesto, which pretended to be a definitive account of the spatial problems of the contemporary metropolis. The solution was: a sharp distinction between dwelling, working, leisure and transport between them. An act of hygiene to order human life to the parameters of the machine.
Later, the Athens Charter probably became the most successful manifesto in the history of architecture. Perhaps even in universal history. Today, hundreds of millions op people live according to the principles of urban purism according to the main author, LeCorbusier. And we still can ask the ultimate question: did it really solve something?

Two days ago Archis picked up a group of Greek artists and architects to embark again in Athens and travel further east, to Istanbul. Exactly as in the ancient days: by boat and carriage, over the waves of the Aegean Sea, over the bumpy roads of Asia Minor, the Turkish heartland. We left the city that perhaps has been the worst listener ever to what the Athens Charter tried to tell. Athens today can be seen as a total perversion of any urban super-ego. It is known for its famous monuments of Classical Civilization, but these are by no means creating a master plan according to which the rest of the city is laid out. On the contrary, between the underground, with all its precious treasures, waiting to be excavated, and its rooftops, with all the splendid views of the Acropolis, an urban jungle exists that transgresses all accepted codes of law and order, of organization and normality. But is it really a jungle?

At least, it is also the provincial capital of a growing Empire: the European Union. We decided to leave that Empire that doesn’t want to know itself very well, that sleeps when it should be awake, and that roars when it is irrelevant, and cross its borders at a point where border crossing has been a second nature for several millennia now. We did literally, what in cultural and artistic circles have become the norm since decades: transgression, excess and other forms of putting the world upside down. We slowed down our pace, we went through nature, we spend an awful lot of time talking and discussing with the same people, in sum, what we did was very strange to our contemporary daily lives, where slowness, nature and time are among our strongest enemies. A perversion of perversion, so to speak. We also discovered something. Underneath the regime of the New Fortress Europe, that perverse act of distinction between mine and dine, between in and out, and more and more between two civilizations, there is a zone of blending, an harmani, a field of mediation between different realms of perceiving and understanding this world, that is not exclusivist. It embraces rather than resists; it is based on curiosity rather than xenophobia. It is perversion that transcends its character of abuse and becomes social. The last few days, we have been witnesses to that kind of perversion, that harmani.

Last night we crossed the Bosporus and landed in Europe again. This time not the territorial Europe of the Fortress, but perhaps the last remaining stronghold of Europe as an idea that has not been moralized to the principles of geo-politics. Or already an Asia that is not seen as a big risk, but as a big chance. Istanbul is in and out, is European and Asian, is Christianity and Islam (and much more). Istanbul is not either/or, but both/and, which perhaps will be it major asset in a world that falls back upon the politics of cultural apartheid. It is also in some way as an Athens, that resists its Charter. (And it’s Olympics!)