When the walls get voices 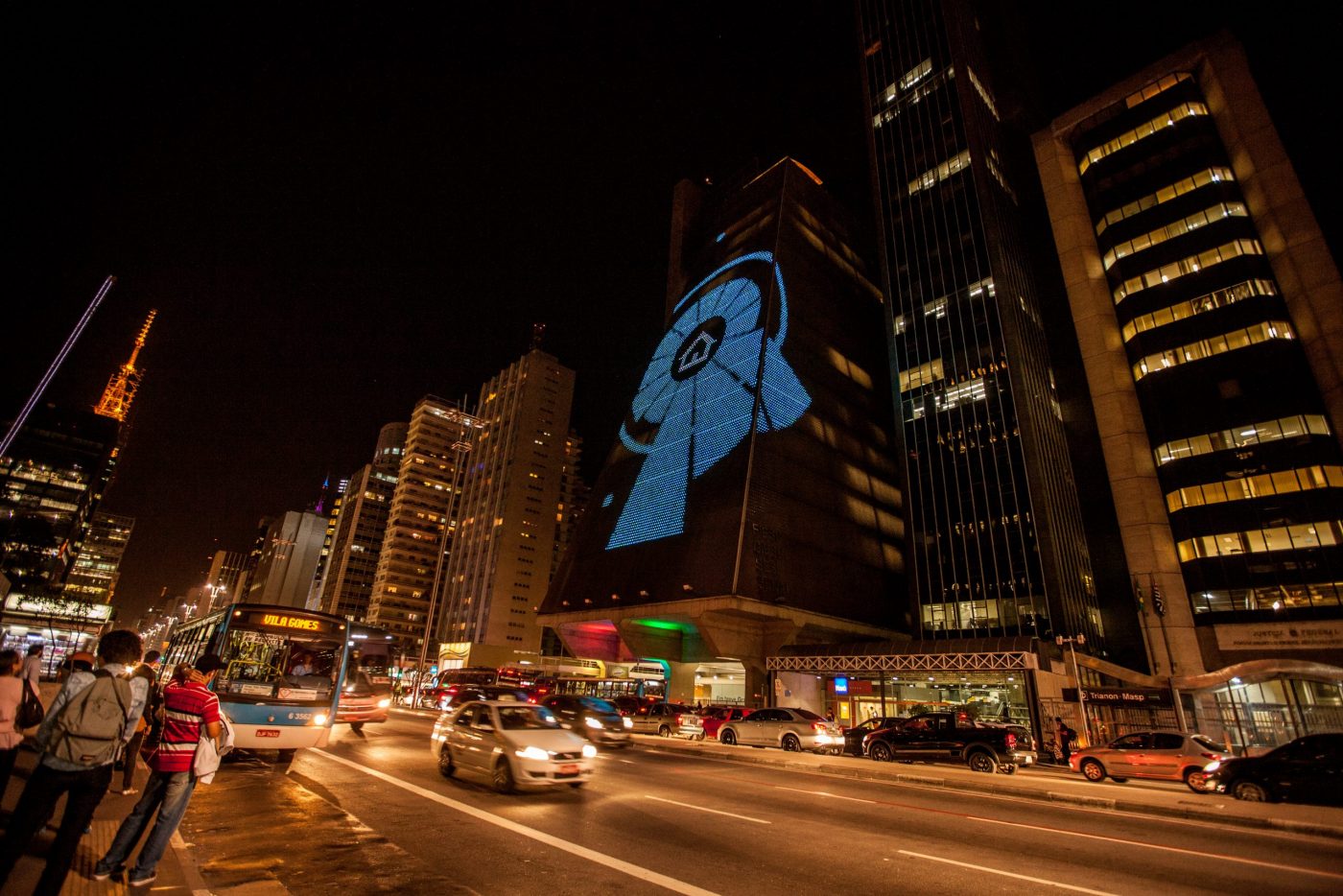 Vertical isolation is the term that best defines social distancing in São Paulo. Once Brazil’s pulsating capital of commerce, power, and culture, the city was already showing serious symptoms of economic strain. Now that the pandemic has intensified the deceleration, the millions of people who strolled around its streets and shopping centers were left watching through their windows over the absence of urban flow.

It was not only the rapid spread of the coronavirus; but also the flames in the Amazon and Pantanal that devastated thousands of square kilometers, resulting in the record deforestation of the national territory. Facing the biggest economic, political, environmental and health crisis, Brazilian society saw the need to reinvent ways to protest, to resist, and to live away from the streets.

Prevented from taking the streets and showing their discontent, the population opted for banging pots and pans from windows and balconies. During the president’s first pronouncement after the pandemic confirmation, several cities in Brazil registered similar protests questioning the federal government’s response to the virus.

Polemic messages, usually distributed through posters and graffiti, were instead communicated through lumens, and projected onto the sides of residential buildings with beamers. Besides achieving virality on social networks, the projection of protest messages had the advantage of being visible from afar, and therefore communicating to a large audience. This aspect was crucial for the morphology of the largest Brazilian cities considering that over the last 50 years they experienced an accelerated process of verticalization, and consequently an increase in demographic density (in the middle-class residential areas of São Paulo, it is not uncommon to have clusters of 8-10 buildings, each with 12 floors, with 4 apartments per floor).

During the last year visual artists, VJs, and a legion of first-time operators have taken urban projection as a form of protest, providing a consistent collective experience in the midst of social isolation. The “Projetemos” Collective stood out at the beginning of the pandemic, by creating an Instagram profile where dozens of images were posted and broadcast, functioning as a virtual manifestation of multiple initiatives. The Collective’s work encouraged anyone with a projector to transmit luminous messages of different kinds – be that of protest, affection, motivation, public health awareness, or against fake news. More experienced artists and VJs provided beginners with didactic guidance on how to project, while those who preferred to create their own content could simply post and tag @projetemos.

The coordinated effort created the largest collaborative action of urban projection to date: during the most rigorous weeks of lockdown the collective gathered more than 200 contributions, allowing each person projecting from its own window to reach a visibility spanning all over Brazil.

Despite having recently become a communicational and aesthetic phenomenon, activist urban projection in Brazil did not emerge during the [Covid-19] quarantine. In 2013 the collective CoLaboratório projected the mathematical symbol of emptiness onto the façades of uninhabited buildings in downtown São Paulo. The purpose of the luminous action ‘Conjunto Vazio’ was to clearly identify empty buildings in order to promote renovations and occupations, attracting residents, artists, and students, as well as innovative and creative businesses.

During the large demonstrations against corruption that mobilized Brazil in 2014 (triggered by the fare increase of public transport) the ‘Projetação’ Collective – made up of mostly women – became known for projecting messages on a variety of surfaces (buildings, police cars, trees). The words and phrases often emerged from the crowd, and were transmitted along the path through the use of ‘mobile combos’ (a computer, a projector, and a generator). In addition to promoting the engagement of protesters, the messages were inevitably broadcast by media companies and TV stations during the coverage of the events.

Around the same time, the permanent media façade SESI Digital Gallery was installed on Avenida Paulista, the country’s largest and busiest avenue, with the purpose of raising social and cultural issues; offering situations of critical reﬂection and engagement with the city’s urban spaces.

An exemplary use of this was the work ‘Paulista Invaders’1, which occupied the LED façade to address two of the main urban problems at the time: vehicle traffic and air pollution. The project, a reference to the iconic 1980s videogame Space Invaders, sought to open the discussion about using bicycles to help relieve the roads from traffic. The initiative raised questions relative to the quality of life, health, and air pollution as well emphasizing the fragility of cyclists who occupy the street space: an  actual accident occurred just weeks prior to the opening in which a cyclist was run-over. Similar to the videogame, the player needed to prevent the invasion of automobiles approaching from above, and defend the bicycle lanes at the bottom of the LED façade. In the following year, the construction of a bike path on Paulista Avenue began.

Another example of the use of the monumental façade was the work ‘Smart Citizen Sentiment Dashboard’2, which translated people’s opinions about urban quality of life into a simple, informative visual language, using a data-feed system. The RFID sensor embedded within the “bilhete único” (municipal public transport card) now allowed citizens the opportunity to express their level of satisfaction with safety, transportation, environment, housing, and leisure.

After decades of massive and extremely disorganized invasive advertisements in public spaces, with billboards and rogue publicity of any kind, it is worth mentioning that in São Paulo there are now specific standards to protect the urban landscape. In 2007 the Clean City Law was passed to regulate and prohibit any advertising in the public space – including ideological propaganda – claiming the right to live in a city that respects its urban space, architectural heritage, and integrity of the buildings. Today, advertising spaces are only allowed in designated areas, at public transportation stops, and on city clocks, and every action or urban intervention – including those of strictly cultural nature, and without brand display – need to have content approved by a municipal committee.

With the spread of the pandemic no museum or cultural institution in the world was prepared for the consequent exodus of public, no matter how digital their presence was before. With the closure of cultural centers, the absence of nightlife, and the many activist experiences using beamers (conceptually violating the Clean City Law), the atmosphere blossomed into a number of spontaneous urban media-art actions and culture guerrilla events. Mere membranes of private and public space before the quarantine, the windows came alive as spaces of protest, spaces of performance, spaces of community socialization like an affective interface.

In this context, the ‘SP_Urban Arte Conecta’ emerged, a collaborative festival of urban artistic transmission. The pandemic pot-banging protests regularly brought people to the windows, and the artistic projections began, taking advantage of a society gazing at the walls and gables from the nearby buildings. The ‘Arte Conecta’ was created to promote a creative breath of fresh air in the new routine, opening colorful windows into human imagination. Through different points of view, it sought to reflect the challenges imposed by the new social conjuncture and thus, contribute to further elaborating the strategies of balancing collective development with human existence. With the motto “It is necessary to imagine, to daydream in order to enhance the human capacity to plan possible futures”, the festival made use of the communicational potential of the urban media and the massive engagement in social networks to disseminate authorial and critical media art. To further maximize its impact, the program was broadcast synchronously in up to nine locations across four Brazilian cities, using projectors beaming from the apartment windows of artists and collaborators.

Shortly after, in Rio de Janeiro, the MOV Festival came into existence, aiming to move the independent art scene and bring it to those in social isolation. The cinema screen also migrated from the textile to the concrete: groups of filmmakers and producers such as Cinema de Fachada, SP_Corona Filmes and Cine Janela, started organizing projections of various movie genres, censorship free and subtitled, including QR codes to accompany the audio.

The already politicized pulsating scene of urban projection mixed with the global Black Lives Matter movement, reinstated the citizens indignation over police repression and relentless violations of human rights in Brazil. In view of this, the Municipal Secretary of Culture of São Paulo itself promoted the action of projection, to give a new meaning to controversial monuments and emphasize the voice of black and indigenous artists. The exhibition ‘Voices Against Racism’3 used monuments absent of night-lighting as the physical support for the projections, showcasing artistic expressions usually invisible to the mainstream narrative of history.

The intervention ‘Brasil Terra Indígena’, by the indigenous artist Denilson Baniwa, reinterpreted the ‘Monumento das Bandeiras’, a tribute to the men who explored the interior of the country hunting indigenous people for slavery and destruction of quilombos: images of plants, spiritual beings, and primordial local animals – which continue to live there, but just not in plain sight – slowly rising above the unlit contours of the monument. In Baniwa’s own words: “Even in the attempted literal and symbolic crushing that the monument presents, and through the processes of exclusion from the city, which are quite racialized, removed scenarios and excluded beings are projected as images on the concrete that builds it.”4

‘Coletivo Coletores’ used another controversial statue in remembrance of Borba Gato, (the 17th century bandeirante explorer responsible for massacres, rapes and the fire of indigenous villages) for their action ‘Monumento pra quem?’. Transforming the sculpture into a hollow structure – by the means of videomapping – the projected images revealed a sort of ‘historical x-ray’, containing a fresh iconography singing the memories of resistance of the excluded, violated, and forgotten ones throughout history.

The aesthetic occupation of gables, monuments, and urban structures reveals the power of civic discourse and cultural production: Despite the challenging urban planning of São Paulo, and the limitations imposed by social isolation, the Brazilian civil society discovered and developed new languages to resist.

Volume 59 – Futures Implied is the result of a collaboration between Volume and the Media Architecture Biennale. This year’s edition MAB20 will take place from June 24-July 2nd as an online event. For more information about the program, see www.mab20.org

Marília Pasculli is a Brazilian independent curator, co-creator and artistic director of the Verve Cultural, and representative of large digital art exhibitions in São Paulo.