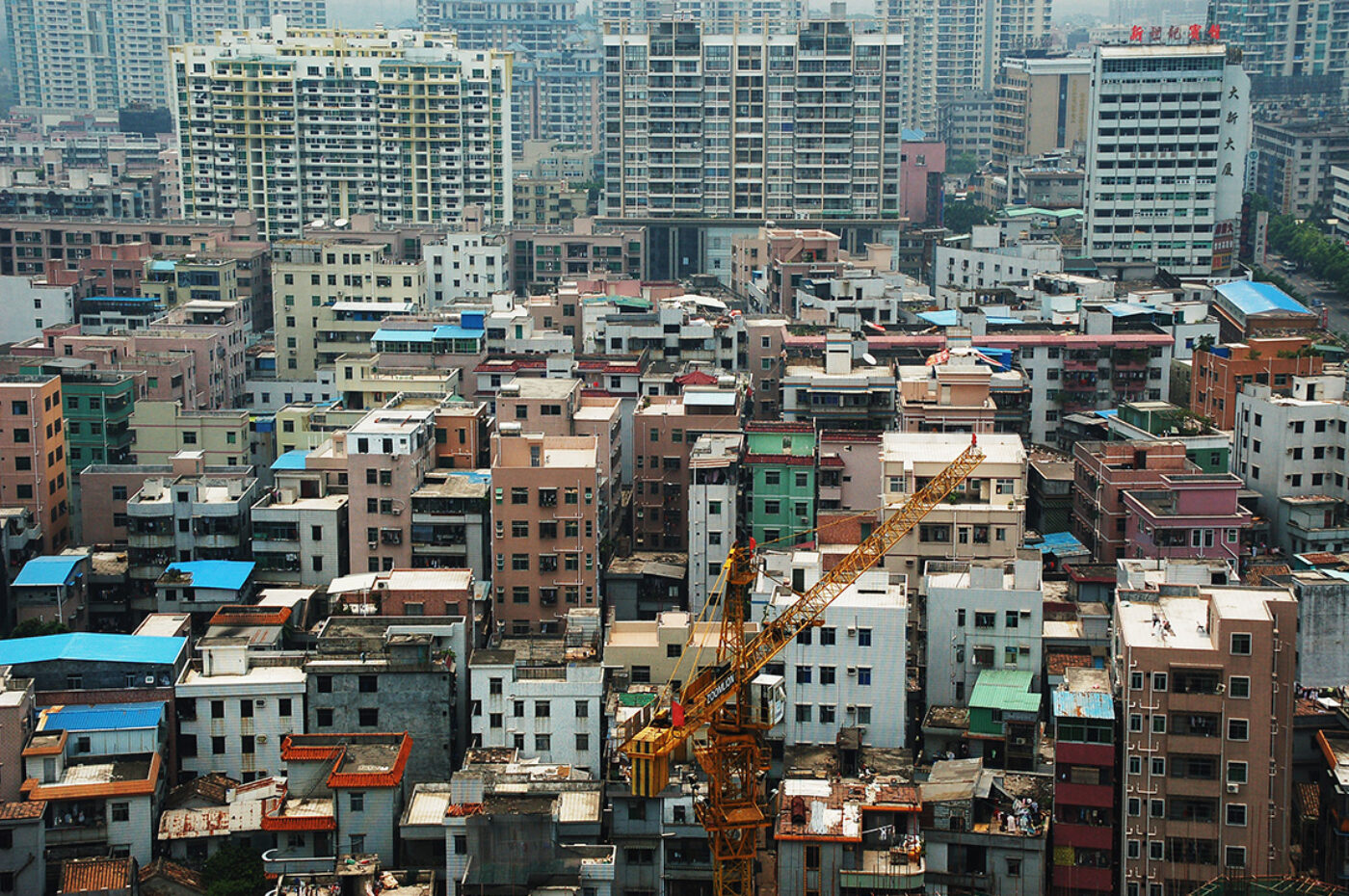 As supplement to Volume #54: On Biennials, we published a catalogue of the first seven Bi-City Biennales of Urbanism\Architecture (Shenzhen). Juan Du, one of its curators and contributors from the first one on reflects in this publication on the conditions that surrounded the start of this biennial.

The year 2005 was not a particularly auspicious year for the world. There were terrorist threats in London, protest riots in Paris, Hurricane Katrina in the US, as well as earthquakes and tsunamis in multiple Asian countries. In Shenzhen, China’s southern city, there were numerous fundraising efforts for cities devastated by natural disasters both at home and abroad.

However, 2005 was a celebratory year for Shenzhen.

Established as the City of Shenzhen in 1979 and China’s first Special Economic Zone in 1980, the year 2005 was the SEZ’s 25th anniversary. Shenzhen’s 25 years of development were instrumental in pioneering successful reform policies for the entire country.  In recognition of the milestone, the city hosted a number of high profile domestic and international figures, starting with January’s visit by Chinese Premier Wen Jiaobao. Throughout the year there were city-sponsored galas, Chinese folk concerts, Italian tenor concerts, architectural awards ceremonies, and the first Shenzhen Biennale of Architecture and Urbanism. There were plenty of indicators to justify the congratulatory celebrations. From 1979 to 2005, Shenzhen’s population growth accelerated dramatically. From a rural border town with a population of 300,000 in 1979, Shenzhen had eight million inhabitants by 2005. The city was also an economic standout even amongst the rest of China’s vigorous economy. In the five years leading up to 2005, Shenzhen’s average annual GDP growth rate was 15%, more than double China’s national average. This was already ‘slow’ compared to the 40% annual GDP increase during the city’s first two decades. In 2004, Shenzhen’s GDP reached 342.2 billion yuan (41 billion US dollars), an increase of over 17% from the previous year. The city’s economic engine was driven by the thousands of factories manufacturing goods for export all over the world. In 2005, the seaports of Shenzhen were processing over 13 million shipping containers, making it the fourth busiest harbor in the world.

However, 2005 was also a year of crisis for Shenzhen.

While many in Beijing and around the country had great expectations that Shenzhen would continue to perform economic miracles, Shenzhen’s top officials sounded an alarm over the city’s mode of economic development and urbanization. During the country’s most important national political event in March 2005, namely ‘The Two Sessions’ – The National People’s Congress and Chinese People’s Political Consultative Conference – Shenzhen’s then mayor Li Hongzhong declared that Shenzhen was unsustainable: “We hope that the GDP of Shenzhen can exceed 1 trillion yuan within ten years. However, according to the current consumption level, it needs to occupy 90% of the city’s land area and consume three times the current water, electricity, and environmental resources. The ‘Shenzhen Speed’ is unsustainable!”1

The Shenzhen mayor’s words made headlines in the local and national press, which was much more used to reporting on the achievements of the so-called Shenzhen Speed. While the declaration of Shenzhen’s ‘Four Unsustainables’ – land, water, population, and environment – may have been a surprise to some, the city had already been exhibiting the disturbing consequences in these areas.

In terms of environmental pollution, Shenzhen’s government did not shy away from admitting that all the city’s major rivers were heavily polluted. And since early 2000s, Shenzhen had experienced smog and acid rain with unprecedented frequency. From 2004 to 2005, over 70% of the city’s rainfall contained dangerously elevated levels of hydrogen ions. The coastal region had a abundant fresh water source prior to the 1980s, even exporting water to the neighboring Hong Kong, By the 2000s, Shenzhen (and Hong Kong) were having to rely on underground pipes that transported fresh water from Dong Jiang, or East River, nearly 300 kilometers north of the region. In terms of population, while in the 2000s Shenzhen’s government census reported only eight million inhabitants, it was an open secret that the actual population figure was much higher. For there was a large non-permanent, or floating, population in the city. The Shenzhen government faced local pressure to recognize the floating population that did not have official registration, or hukou in the city, an act that might have doubled the city’s official population. (By way of comparison, Shenzhen’s permanent population in 2017 is officially a little over 11 million, but the total population is generally accepted to number between 20 and 25 million.)2

In a city that had for over two decades relied on cheap land to attract businesses and investment, Shenzhen’s GDP growth rate closely correlated with the rate of land consumption. Other than mountainous regions and water bodies, land that was mostly agricultural in the 1980s had been quickly consumed by the concrete and asphalt of factories, offices, housing, and other urban infrastructures. By 2005, land available for new development was nearly depleted. Shenzhen’s total urbanized land area reached 939 square kilometers in 2005, 50% of the city’s total territory.3 In its efforts to find alternatives to land development-led urbanizations, the city government for the first time urged for ‘Shenzhen Quality’ instead of ‘Shenzhen Speed’.  A series of top-down, government-led and bottom-up, community-led enterprises and initiatives were carried out to help the city transition from labor-intensive manufacturing to other economic sectors such as services, finance, technology, and cultural industries.

Of all depleting resources, the most critical for Shenzhen was land for urban construction and development. To generate alternative land resources, the city turned to ‘older city districts’ – such as disused factory sites, ‘aged’ commercial centers, as well as the city’s ubiquitous urban villages. These areas were deemed to be ‘under-developed’ for they were mainly residential and commercial areas with the cheapest rent and lowest-income residents. Yet, the urban villages commonly held the highest density both for population and building footprints.

In the year 2005, the municipal government and Shenzhen Urban Planning Bureau released the first Comprehensive Urban Planning Outline for Urban Village in Shenzhen (Old Villages) 2005-2010.4 Thus began the city’s campaign to demolish the city’s 2000 urban villages, characterized by Shenzhen’s then Party Secretary Huang Liman’s declaration that the urban villages are Shenzhen’s ‘poisonous tumors’. This sentiment was accepted and shared by the general public during the 2000s, often under the pretext that the urban villages were partly responsible for Shenzhen’s urbanization problems: “Due to the existence of urban villages, Shenzhen, the 20 year-old ‘young man’, has been confronting a series of social problems usually only found in old cities, ranging from traffic congestion,environmental pollution and problematic public security.”5

The year 2005 was a paradoxically complex one for Shenzhen. Take the first Shenzhen Biennale of Urbanism and Architecture, an event initially intended to mark the SEZ’s 25th anniversary. The organizer of the Biennale, the Shenzhen Planning Bureau, had the reasonable expectation that the event would celebrate the city’s achievement in urban planning and architecture. Bureau officials also gave the curatorial team and exhibitors freedom and academic independence. As a core member of the curatorial team led by curator Yung Hong Chang, I have experienced firsthand some unique qualities in the city’s officials and common residents. There was a dual attitude of pride in what the city had achieved, but also humility from knowing that the city also needed to reflect and explore alternative possibilities. The officials were rather open to suggestions, even agreeing to change the site of the Biennale from the City Hall (the government’s recommended site), to some vacant factories in the OCT district.  Just two months prior to the opening in December 2005, this openness to different ideas also carried out to content, such as when I proposed adding the city’s urban villages as an independent exhibition theme. Even though this was a taboo subject matter at the time, after some initial hesitation, the official accepted the proposal. The urban village section of the 2005 Shenzhen Biennale received much support and attention from both the professional community and the general public. The Biennale was accepted as a platform for not only festivity, but also reflection, research, criticism, and experimentation.

While the Shenzhen Biennale was a formal institution launched by the city government, the actual development, from site to content, mostly informally evolved through collaborations and negotiations with curators, exhibitors, and various other stakeholders.  This particular characteristic of the Biennale reflects Shenzhen’s overall urban development, where bottom-up actions, and at times disruptions, responded to and also influenced, top-down formal planning of the city. This quality of the city is a key to understanding how the Shenzhen continued to grow and evolve, through crisis and success.

The year 2005 was a personally memorable one, when I first set foot in Shenzhen.

This piece appears in Volume 54: On Biennials.

Why we Publish (books on Biennials)*