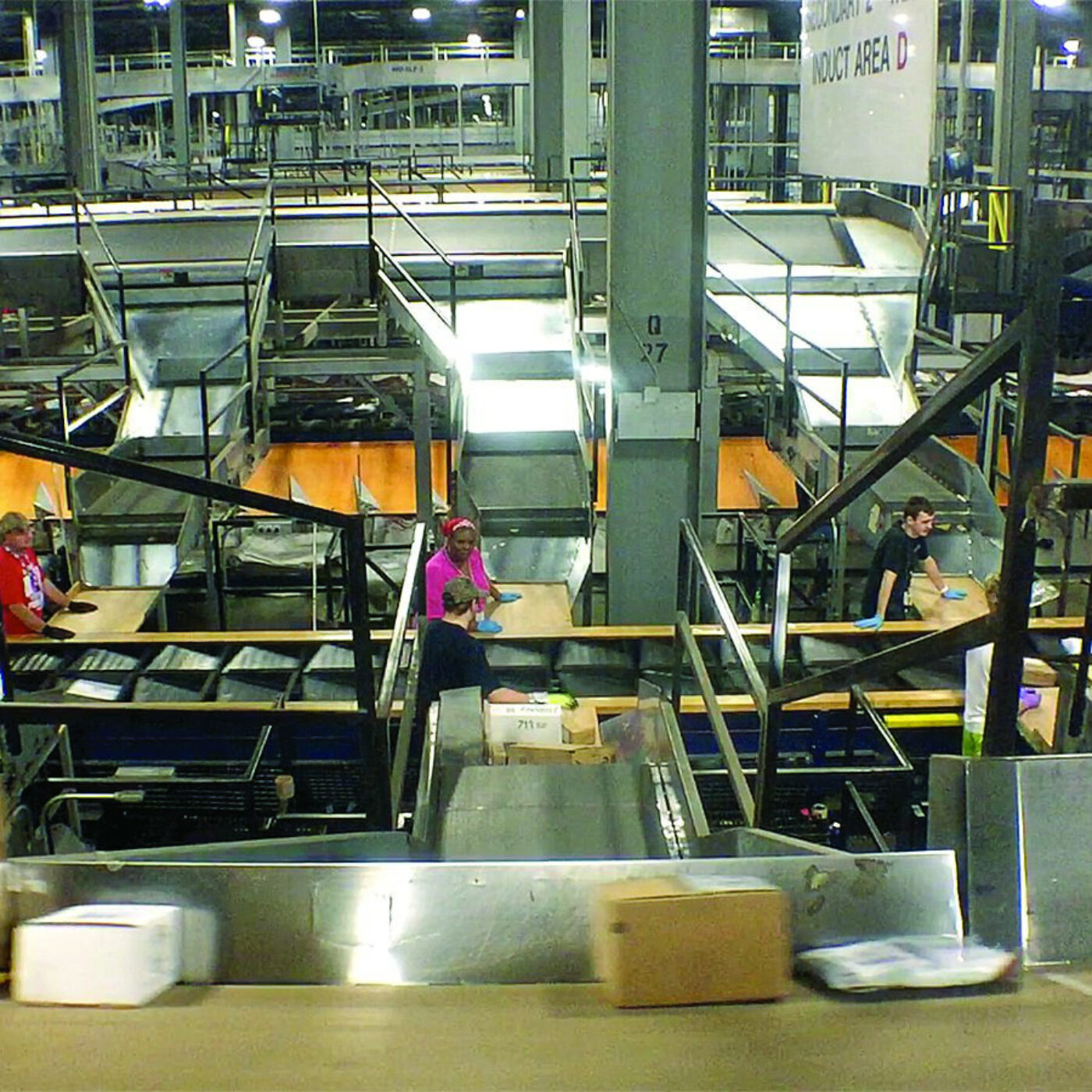 The central hub of the United Parcel Service (UPS) processes, on average, 1.6 million packages per day. That’s almost twenty per second. Such an intense flow forces operations to be internally consistent, but also demands an enormous amount of flexibility due to unpredictable externalities. What if a road is closed, or a machine breaks? Ghazal Jafari investigates the UPS’s contingency management system and looks at this logistical behemoth venturing into new territories.

For the United Parcel Service (UPS), space is valued insofar as it grounds the socio-technical assemblages that secure the company’s economy of speed. Holding one of the largest airline fleets in the United States, UPS’s services range from delivering cargo for the US Air Force and e-commerce packages to relocating endangered animal species and partaking in disaster relief. It operationalizes logistics in the space between military and civilian domains and from the scale of cargo for large corporations to small packages for individuals. UPS runs a global logistics network that crosses more than 200 countries and territories and delivers about 17 million packages every day through its planetary ring of Shanghai-Shenzhen-Anchorage-Louisville-Cologne-Dubai.[1] It participates in the making of trans-border infrastructural systems and influences national politics towards the lifting of legal barriers to transnational trade. Yet what makes UPS significant is not its volume of shipment, infrastructural capacity, or magnitude of operational precision, but rather its resiliency and acute performance within the tides of uncertainty.

The commodification of time is an old phenomenon, yet since the post-1989 growth of informational economies and the emergence of the online transactions, speed has increasingly become an economic staple.[2] As movement on the ground race to keep up with the speed of communication, corporate plans calculate profit based on saving time down to milliseconds. UPS invested millions of dollars in a real-time tracking system called ORION, for instance, to cut five minutes off their US-wide daily ground travel.[3] The synchronization of distant processes within a complex logistics network has become a pressing issue. In fact, since the inauguration of standardized time with the first British railroad in 1840, the management of large infrastructural systems has become inseparable from the problem of synchronization, which in itself is a problem of communication and control. Later, through industrial systems of manufacturing, synchronization compelled new forms of social organization inside companies and manifested in the emergence of middle management alongside analogue information processing techniques such as standard reports and accounting forms.[4]

As a very large organization with a diverse range of services, UPS has to link farsighted corporate strategies to the tactical and technical details of daily operations. At this operational level, a complex and highly precise process of staging takes place in anticipation of both long-term plans and ad-hoc maneuvers. The former includes drafting schedules, recruiting staff, organizing space, providing technical necessities, and distributing both vehicles and capital within the network. The latter is about minimizing the gap between the expected result of a plan and the effect of unpredictable events and unwanted delays, ranging from a sick pilot to volcanic eruptions and terrorist attacks. Operating in a landscape of climatic, geopolitical, and economic uncertainty, UPS defines ‘control’ not in a classical sense of ‘being in control’, but as ‘resilience’ and the capacity to change plans according to unfolding circumstances. This flexibility is contingent upon constant real-time tracking of flows and sensing of environmental dynamics. As information about the merchandise becomes as important as the merchandise itself, logistics increasingly depends on securing the flow and storage of information. Accordingly, corporate financial return can no longer be separated from its information surplus and a probe sent into the logistical landscape cannot be isolated from an understanding of its underlying knowledge infrastructures.[5] The problem of resiliency necessitates a continuous process of tracking.

Resiliency, however, is achieved not only by a high sensorial capacity but also by a ceaseless reconfiguration of the logistical landscape itself. The politics of uncertainty translates into multiple scales of spatial organization: from architectural to regional and territorial. At the architectural scale, sortation facilities act as switches within the larger network of logistics and regulate the flow of goods. Located at the Louisville International Airport, Worldport is the UPS international logistics hub, global operation center, and its most technologically advanced sortation facility. The current facility was built in late 1990s, when UPS became the largest private employer in state of Kentucky with more than 20,000 employees.[6] Scaling down the geography of the planet into zip codes along the 155 miles of conveyor belts, Worldport sorts more than one million packages per night to be sent off to more than 220 international destinations. Strategically located just east of central time zone (UTC-6), the sortation hub has access to 75% of the US population in less than two hours and can reach the West Coast in four. Growing pressure for next-day delivery and the increasing volume of packages pouring in from surrounding e-commerce facilities has compelled UPS to expand and automate their sortation facilities in Louisville and elsewhere.[7] The growing number and scale of these switches in the UPS network appears to be evidence of a massive shift in the global landscape of logistics: market uncertainty demands a higher level of operational flexibility, which in turn prioritizes constant movement of cargo over its storage in one place. There should be no surprise if, in the near future, goods are no longer stored in fixed places at all, but rather kept in constant motion between switches. Profit lies not only in speed but also adaption, and the future of logistics appears to be in the service of strategic anticipation rather than plans. 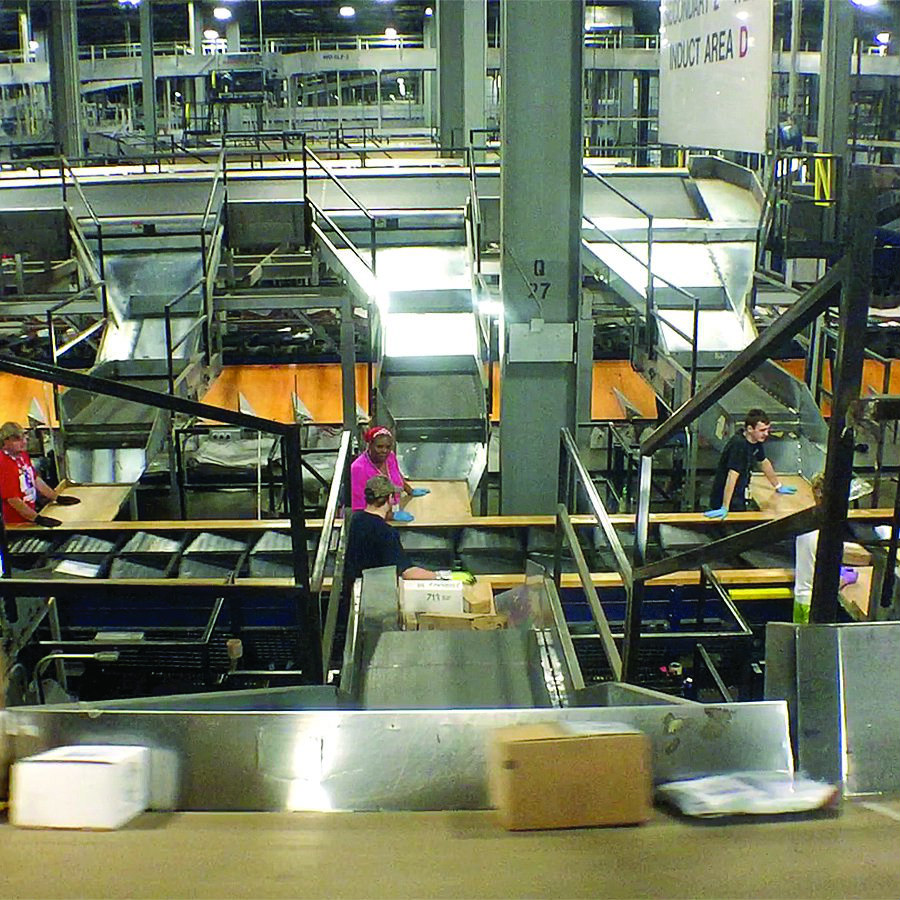 The geography of UPS’s logistics takes form through the establishment and connection of strategic sites to ensure successful adaption to market nuances and secure its operations. With no resemblance to the historical architecture of the fortress, the spatial organization of UPS appears fluid, changing according to the currents of opportunity. To intelligently allocate infrastructural investment, UPS follows market projections made by statistical models while tracking niche markets and industries. The company’s escalating interest in Jebel Ali Free Zone in Dubai, for instance, is due to the growing prospects of e-commerce in African countries in the next twenty years.[8]  These projections are complemented by the existing infrastructural and convivial conditions on the ground; Dubai was initially a fuel station for UPS between Europe and the Asia-pacific region. Not unlike Anchorage and Louisville, Dubai also offers abundant fuel reserves. The advantage of Dubai over these other locations is its lucrative legal exemptions.[9]

Despite all this, it would be a mistake to think that corporate strategies are oblivious to the particular geographic settings of these places. Financial prospects cannot materialize if the operations are interrupted by volatile environmental or political conditions. In fact, the emergence of geography as a distinct form of knowledge – of topographic terrains and natural boundaries – has been tightly associated with processes of militarization and its logistical necessities, largely in the service of territorial security. Following this historical trajectory, logistics perceives geography through the lens of defense: first to find strategic locations and then to secure against interruption.

Following diplomatic negotiations between the two countries during the 1990s, China granted landing permissions to four US airlines, for which the US Department of Transportation chose UPS along with three other companies. In search for their new air hub, UPS landed on the Clark airfield, a former US Air Force Base in the Philippines that had been active since the 1920s. UPS chose this location for three particular reasons: the Philippines’ open-skies policy, the strategic location of the base in the valley of Mount Pinatubo (which secured the base against tropical typhoons), and, with access to all Asian financial centers in less than four hours, Clark’s centrality in the Asia-Pacific region.[10] After being evacuated in 1991 due to Mount Pinatubo’s volcanic eruption, the government of Philippines converted the base into the Clark Special Economic Zone (CSEZ), which occupied almost the same amount of area as Singapore. The new zone aimed at putting the Philippines on the radar as a competitive center for finance and leisure.[11] In the last few years though, UPS has moved its air hub to the Shenzhen Special Economic Zone in order to maintain proximity to brand customers of high-tech companies who are moving inland in pursuit of cheap labor. As logistics organizations become increasingly fluid, they de-territorialize and re-territorialize new geographies by altering their economic and political dynamics.

From structure to organization

Logistics mediates the establishment of economic ‘zones’ by enabling their participation in the global economic cycle. Regional economies become more attuned to the rhythms of global politics and financial nuances at the potential expense of local economies. New territories of power are created and expressed by newly-drawn boundaries of exclusion and inclusion. Determined by access to infrastructure, local populations are left with limited choices for their means of livelihood. This probe seeks to go beyond a discourse about expanding industrial reach in pursuit of new frontiers, to include other contemporary processes of movement and change, such as economic migration due to climate change or the displacement of people caused by war. Strategies of resiliency and adaption are essentially logistical questions, yet logistics is not alone in asking them. In this sense, the way spatial, ideological, or political structures are revealed to give way to processes and organizations, logistics is an incisive method of inquiry and intervention.

This ongoing study of UPS would not have been possible without the Penny White Fellowship, granted by the Landscape Department at the Harvard Graduate School of Design. Many thanks to Jeff Wafford, UPS Public Relations Supervisor, and Steve Merchant, Contingency Department Manager of UPS Airlines. 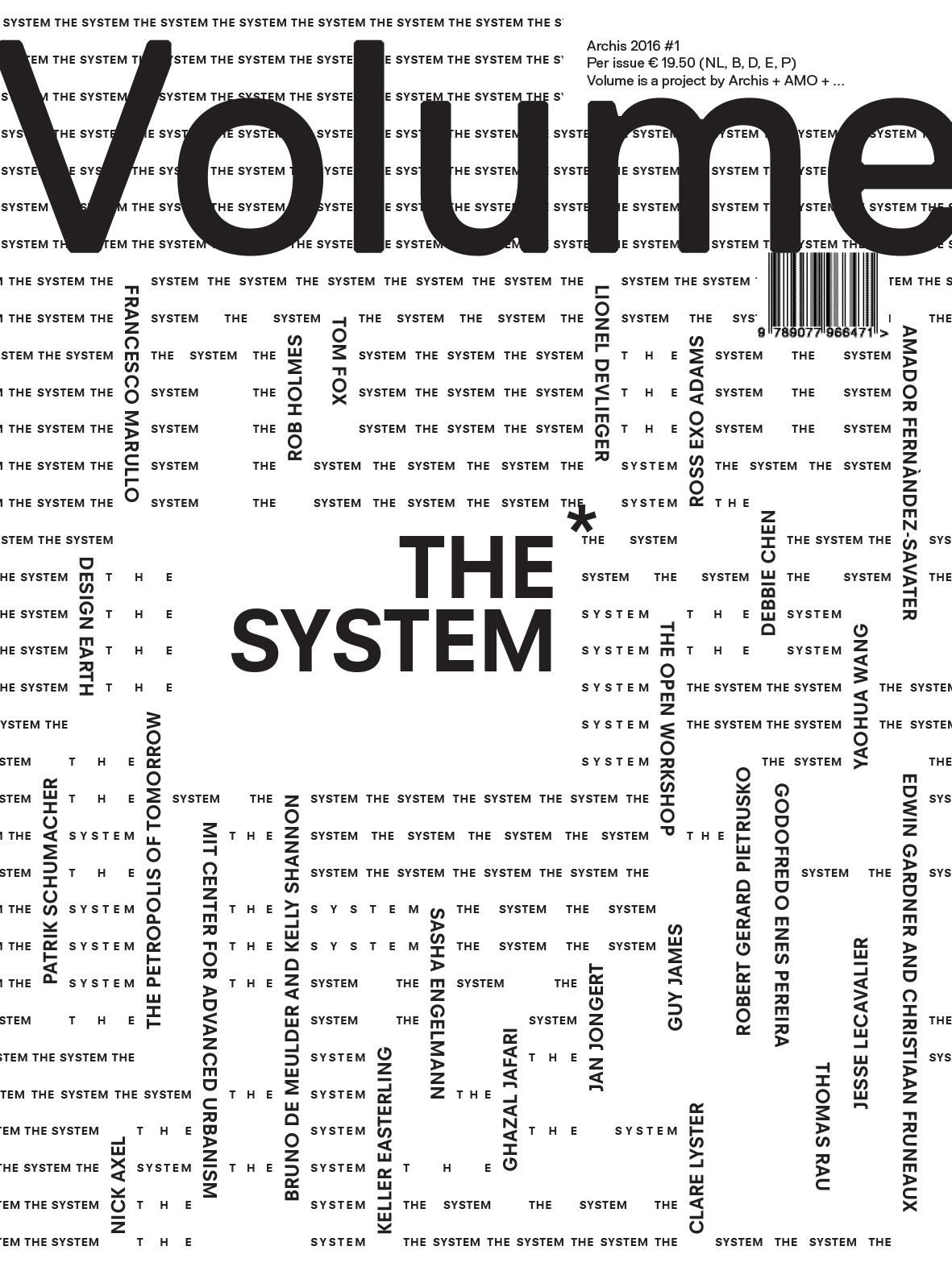 This article was published in Volume #47, ‘The System*’.

The Project of a Collective Line