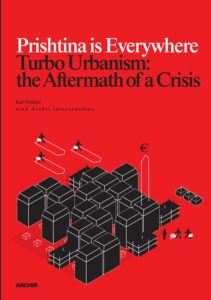 Prishtina is Everywhere – Turbo Urbanism: the Aftermath of a Crisis

Prishtina is Everywhere describes, maps and analyzes the situation in Prishtina after 1999, documents problem-solving strategies, and discusses the significance of this kind of urban development for the way urban life evolves in crisis zones. The title hints at two phenomena: firstly, urban development of this type is typical for many post-conflict situations, and secondly, most of the construction in Prishtina has been financed by remittances from family members working abroad (one-fifth of Kosovo’s entire population lives (temporarely) abroad, specifically in Germany, Switzerland, and Austria).

After NATO-led KFOR troops ended civil war in Kosovo (1999), an instant building boom changed the capital Prishtina dramatically. Within a few years its population doubled, partly as a consequence of an influx of returning refugees. Local investors profited, creating quick returns on ‘hit and run’ projects. On the fringes of the city ‘maverick urbanism’ had a different face: family clans invested family capital in large houses, built on farmland. The result was a random spread and development of the city, causing serious functional and structural problems for the future.